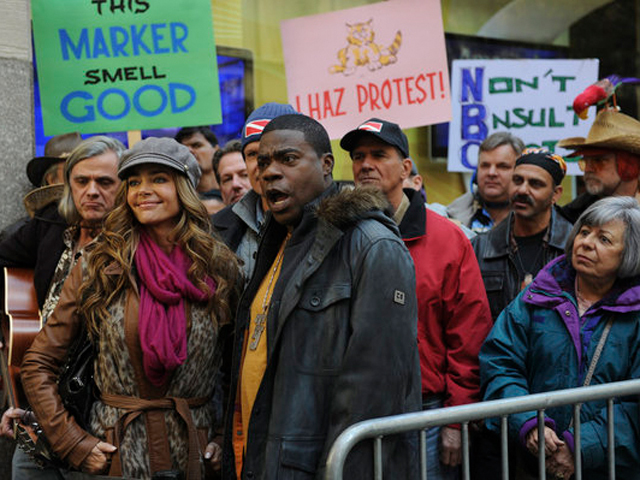 (CBS/AP) NEW YORK - "30 Rock" took aim at one of its own cast members in an episode that aired Thursday night.

On the "30 Rock" episode, titled "Idiots are People Too," Tracy Jordan (the character Morgan plays) sparked a protest after making a couple of ridiculous gay-oriented jokes at a club date.

A contrite Jordan mistakenly apologizes to the makers of Glad trash bags, rather than to the Gay & Lesbian Alliance Against Defamation, known as GLAAD.

Jordan's boss, played by series star Tina Fey, is forced to apologize for him.

"He's not capable of hate," she assures the media. "He's just an idiot who doesn't know what he's saying."

In real life, Tracy Morgan publicly apologized to his fans and the gay and lesbian community for what he called "my choice of words." He denied being a hateful person and acknowledged that "even in a comedy club" what he said went too far "and was not funny in any context." During his rant, Morgan had said in part that if his son were gay, he would "pull out a knife and stab" him.

Fey, who is also the creator and an executive producer of "30 Rock," issued a statement at the time declaring "I hope for his sake that Tracy's apology will be accepted as sincere by his gay and lesbian co-workers at '30 Rock.'"

Mirroring that real-life statement on Thursday's episode, Fey's character, Liz Lemon, chides Jordan by saying, "Do you know how many of your hardworking and dedicated co-workers are gay?"