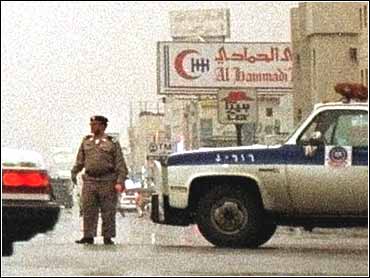 Saudi Arabia plans to apply its strict interpretation of Islamic law, which calls for the public beheading of convicted murderers, to three Westerners arrested in Saudi Arabia

The kingdom is also attempting to extradite a Saudi man arrested in Colorado in a separate case.

On Sunday, the three Westerners - a Briton, a Canadian and a Belgian - appeared on state-run Saudi television and confessed to the two November explosions, which killed a British man and injured four other Britons under mysterious conditions. Their confessions offered no motive or explanation for their actions.

Christopher Rodway, 48, who worked in a Saudi hospital, died Nov. 17 after a small explosion in the capital tore through his car. Rodway's wife was slightly injured. On Nov. 22, a bomb exploded in another car in Riyadh, wounding two men and a woman, all British workers at an unidentified company.

Interior Minister Prince Nayef said the explosives used were smuggled into the kingdom and were assembled by experts. Nine other foreigners - eight Europeans, the majority of them Britons, and a Lebanese - were arrested in connection with other crimes, he said without elaborating.

The interior minister had said Sunday that authorities had pinned down the source of the explosives and other information related to the bombings, but he did not go into details.

Nayef said diplomats from the three countries have visited the men in custody.

Omer el-Souri, consular officer at the Canadian Embassy in Riyadh, said the embassy was assisting the Canadian, William Sampson, 42. Consular officials first were allowed to meet with him Jan. 27, el-Souri said. There were conflicting reports on when he was detained, apparently in either November or December.

El-Souri said Sampson was employed as an economist with the Saudi Industrial Development Fund.

The Belgian Embassy referred all calls to the Foreign Ministry in Brussels, which has refused to comment citing a policy of not releasing names of nationals accused or arrested abroad. British Embassy officials were not available for comment Monday.

On Sunday, a British Foreign Office spokeswoman in London said she was aware of the broadcast but could not confirm whether any of the details were true.

In the Sunday television broadcast, the three men confessed to the bombings and, using a street map, they pointed out the location of the victims' homes and the blast sites.

All three men spoke in English, with a voice-over in Arabic. Their names were translated from Arabic, and except in Sampson's case, the spellings could not be confirmed.

The first man identified himself as Alexander Mitchell of Britain. He said he had received instructions to carry out the Nov. 17 bombing with the help of Sampson. He did not say from whom.

Mitchell was working at the Internal Security Hospital in Riyadh, a military medical facility, as head of the anesthesia department.

Mitchel said he planted the explosive device on Rodway's car. Then, he said he and Sampson followed the victim and his wife to a main thoroughfare where Sampson detonated the explosive by remote control.

Sampson, who said he worked as a marketing consultant, said he was ordered by Mitchell to make preparations for the second bombing with the help of a Belgian he identified as Raf Schifter.

Schifter, who worked as an emergency coordinator at another military hospital, the King Fahd Hospital for the National Guard, said he was at Mitchell's home and heard a conversation between Mitchell and Sampson about the first explosion.

Later, Mitchell told him he would need his help in the second bombing, Schifter added. He said he received an explosive device from Sampson which he was ordered to plant on a car parked near his car outside a residential complex. He said he followed the car and saw it explode.

"I immediately stopped my car behind it and helped the wounded people," he said. "What I have said is the truth."

In a separate case, Saudi Arabia will ask the United States to extradite a Saudi man suspected of killing a Saudi college student in Colorado, Nayef said in remarks published Monday.

"We hope the police in the United States will cooperate and respond to our request since all parties involved in this crime hold Saudi nationality," he added.