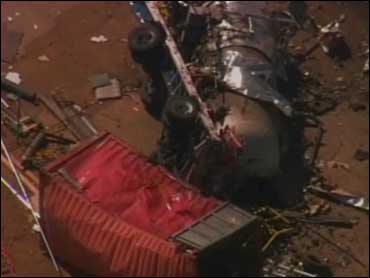 An explosion at a Mojave Desert airport during testing of a propellant system for a new space tourism vehicle left three workers dead, and has shaken a small community that prides itself as the hometown of the first private space launch.

The company, headed by maverick aerospace designer Burt Rutan, made history in 2004 when its SpaceShipOne became the first private manned rocket to reach space. Since that milestone, Rutan has partnered with British billionaire Richard Branson to build a fleet of commercial vehicles dubbed SpaceShipTwo for Virgin Galactic.

"We were doing a test we believe was safe. We don't know why it exploded. We just don't know," Rutan said.

The accident occurred during a test of the flow of nitrous oxide through an injector in the course of testing components for a new rocket motor for the SpaceShipTwo. The chemical was at room temperature and under pressure, Rutan said.

Stuart Witt, the airport's general manager who was in his office when the explosion happened, said the airport is home to several commercial space startups and is constantly buzzing with rocket and engine testing.

"What we do is inherently risky," Witt said. "These are not the days we look forward to, but we deal with it."

The airport is an important part of Mojave, an unincorporated community of about 4,000 people, said Bill Deaver, publisher of weekly Mojave Desert News. It employs about 1,500 people, he said, and is the country's first inland spaceport certified by the Federal Aviation Administration.

The airport is often crowded with parked airliners that are not in service. Its flight operations often involve unusual aircraft undergoing testing, and civilian test pilots undergo training there.

The airport has been a popular location for movie and television production. Part of the hit movie "Speed" was filmed at the airport: a Boeing 707 was blown up, in a scene that used the desert facility as a stunt double for Los Angeles International Airport.

A Kern County Medical Center official said two people died at the scene and one later died at the hospital after surgery. The three injured suffered numerous shrapnel wounds. Two were in critical condition and one was in serious condition early Friday, the official said.

Virgin Galactic president Will Whitehorn said the company expressed its sympathies to the families and declined further comment until Scaled completes its investigation.

Rutan, who arrived at Mojave after the accident, is tightlipped about his projects and gave little information about the test. But he said it had been done safely many times during the SpaceShipOne program and had been done once before for the SpaceShipTwo program.

Authorities closed off access to the blast site in a remote unpaved area about a quarter-mile beyond an airplane storage area. Video news helicopters showed wrecked equipment and vehicles at the airport in the high desert north of Los Angeles near Edwards Air Force Base.

Rutan had been secretly developing SpaceShipTwo in a hangar closed to the public. He had not publicly released a schedule for completion of the design, testing and first launch. Rutan said the accident would not change that.

Branson has invested at least $200 million for a fleet of Rutan's spaceships to send paying tourists some 62 miles above Earth for $200,000 to experience the view from space and five minutes of weightlessness. Earlier this year, Branson told a trade show the new ship would be ready within a year and, after a year of flight tests, would have its first commercial launch in 2009.

Aerospace and defense contractor Northrop Grumman Corp. owns 40 percent of Scaled and recently agreed to acquire the rest of it. The deal is awaiting regulatory approval and should close next month.

Northrop Grumman spokesman Dan McClain said the company had no comment on the explosion.