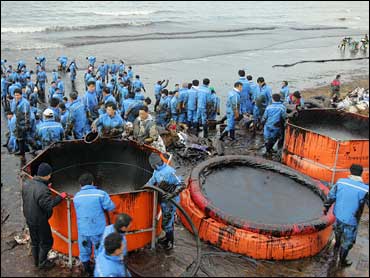 Nearly 2,200 troops, police and residents used buckets to remove the dense crude from Mallipo - one of South Korea's best-known beaches and an important stopover for migrating birds, including snipe, mallards and great crested grebes.

The Coast Guard, which was leading efforts to contain the spill, said that the area of shoreline affected by the disaster had more than doubled by Saturday evening from four miles earlier in the day.

The oil started hitting beaches one day after a Hong Kong-registered supertanker was slammed early Friday by a South Korean-owned barge that came unmoored from its tugboat in rough seas.

A total of 66,000 barrels (2.7 million gallons) of crude gushed into the ocean, more than twice as much as in South Korea's worst previous spill in 1995.

Cho Yoo-soon, who runs a raw fish restaurant at Mallipo beach, about 95 miles southwest of Seoul, said the situation was overwhelming.

"We can't even walk around here because the entire beach is covered with oil," she said, adding that a full day of clean-up efforts had made no progress. "I don't think even two months are enough to clean all this up," she said.

The affected areas are home to 181 maritime farms that produce abalone, brown seaweed, laver, littleneck clams and sea cucumbers, said Lee Seung-yop, an official with the Taean county government, which includes the beach. Sea farmers in the areas number about 4,000, he said.

"A lot of damage is feared to these farms, although we don't have an estimate yet," Lee said.

"It's helpless," Lee Pyong-gook of the Korean Federation for Environmental Movement, said of the situation. "It's a sea of oil."

He said the region is a major stopover for migratory snipe. "It was fortunate that those birds have yet to arrive," he said. He added, though, that some seagulls had been coated with oil.

The Coast Guard dispatched 62 ships and five helicopters to battle the spill, but struggled with high waves and strong winds that were pushing the sticky mass toward shore.

The accident occurred about seven miles off Mallipo. The area also includes a national maritime park.

The Coast Guard said it was unclear how many days the operation would take.

"We're doing our best to remove the contamination as quickly as possible, but it will take some time to clean up the shore because it needs to be done by hand," said Kim Woon-tae, a Coast Guard official stationed in the region.

"It's a difficult operation because weather is not good," Kim said. "We're focusing our efforts on preventing more oil from reaching the coast."

Kim said oil was still trickling out of a hole on the punctured tanker, but it would soon be sealed completely. The Coast Guard headquarters had said Friday that all three holes in the tanker were plugged. Kim did not explain the apparent discrepancy.

"This is an enormous accident ... The smell is so strong that it causes a headache," said Lee Hee-yol, a village leader at Mallipo. "We've asked the government to declare this region a disaster zone."

Kim Kyung-chul, an official at the National Emergency Management Agency, said such a declaration - which would make residents eligible for government financial aid - was not yet being considered.

The government, however, designated the oil spill a "disaster," he said, which makes it easier for regional governments in the affected areas to mobilize personnel, equipment and material to cope with the situation.

The size of the leak reported by the authorities would be about one-fourth that of the 260,000 barrels, or 11 million gallons, spilled into Alaska's Prince William Sound by the Exxon Valdez in 1989.

South Korea'a latest spill was also much smaller than one in Pakistan in 2003 when a Greek-registered ship ran aground near Karachi, leaking some 28,000 metric tons (8.2 million gallons) of crude that polluted the city's main beaches.

The Coast Guard said the South Korean accident occurred Friday morning, when a crane-carrying barge en route from a construction site lost control after a wire linking it to the tugboat was cut due to high winds, waves and currents. The vessel then slammed into the Hebei Spirit oil tanker. Neither ship was in danger of sinking and there were no casualties.

The tanker had been at anchor and carrying about 260,000 tons - about 1.8 million barrels - of crude oil to be loaded into boats from a nearby port.

Cho, the raw fish proprietor, said restaurants in the area were closing, adding that she could not pump fresh sea water into her tanks.

"Without fresh sea water the fish will start going bad after a week," she said.