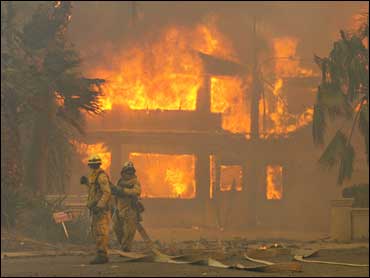 More than a quarter-million people were urged to flee their homes across Southern California on Monday as wildfires blown by fierce desert winds raced over the landscape with terrifying speed.

In San Diego County, 500 homes and 100 businesses have already been destroyed by fire.

More than a dozen wildfires have hit Southern California, killing at least one person, injuring dozens more and threatening scores of structures.

"We have more houses burning than we have people and engine companies to fight them," San Diego Fire Captain Lisa Blake said. "A lot of people are going to lose their homes."

There are so many fires burning with such intensity that firefighters are overwhelmed, reports CBS News correspondent Bill Whitaker. In the Lake Arrowhead resort area, east of Los Angeles, flames destroyed nearly 130 homes in an area where hundreds burned four years ago.

Not far south in Orange County, adds Whitaker, children clutching their parents' hands were forced to run from Foothill Elementary school to escape a fast-moving fire bearing down on the sprawling city of Irvine.

About a dozen blazes erupted over the weekend, feeding on drought-parched land from the high desert to the Pacific Ocean. One person was killed and several injured in a fire near the Mexican border, and dozens of structures have burned across the region.

Warm temperatures and strong winds created "dramatically worse" conditions overnight as flames shot 200 feet high, said Bill Metcalf, chief of the North County Fire Protection District. Some of the worst damage was in Malibu, where a church, homes and a historic castle were destroyed.

The fire briefly surrounded Pepperdine University, forcing students to take shelter in the gym, reports Whitaker. The strong winds have also created firestorms in other communities. Horses were let out to avoid being overrun.

In Orange County, a 1,049-inmate jail was evacuated because of heavy smoke, sheriff's spokesman Jim Amormino said. Inmates were being bused to another facility in Irvine.

The fires have burned about 100,000 acres in San Diego County, said county Supervisor Ron Roberts. Across the region, 40,000 acres - or 62 square miles - had burned by Sunday.

In many cases, crews could not begin to fight the fires because they were too busy rescuing residents who refused to leave, fire officials said.

"They didn't evacuate at all, or delayed until it was too late," Metcalf said. "And those folks who are making those decisions are actually stripping fire resources."

More than a dozen people were being treated at the UC San Diego Medical Center Regional Burn Center for burns and smoke inhalation, including four fighters - three in critical condition, officials said. Some of the injured were hikers, and others may be illegal immigrants.

One blaze devoured more than 5,000 acres in northern San Diego County and forced the evacuation of the community of Ramona, which has a population of about 36,000.

"The winds are up, it's very, very dangerous conditions," San Diego County spokeswoman Lesley Kirk said. "Fires are popping up all over the place."

Qualcomm Stadium, home to the NFL's Chargers, was added to a growing list of evacuation centers.

When flames consumed the Malibu Presbyterian church, it was a change in the wind that brought destruction.

The powerful, dry winds typically blow between October and February and peak in December.

"For it to be this strong for so many days is unusual," said Stuart Seto, a weather specialist with the National Weather Service in Oxnard.

In Malibu, about 700 firefighters worked to protect hundreds of homes in several upscale communities nestled in the hills. About 1,500 people were evacuated and the blaze destroyed a church and several homes, one of them the landmark Castle Kashan, a stately fortress-like home with turrets and arched windows. Chunks of brick fell from the exterior of the burning building overlooking the coast.

The castle belonged to Lilly Lawrence, the daughter of a former Iranian oil minister. She said she was able to gather a few things before the fire engulfed her home, including some jewelry and memorabilia.

Countless heirlooms and priceless antiques were lost but the firemen did manage to save photos and Elvis Presley memorabilia, reports CBS National News correspondent Hattie Kauffman.

She didn't seem too worried about losing most of her belongings in the fire.

"My parents taught me not to allow my possessions to posses me," Lawrence told KABC-TV. "So, that's the story. The house is a house."

The fire is expected to burn for another two to three days, he said. Until the blaze is extinguished, "there will literally be thousands of homes that will be threatened at one time or another," he said.

The fire may have been started by downed power lines, Capt. Mike Brown said.

"This is a conflagration we knew was going to come at some point," Los Angeles County Supervisor Zev Yaroslavsky said at a Malibu press conference Sunday, noting Southern California's ongoing dry spell. "We were cruising for a bruising. We are very, very lucky as we stand here tonight that the damage has been as limited as it has been."