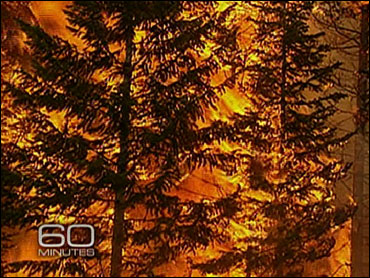 The wild fire that threatened Los Angeles this past week is not a typical fire: it's what is being called a "megafire," and scientists now say we should brace ourselves for more and more of these fires in the coming years.

In truth, we have never seen anything like them before - forest infernos ten times bigger than the fires we're used to seeing. Two years ago, during one of the worst fire seasons in recorded history, Scott Pelley went out on the fire line to see why so much of the American West is burning.

The men and women facing the flames are elite federal firefighters called "Hotshots."

Nationwide there are 92 hotshot crews of 20 members each. 60 Minutes found a group of New Mexico hotshots in the Salmon River Mountains of Idaho. They had set up camp in a burned-out patch of forest with fire raging all around. They were hitting the day, exhausted, halfway through a 14-day shift.

Leaving camp to scout out the situation, the firefighters anticipated a mess and they found it: the valley was engulfed in smoke. The flames blew through the firebreak lines they dug the day before.

"We were trying to turn the corner yesterday, and that's when it kind of blew out. I think we got more ground over here that's been taken. Any questions?" a firefighter said.

No question, this day the fire won. It surged across the mountain, forcing the hotshots to evacuate. All across the West, crews are playing defense, often pulling back to let acres burn, but standing firm to save communities. One stand this season (2007) came in August at Ketchum, Idaho. Forecasters said it was 99 percent certain Ketchum would be lost if nothing was done. Some 1,700 local, state, and federal firefighters came from across the nation, working around the clock from a mountainside camp.

Residents were evacuated, as 300-foot flames headed for homes.

60 Minutes joined up with Tom Boatner, who after 30 years on the fire line, became chief of fire operations for the federal government.

"A fire of this size and this intensity in this country would have been extremely rare 15, 20 years they're commonplace these days," Boatner says.

"Ten years ago, if you had a 100,000 acre fire, you were talking about a huge fire. And if we had one or two of those a year, that was probably unusual. Now we talk about 200,000 acre fires like it's just another day at the office. It's been a huge change," he adds.

Asked what the biggest fires now are, Boatner says, "We've had, I believe, two fires this summer that have been over 500,000 acres, half a million acres, and one of those was over 600,000 acres."

"You wouldn't have expected to see this how recently?" Pelley asks.

"We got records going back to 1960 of the acres burned in America. So, that's 47 fire seasons. Seven of the 10 busiest fire seasons have been since 1999," Boatner says.

"You know what? It's hotter than hell right here," Pelley remarks.

"It's been pretty damn hot," Boatner says. "You can imagine the challenge for young men and women with hand tools like this to come up here and put out a fire like this, but there's thousands of people down there with multimillion dollar homes that are counting on them to do that."

It was 20 years ago that firefighters got their first glimpse of what was to come. In 1988, a third of Yellowstone National Park burned. Since then, fires have broken records in nine states. Several megafires, like one in Arizona, have burned over half a million acres each.

Why are there more of these fires? Turns out the Forest Service is partly to blame with a policy it started 100 years ago.

The policy was to put out all fires immediately. "Because we so successfully fought fire and eliminated fire from this ecosystem for a hundred years, because we thought that was the right thing to do, we've allowed a huge buildup of fuel in these woods. So now, when the fires get going, there's a lot more to burn than historically you would've seen in a forest like this," Boatner explains.

"Is it possible that we're gonna get to the point where we have these mega-fires and we just can't fight them because they're too large?" Pelley asks.

"Well, we're there already. We have identified numerous fires this summer that we know we can't put out with the resources we have available. Because of the severity of the burning conditions and the size of the fires," Boatner explains.

The severity of the burning and size of the fires caught the eye of Tom Swetnam, one of the world's leading fire ecologists. He wanted to know what's touched off this annual inferno and whether it's truly a historic change.

At the University of Arizona, Swetnam keeps a remarkable woodpile, comprised of the largest collection of tree rings in the world. His rings go back 9,000 years, and each one of those rings captures one year of climate history.

Swetnam found recent decades have been the hottest in at least 1,000 years. And recently, he and a team of top climate scientists discovered something else: a dramatic increase in fires high in the mountains, where fires were rare.

"As the spring is arriving earlier because of warming conditions, the snow on these high mountain areas is melting and running off. So the logs and the branches and the tree needles all can dry out more quickly and have a longer time period to be dry. And so there's a longer time period and opportunity for fires to start," Swetnam says

"The spring comes earlier, so the fire season is just longer," Pelley remarks.

Swetnam says that climate change -- global warming -- has increased temperatures in the West about one degree and that has caused four times more fires. Swetnam and his colleagues published those findings in the journal "Science," and the world's leading researchers on climate change have endorsed their conclusions.

But what was news to the scientists is something Tom Boatner has noticed for about ten years now. "This kind of low brush would normally be really moist and actually be a fairly good barrier to fire. But as I look at this I just see wilted leaves everywhere. There's no moisture left in them. They're dead," he points out.

Professor Swetnam wanted to show 60 Minutes just how much has changed, so he brought Pelley to the top of Arizona's Mount Lemon. Two megafires there killed everything, even the Ponderosa Pines.

"You know, I was always taught that Ponderosas were big, robust trees that were built to withstand fire," Pelley remarks. "And that when everything else burned off, the Ponderosas were still standing. But look at them."

"The Ponderosas are able to withstand the low severity fires where you get flames of maybe one to two or three feet high. But now the behavior of these fires is off the scale," Swetnam says.

Asked how much things have changed, Swetnam tells Pelley, "Well, we're seeing century-old forests that had never sustained these kinds of fires before, being razed to the ground."

Back at the battle to save Ketchum, Idaho, the day shift was coming off, and the night shift going on.

How long does it take to bring a fire like this under control?

Says Tom Boatner, "This particular fire is about 45,000 acres and they've been working on it for about 11 or 12 days and they've got it about 50 percent contained and with any luck they will finish containing this fire in another five or six days something like that."

Containing it meant fighting fire with fire. Using drip torches, they started a controlled burn around the town, creating a barrier, so that when the forest fire hit there'd be nothing left to burn. These pre-burns are risky though. Trees can torch suddenly and explosively, sending embers up to a mile away.

By daybreak on the 18th day, the gamble had paid off. The blaze came within 100 feet of some homes, but not one home was lost. It will take years for this forest to recover, but Tom Swetnam told Pelley with these new super hot fires some forests may never grow back.

"We used to have forest soil here that might have been this deep," he says, indicating about a foot of depth, "but now we're just down to rock."

"So you're down to mineral and sort of a rock, sort of armored soil. And that is not a good habitat for trees to re-establish," Swetnam says.

"Where do you think all this is headed?" Pelley asks,

"Wait a minute. Did you just say that there's a reasonable chance we could lose half of the forests in the West?" Pelley asks.

"Yes, within some decades to a century, as warming continues, and we continue to get large scale fires," Swetnam replies.

Swetnam says that this is what we have to look forward to. He estimates, in the Southwest alone, nearly two million acres of forest are gone and won't come back for centuries. The hotshots are already planning for the next fire season. In 2006, the feds spent $2 billion on fire fighting, seven times more than just ten years ago.

"You know, there are a lot of people who don't believe in climate change," Pelley remarks.

"You won't find them on the fire line in the American West anymore," Tom Boatner says. "'Cause we've had climate change beat into us over the last ten or fifteen years. We know what we're seeing, and we're dealing with a period of climate, in terms of temperature and humidity and drought that's different than anything people have seen in our lifetimes."