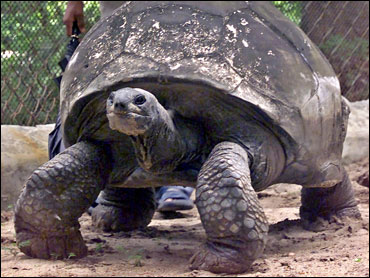 A giant tortoise thought to be one of the world's oldest creatures has died in a Calcutta zoo, ending a life that spanned much of modern Indian history.

Local lore said Addwaita, the Aldabra tortoise whose name means "the one and only" in the local Bengali language, was some 250 years old.

That, however, would have made him much older than the world's oldest documented living animal: Harriet, a 176-year-old Galapagos tortoise who lives at the Australia Zoo north of Brisbane, according to the zoo's Web site. She was taken from the island of Isla Santa Cruz by Charles Darwin in the 19th century.

"According to records in the zoo, the age of the giant tortoise, Addwaita, who died on Wednesday, would be 250 years approximately," said zoo director Subir Chowdhury.

The zoo wants to carbon date his shell to determine exactly how old he was.

Addwaita arrived in the zoo in 1875. Zoo officials say he was one of four tortoises brought to India by British sailors from the Seychelle islands as a gift for Lord Robert Clive of the East India Company. Clive was instrumental in establishing British colonial rule in India, before he returned to England in 1767.

While the other three tortoises died, Addwaita reportedly thrived, living in Clive's garden before being moved to the zoo.

Aldabra tortoises come from the Aldabra atoll in the Seychelle islands in the Indian Ocean, and often live to more than 100 years of age. Males can weigh up to 550 pounds.

According to local Forest Minister Jogesh Burman, Addwaita, the zoo's biggest attraction, had been unwell for the last few days.

"We were keeping a watch on him. When the zoo keepers went to his enclosure on Wednesday they found him dead," Burman said.

Addwaita was cremated, he said.

How you react to this photo reveals your politics

The sun won't rise until next year for this Alaskan city
Thanks for reading CBS NEWS.
Create your free account or log in
for more features.
View CBS News In
CBS News App Open
Chrome Safari Continue
Be the first to know
Get browser notifications for breaking news, live events, and exclusive reporting.