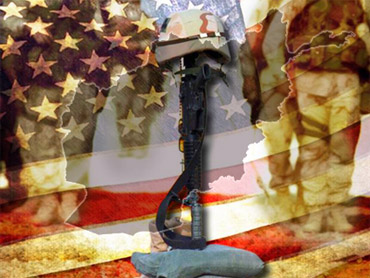 Two U.S. troops and at least 11 civilians died in violence across southern Afghanistan on Friday, including one attack in which a suicide bomber wearing a burqa blew himself up in a bazaar.

Violence has spiked recently in Afghanistan's volatile south as Taliban insurgents step up attacks ahead of a planned major operation by NATO forces to secure the main city of Kandahar, the birthplace of the Taliban.

NATO said the two American service members died in an explosion in southern Afghanistan on Friday but did not disclose details or the location because relatives had not yet been notified. At least 33 troops serving with the international coalition have been killed so far this month, 23 of them American.

In Kandahar province on Friday, nine civilians, including four women and three children, were killed and eight other people were wounded when their vehicle hit a roadside bomb in Maiwand district, Zalmai Ayoubi, a spokesman for the provincial governor said. The driver hit the mine when he veered off the road to go around a section that was damaged.

In neighboring Zabul province, a suicide bomber dressed in a burqa detonated his cache of explosives in a shopping area in Shahjoy district, killing two civilians and wounding at least 16 others, said Mohammad Jan Rasoolyar, a spokesman for the provincial governor.

Also on Friday, the Taliban claimed responsibility for a rocket attack on Bagram Air Field north of Kabul. NATO confirmed that a rocket landed in a field inside the base but did not cause any injuries or damage. NATO said a second rocket landed outside the base.

On Thursday in Ghazni province, also in the south, three Afghan policemen were killed when their vehicle hit a mine in the Qarabagh district, the Ministry of Interior said Friday. Also on Thursday, a private security company employee was killed in a mine explosion in the Ali Shir district of Khost province in eastern Afghanistan, the ministry said.

British Prime Minister David Cameron's planned visit to a front-line base in Helmand province next to Kandahar was canceled on Thursday after cell phone calls referring to a possible rocket attack on a helicopter were intercepted, the British domestic news agency Press Association reported. Cameron, on his first visit to Afghanistan since coming to power last month, spoke with British troops at his country's main base in Helmand on Friday.