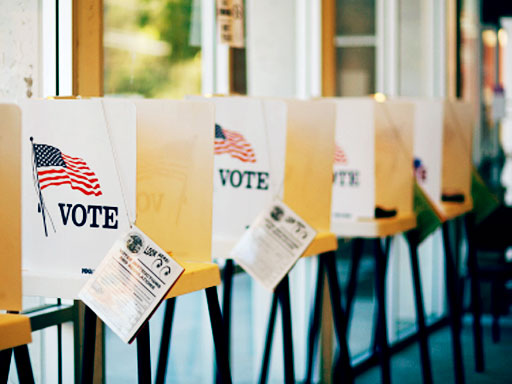 Will the 2012 elections reflect the will of the American people?

That question seems increasingly relevant today in the wake of a new report suggesting many Americans will have a harder time casting ballots next year - and a finding last week that voting machines can be hacked with "just $10.50 in parts and an 8th grade science education."

The report, from the liberal think tank the Brennan Center for Justice at New York University, found that new laws put in place this year could "make it significantly harder for more than five million eligible voters to cast ballots in 2012."

The study points to GOP-driven voting reform efforts that Republicans say prevent fraud - but which some Democrats suggest are specifically designed to disenfranchise the young, minority and low-income voters who largely vote with their party.

"Some states require voters to show government-issued photo identification, often of a type that as many as one in ten voters do not have," reads the Brennan Center for Justice report. "Other states have cut back on early voting, a hugely popular innovation used by millions of Americans. Two states reversed earlier reforms and once again disenfranchised millions who have past criminal convictions but who are now taxpaying members of the community. Still others made it much more difficult for citizens to register to vote, a prerequisite for voting."

The most significant change, the report suggests, is the fact that new laws will be in effect in five states - Kansas, South Carolina, Tennessee, Texas and Wisconsin -requiring photo identification at the polls, something the Brennan Center suggests could make it harder for 3.2 million Americans to vote.

Republicans say it is ridiculous that Americans must routinely show photo identification in their daily life but have not been required to do so when casting ballots. Democrats say that more than 21 million Americans don't have such identification and that Republicans are seeking to disenfranchise them while claiming concerns about voter fraud, which Democrats say is a relatively minor concern. At least 34 states have introduced voter identification laws this year, according to the Brennan Center.

Among the other new laws are measures eliminating early voting on Sundays in Ohio and (on the Sunday before Election Day) in Florida, when some African-American churches organize voters to go to the polls. A ban on election-day voter registration was instituted in Maine, which will likely reduce the number of new, largely-young voters casting ballots.

The new laws, many of which were passed as a result of Republican takeovers of statehouses around the country in 2010, fall under the jurisdiction of the Justice Department, which could potentially argue that they violate the Voting Rights Act. As the New York Times points out, the Supreme Court upheld a voter identification law in Georgia in 2008, "saying that while it found no evidence of the fraud the law was intended to combat, it also found no evidence that the new requirements were a burden on voters."

Meanwhile, for those who do cast ballots, new questions are being raised about whether they will be recorded accurately. Last week Salon.com reported that experts at the Vulnerability Assessment Team at Argonne National Laboratory in Illinois found that people can hack Diebold voting machines using a remote control and leave no trace that they changed votes.

The researchers demonstrated that for a total cost of $26, it was possible to hack the machines by inserting a piece of "alien electronics" into the voting machine - without tampering with the microprocessor or software in the machine. (It does require a decent amount of knowledge and access to the machine, however.) They said such a hack was possible "on pretty much every electronic voting machine." You can see a video demonstration below.

"This is a national security issue," Roger Johnston, leader of the assessment team, told Salon. "It should really be handled by the Department of Homeland Security."