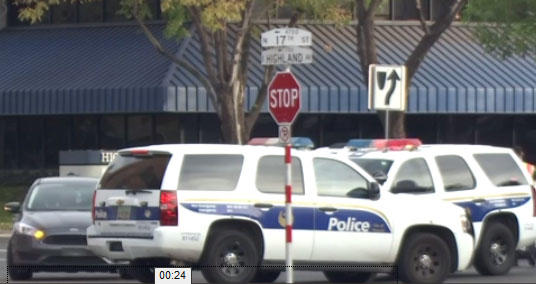 A suspect is in custody after, police say, he shot and killed a woman and their two children before getting into a shootout with police at a central Phoenix apartment complex on Christmas, reports CBS Phoenix affiliate KPHO-TV.

Officers were called to the Highland Apartments at approximately 3:45 p.m.

When they arrived, they found a woman shot to death in the parking lot, according to Sgt. Jonathan Howard.

He said officers tracked the suspect to a specific apartment.

Police cordoned off the apartment complex and kept residents away.

Around 10 p.m., while officers looked inside the apartment from the outside, they spotted a 10-month-old dead, Howard said.

Officers continued to search from the outside for the other child, an 11-year-old, and that's when the suspect started shooting at officers, according to Howard.

They forced their way into the apartment and a shootout ensued.

An officer got hurt but it doesn't appear he was shot, Howard said. He was taken to the hospital in stable condition.

The 11-year-old child was found dead.

The suspect was then taken into custody.

Police said the man and the woman used to be in a relationship.

Several people waited in parked cars across the street for hours until the situation was resolved.

"I can't believe it's Christmas and there's a shooting or whatever's going on. It's eerie. I feel bad for whoever is going through this," said Kristen Alexander.