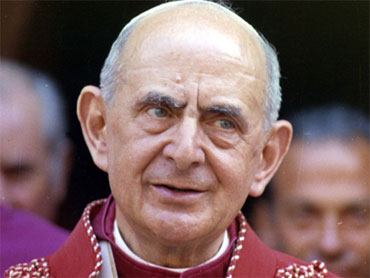 In the Aug. 27, 1963 letter, the head of the New Mexico-based Servants of the Holy Paraclete tells the pope he recommends removing pedophile priests from active ministry and strongly urges defrocking repeat offenders.

The letter, written by the Rev. Gerald M.C. Fitzgerald, appears to have been drafted at the request of the pope and summarizes Fitzgerald's thoughts on problem priests after his Vatican visit.

A message left with the Paraclete order at one of their two existing facilities in Missouri was not returned. A number for the second facility was disconnected.

Tod Tamberg, spokesman for the Archdiocese of Los Angeles, defended the church and said it was unlikely Paul VI ever saw the letter.

Fitzgerald opens the five-page letter by thanking the pope for an audience the day before and says he is summarizing his thoughts at the pope's request on the "problem of the problem priest" after 20 years working in to treat them.

He tells Paul VI that treatment for priests who have succumbed to "abnormal, homosexual tendencies" should include psychiatric, as well as spiritual, counseling - but goes on to warn about the dangers of leaving those individuals in ministry.

"Personally, I am not sanguine of the return of priests to active duty who have been addicted to abnormal practices, especially sins with the young," Fitzgerald wrote.

"Where there is indication of incorrigibility, because of the tremendous scandal given, I would most earnestly recommend total laicization," he wrote. "I say 'total' ... because when these men are taken before civil authority, the non-Catholic world definitely blames the discipline of celibacy for the perversion of these men."

The letter proves that Vatican officials knew about clergy abuse decades ago and should have done more to protect children, said Tony DeMarco, an attorney for clergy abuse victims in Los Angeles.

The church has come under fire for transferring priests accused of sexual abuse to other parishes, rather than reporting the abuse to civil authorities and removing them from ministry.

"He says the solution is to take them out of the priesthood period, not shuffle them around, not pass them from diocese to diocese."

The letter was released in Los Angeles by attorneys who represented more than 500 victims of clergy abuse in their record-breaking $660 million settlement with the Archdiocese of Los Angeles in 2008.

It's among thousands of pages of clergy abuse documents that are to be released as a condition of the settlement after review and approval by a judge overseeing the process.

The letter released Wednesday is different from a 1957 letter made public last year in which Fitzgerald seeks help from the Bishop of Manchester, N.H. in finding a placement for a priest leaving the treatment program.

Attorneys also released a 250-page, redacted transcript of the 2007 deposition of the Rev. Joseph McNamara, who took over the Paraclete after Fitzgerald.

Meanwhile, Wednesday in St. Peter's Square, Pope Benedict gamely carried on with his regular general audience without directly addressing the scandal that has unsettled his papacy.

"May priests everywhere be conformed ever more closely to Christ as heralds of his message of hope, reconciliation and peace," the pope said.

Some in the crowd were not cheering.

"I must really confess that I am disappointed from the Catholic Church," said a woman in the crowd.

Just four days before Easter, defenders of the pope here and abroad are mounting a counter-offensive against the accusers.

The Vatican's top doctrinal official, Cardinal William Levada, specifically called out the New York Times for coverage he called "deficient by any reasonable standards of fairness." The pope, he said, is owed a debt of gratitude for introducing needed reforms.

In Wisconsin, where the late Father Lawrence Murphy may have abused some 200 deaf children over 24 years, the pope's allies insisted there was no evidence he knew about it as the church's top disciplinarian back in the1990s, and chose not to act. Archbishop Jerome Listecki of Milwaukee said Tuesday night that mistakes were made, but not by the Vatican.

"The mistakes were made here in the archdiocese of Milwaukee, in the '70s, in the '80s, and the '90s by the church, by civil authorities, by church officials and by bishops," Listecki said.

But the church, he said, has changed.

"We hope and pray our actions have become a model for what to do after decades of what not to do," he said.