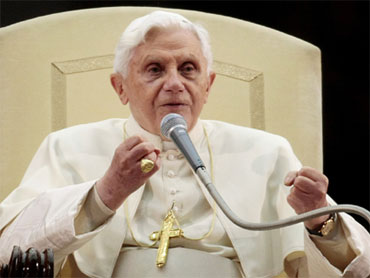 After days of reading only bad news about the Catholic Church's child abuse scandal and Pope Benedict's alleged implication in it, they finally found something to like in the papers at the Vatican.

The Church's own newspaper unsurprisingly leapt to the pope's defense, calling any suggestion the pope helped cover up the scandal a "clear and ignoble intent of trying to strike Benedict and his closest collaborators at any cost."

The pope's defenders protest that the drip-drip of abuse revelations in the Church amount to a smear campaign against him.

"This is simply an attempt to throw mud at the pope," said Father John Wauck, with Opus Dei.

And so the Vatican - like a chess player under attack - is mounting a defense, reports CBS News correspondent Mark Phillips. It has formed a protective wall around the pope and accused his accusers, arguing that Pope Benedict has done more than anyone else to fight abuse in the Church.

"He is a 78-year-old conservative German and he thinks the problem is that the rules weren't followed," said Andrew Brown, a religious affairs writer. "If we followed the rules, this wouldn't have happened."

But more and more the questions are being asked: What did the pope know, when did he know it and what did he do about it?

The latest revelation concerns his time as archbishop in Munich in the '80s when a child-abusing priest was reassigned to a job where he had access to children. Previously the Church said the then-Cardinal Ratzinger was not directly involved in the case, but now it is claimed he was copied on a crucial memo and chaired a meeting about it.

The deeper this scandal gets, the more the pope becomes implicated, the more the institutions of the Catholic Church have rallied to his defense. But many Catholics - and not just the victims - have begun to demand more than expressions of apology and remorse. They're demanding answers.

"If he can even admit that someone who gets to the papal throne has had trouble dealing with this, has had to find his way, and maybe even made mistakes, my goodness, it would just break open a whole new way of looking at the church, this crisis and the papacy," said Tom Roberts, the editor of National Catholic Reporter.

Some have even suggested this crisis could undermine this papacy. But popes aren't forced from office and they don't resign. There's a saying in the Church - only God can fire a pope.

"People who are expecting the pope to line up for a job at McDonald's next week might as well themselves not withdraw their applications for those jobs," Brown said.

Once, as the Vatican's chief doctrine enforcer, he was called "God's Rotweiller." But now it is Pope Benedict who feeling the bite.