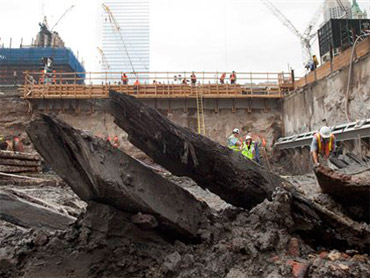 ALBANY, N.Y. -- The remnants of a late 18th-century sailing ship unearthed five years ago at the World Trade Center site in Lower Manhattan are getting a permanent berth in upstate New York.

The New York Times reports the 32-foot section of the wooden vessel found in July 2010 will be transferred to the New York State Museum in downtown Albany. Museum officials say the details have yet to be worked out.

The remains of the Dutch-designed sloop were found buried about 20 feet under a street by a construction crew building a parking garage for the new World Trade Center tower. Historians believe the ship was sunk to the bottom of the Hudson River as landfill.

The ship was dismantled and is being preserved in a laboratory at Texas A&M University in College Station.

WCBS in New York reported that the ship wasn't the first significant archeological find in lower Manhattan. In 2010, work on a new South Ferry subway station yielded a mortared stone wall, believed to be part of the city's early fortifications - dating back to the late 17th century. And in 1991, workers excavating land for the Federal Building just north of City Hall unearthed an African Burial Ground.