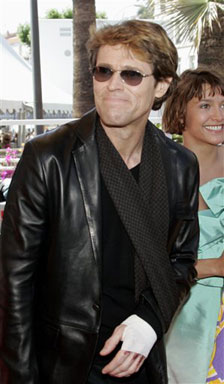 As Texas' most emotional and volatile player, Gabe Muoneke forced himself to stay calm the win was more important.

Muoneke scored 16 points, most of them coming on five thunderous dunks, and Ivan Wagner added a career-high 19 points in the two seniors' final home game as No. 16 Texas kept alive its slim hopes for the Big 12 title with a 68-54 win over No. 23 Kansas on Monday night.

Getting his first start on Senior Night since Feb. 5, Muoneke tried hard to keep the team goals first.

"I tried not to think about it and get emotional because it was a big game," Muoneke said.

It was Texas' first win over Kansas since 1938. The Longhorns are 2-7 overall against Kansas and 1-3 since the Big 12 was formed.

The win keeps Texas within a game of first place in the Big 12. The Longhorns (21-7, 12-3) need to win at Kansas State on Saturday and hope for unlikely losses by conference-leader Iowa State to Texas Tech and Baylor, who are a combined 6-22 in the conference. Texas is the defending regular season champion.

"I think we need a lot of help," Wagner said. "But if we get that help in the last two games, we'd be more grateful than anyone could know."

Texas jumped out to a 14-2 lead on 3-pointers by Wagner and William Clay. Chris Owens then scored six straight points, including a layup when he slapped the ball away at midcourt and spun around two Jayhawks near the basket to bring the crowd of 13,561 to its feet.

Texas was equally effective on defense forcing Kansas into missing 13 of its first 16 shots and 11 turnovers in the first 14 minutes.

The Longhorns shot 54 percent in the first half, thanks to six dunks on breakaway and alley-oop baskets. Muoneke had 10 points in the half, six n dunks.

"We wanted to show our killer instinct and attack," Muoneke said.

Kansas' frustration was capsulized on one play when Drew Gooden missed a 3-pointer. Three Jayhawks players converged on the long rebound only to knock it to Clay. Clay beat the defense downcourt for a dunk and a 28-10 lead. The Longhorns led 38-21 at halftime.

"I'd like to put that first half in a bottle and keep it for a while," Texas coach Rick Barnes said.

Kansas finally showed signs of life in the second. The Jayhawks scored the first two baskets after halftime and Texas missed its first five shots.

Kansas cut the lead to 42-30 on five straight points by Eric Chenowith and finally cut it to 46-36 on a steal and layup by Hinrich with 11:58 left.

Texas coach Rick Barnes called a timeout and the Longhorns came back with a 3-pointer from Wagner and yet another breakaway dunk by Muoneke to push the lead to 55-38.

"We stuck our head out of the hole, but couldn't get all the way out," Gooden said.

Kansas twice more cut the lead to 10, the last at 59-49 with 3:09 left, but hit just three field goals over the final seven minutes and couldn't make a final push.

The Jayhawks (21-8, 10-5) finished with seven assists against 17 turnovers and shot just 31 percent. Hinrich was the only Jayhawks player in double figures with 11 points.

Wagner made up for four turnovers with five assists and hit seven free throws over the final 3:31 to help Texas preserve its lead.

Longhorns junior Chris Mihm, considered the best pure center in college basketball, had a relatively quiet game with nine points in what may be his last game in the Erwin Center.

Mihm was 4-of-8 from the floor and grabbed 12 rebounds as the crowd chanted, "One more year!" Mihm has not said if he will turn pro after the season.

"I'm not even going to talk about that right now," Mihm said. "That was great. No matter what happens with my decision, it was nice."

Texas is 5-5 against ranked teams this season.