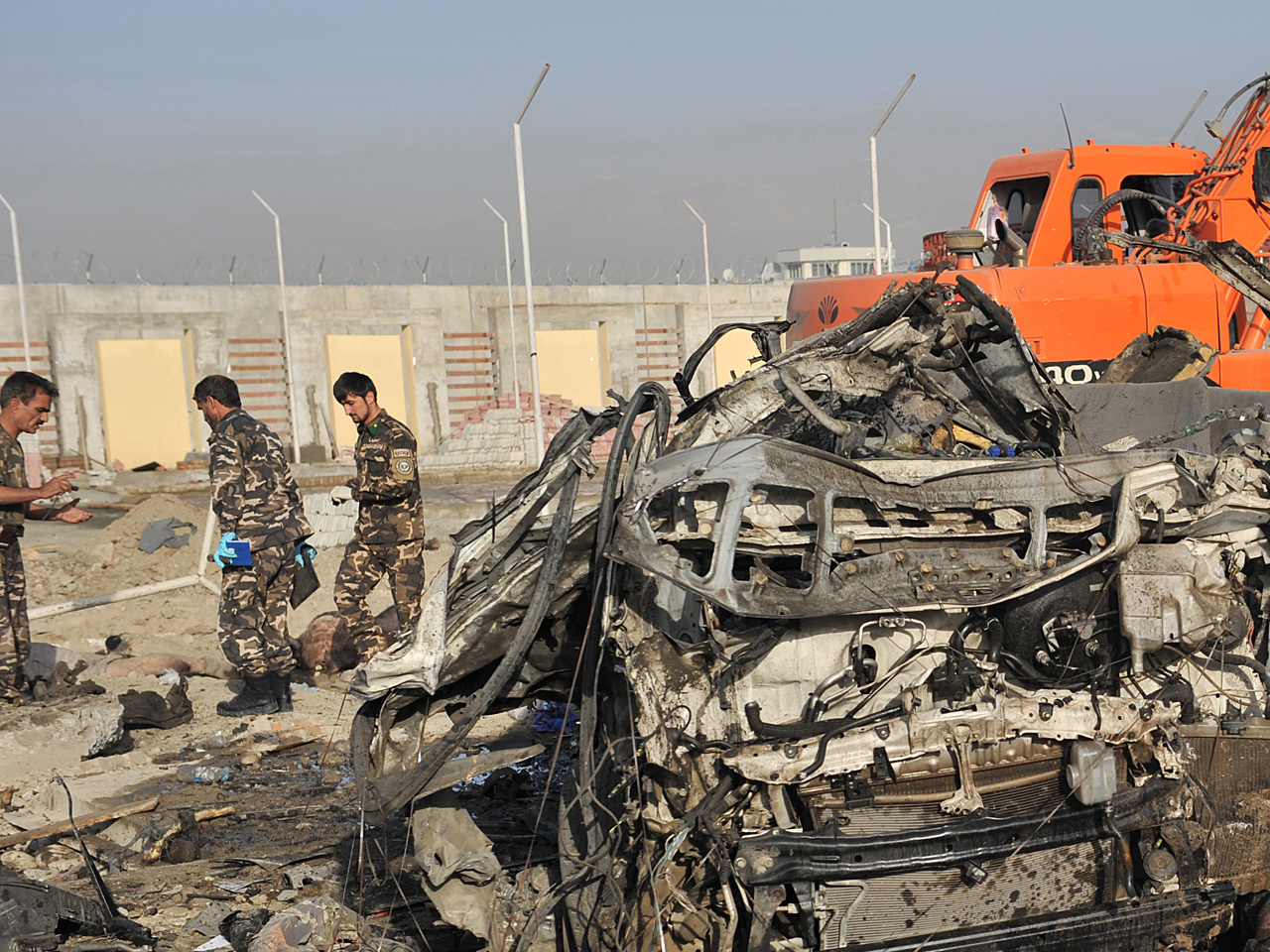 A senior Afghan security official tells CBS News that the bomber walked into a group of American soldiers and local residents who had gathered for a ceremony launching work on a new bridge. He said the ISAF troops wounded were Americans, and an Afghan civilian was also killed in the blast.

Earlier Tuesday, a suicide bomber rammed a car packed with explosives into a mini-bus carrying foreign aviation workers to the airport in the Afghan capital, killing at least 13 people in an attack that a militant group said was revenge for an anti-Islam film that ridicules the Prophet Muhammad.

A senior Kabul police official tells CBS News the dead include eight South Africans, four Afghan nationals and one person from Kyrgyzstan. Many of the victims were employees of an aviation company, including pilots. Two sources have told CBS News separately that the victims of the attack worked for a company contracted to fly U.S. State Department staff within Afghanistan.

Haroon Zarghoon, a spokesman for the Islamist militant group Hizb-i-Islami, claimed responsibility for the dawn attack on the minibus in a telephone call to The Associated Press. He said it was carried out by a 22-year-old woman named Fatima. Suicide bombings carried out by women are extremely rare in Afghanistan — and few if any women drive cars.

Zarghoon threatened more attacks against foreigners working for NATO and said the group had been seeking targets since a video clip of the film was posted on the Internet last week.

There was no immediate claim of responsibility for the suicide attack later in Kunar province, but CBS News terrorism consultant says Hizb-i-Islami is the most powerful insurgent group operating in that region of Afghanistan.

The bombings were a worrisome escalation of violence in the capital, where most attacks are usually blamed on the Haqqani network — a Pakistan-based militant group affiliated with the Taliban and al Qaeda.

Taliban spokesman Zabiullah Mujahid said they had nothing to do with the attack.

Zarghoon, the Hizb-i-Islami spokesman, said his group "will target all foreign troops and those civilians who have come to Afghanistan to help them."

"Foreign troops are fighting against Afghans and foreign civilians are tasked to spy for them. They all are our enemy and will be our target," Zarghoon told The AP, speaking from an unknown location.

Tuesday's suicide bombing came a day after hundreds of Afghans burned cars and threw rocks at a U.S. military base (video) in the capital in a demonstration against the anti-Islam film. One police vehicle was burned by the mob before they finally dispersed around midday Monday.

There were more sporadic protests around the capital Tuesday morning, but none of them turned excessively violent.

Kabul police chief Gen. Mohammad Ayub Salangi said Tuesday's explosion took place near an avenue northwest of the city center near Kabul International Airport. The blast, which went off in front a gas station, was so powerful it hurled the mini-bus at least 50 yards.

An eyewitness at the scene said he was waiting at a bus stop along the road when he saw a small white sedan ram into the mini-bus.

"The explosion was so powerful and loud that I could not hear anything for 10 minutes," said Abdullah Shah, a teacher. "It was early and there wasn't much traffic or there would have been many more casualties.

Hizb-i-Islami is headed by 65-year-old former warlord Gubuddin Hekmatyar — a former Afghan prime minister and one-time U.S. ally who is now listed as a terrorist by Washington. The group is a radical Islamist militia with thousands of fighters and followers across the country's north and east.

The group has recently been seeking to participate in a so-far fruitless peace and reconciliation effort led by Afghan President Hamid Karzai. Its more moderate parts are thought to have close ties to the Karzai administration and as part of its efforts, the group offered a peace plan that called for a broad-based government.

The Taliban have also threatened to increase their attacks against foreign targets to avenge the controversial film. Taliban fighters last week attacked a large British base in southern Afghanistan, killed two U.S. Marines and destroyed six fighter jets. NATO forces killed 14 insurgents and captured another who participated in the attack.

"The anti-Islam film hurt our religious sentiments and we cannot tolerate it," Zarghoon said. He said the 22-year-old Fatima volunteered to be the suicide bomber.

"There had been several young men who wanted to take revenge but Fatima also volunteered and we wanted to give a chance to a girl for the attack to tell the world we cannot ignore any anti-Islam attack," he said.

Zarghoon said recent events such as the mistaken bombing by NATO that killed eight women and girls who had gone out before dawn to gather firewood in the remote eastern Laghman province, a traditional Hizb-i-Islami stronghold, has soured the organization's desire for reconciliation talks.

"Americans have not taken any serious steps for peace," he said. "They killed civilians in Laghman two days ago who had gone to cut wood. When the Americans show they are serious in talks and a solution, we will talk peace then."

The U.S.-led coalition acknowledged that civilians had been killed and expressed its regret over the air strike. It insisted known insurgents had been the target.