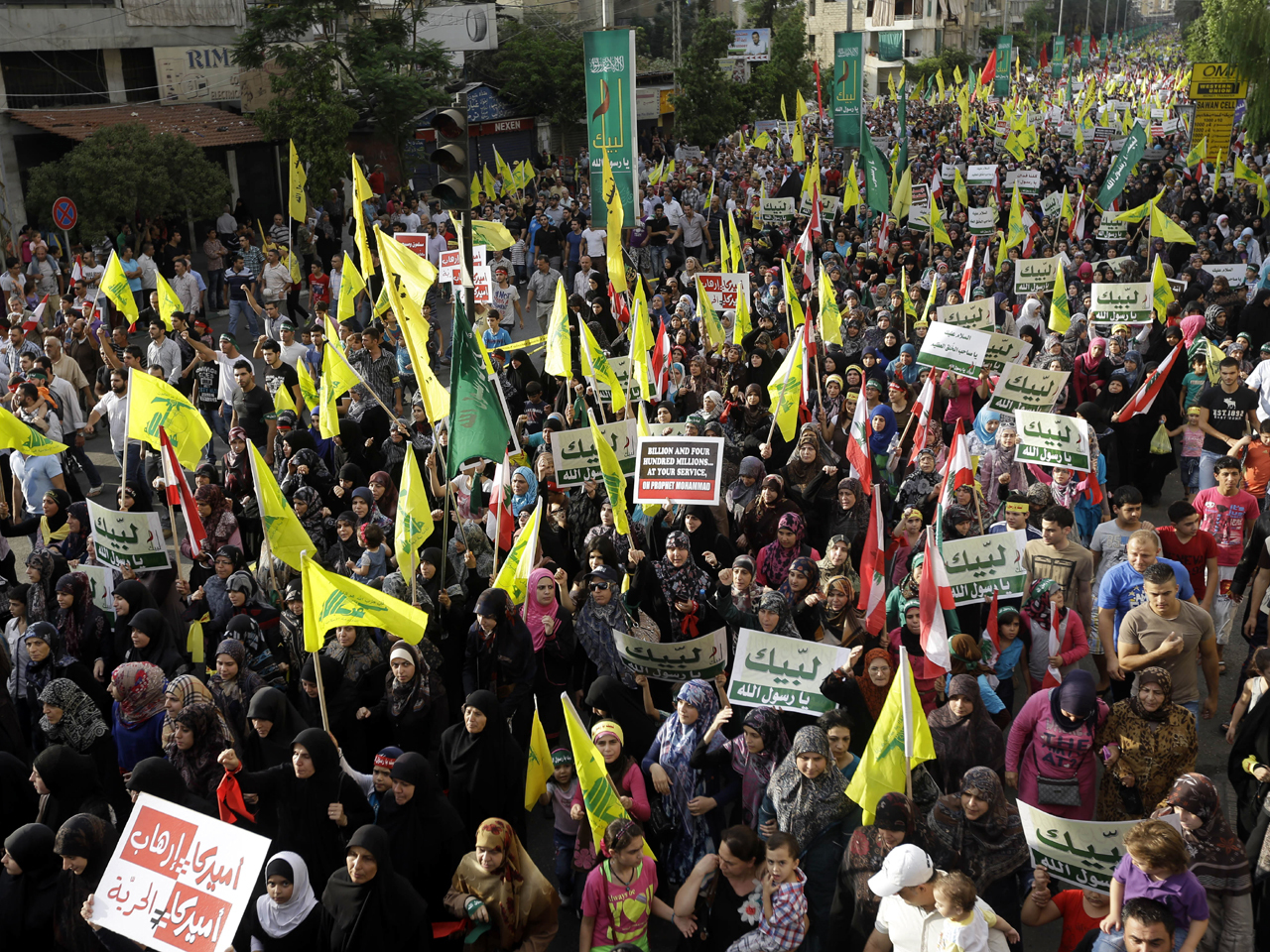 (CBS/AP) WASHINGTON - Diplomats at the U.S. Embassy in Beirut have started to destroy classified material as a security precaution amid anti-American protests in Lebanon and elsewhere in the Middle East and North Africa.

The leader of the Shiite militant group Hezbollah called for sustained protests in a rare public appearance at a rally in Beirut. Already Monday, rioting demonstrators battled with police outside a U.S. military base in Afghanistan and the U.S. Embassy in Indonesia as violent protests over an anti-Islam film spread to Asia after a week of unrest in Muslim countries worldwide.

A State Department status report obtained Monday by The Associated Press said the Beirut embassy had "reviewed its emergency procedures and is beginning to destroy classified holdings." It also said that local Lebanese employees were sent home early due to protests by the militant Shiite group Hezbollah over an anti-Muslim film produced in the U.S.

The turmoil surrounding the low-budget movie that denigrates the Prophet Muhammad shows no sign of ebbing nearly a week after protesters first swarmed the walls of the U.S. Embassy in Cairo and killed the U.S. ambassador to Libya in the eastern city of Benghazi. At least 10 protesters have died in the riots, and the targeting of American missions has forced Washington to ramp up security in several countries.

In Washington, a State Department official said there was no imminent threat to the heavily fortified Beirut embassy, which is about an hour away from where the nearest demonstration is planned.

The official, who spoke on condition of anonymity because he was not authorized to discuss security procedures, said the decision to "reduce classified holdings" was routine and made by embassy staff.

After Tuesday's incidents, the State Department ordered all U.S. embassies and consulates around the world to review their security postures. As a result, a number of missions decided to destroy classified material, the official said. It was not immediately clear which other missions besides the one in Beirut had taken that step.

The official stressed it was normal under circumstances such as those of last week for embassies to reduce the amount of classified material that they hold. Classified documents are also routinely culled as part of normal embassy operations.

Earlier Monday, the State Department renewed its warning to U.S. citizens to "avoid all travel to Lebanon because of current safety and security concerns." It said U.S. citizens "living and working in Lebanon should understand that they accept risks in remaining and should carefully consider those risks."

The new alert, which superseded a May 8 warning, said the potential for a "spontaneous upsurge in violence remains" in Lebanon and that Lebanese authorities are not able to guarantee protection if violence erupts quickly.

The warning also noted that the Fulbright and the English Language Fellow programs that gave grants to American scholars to live and work in Lebanon during the academic year have been suspended "because of the deteriorating security situation and the increased possibility of attacks against U.S. citizens in Lebanon."

Protests against the movie turned violent for the first time in Afghanistan on Monday as hundreds of people burned cars and threw rocks at a U.S. military base in the capital, Kabul. Many in the crowd shouted "Death to America!" and "Death to those people who have made a film and insulted our prophet." They also spiraled out of control in Indonesia and Pakistan, while several in the Middle East were calm.

Sheikh Hassan Nasrallah, the leader of Lebanon's powerful Hezbollah group, has rarely been seen in public since his Shiite Muslim group battled Israel in a month-long war in 2006, fearing Israeli assassination. Since then, he has communicated with his followers and gives news conference mostly via satellite link.

On Monday, he spoke for about 15 minutes before tens of thousands of cheering supporters, many of them with green and yellow headbands around their foreheads -- the colors of Hezbollah -- and the words "at your service God's prophet" written on them.

Nasrallah, who last appeared in public in December 2011 to mark the Shiite holy day of Ashoura, said the U.S. must ban the movie and have it removed from the Internet and called for his followers to maintain pressure on the world to act.

"This is the start of a serious movement that must continue all over the Muslim world in defense of the prophet of God," he said to roars of support. "As long as there's blood in us, we will not remain silent over insults against our prophet."

He called for a series of demonstrations this week to denounce the video.

Hezbollah's rallies seem aimed at keeping the issue alive by bringing out large crowds. But the group also appeared to be trying to ensure it did not spiral into violence, walking a careful line. Notably, Hezbollah held Monday's protest in its own mainly Shiite stronghold of Dahieh in south Beirut, far from the U.S. Embassy in the mountains north of the capital or other international diplomatic missions.

For the group, anger over the low-budget movie that denigrates the Prophet Muhammad provides a welcome diversion from the crisis in Syria, which has brought heavy criticism on Hezbollah for its support of President Bashar Assad. But stoking riots in Beirut could also bring a backlash in the tensely divided country.

The movie portrays Islam's Prophet Muhammad as a fraud, a womanizer and a child molester. Protesters have directed their anger at the U.S. government, insisting it should do something to stop it, though the film was privately produced. American officials have criticized it for intentionally offending Muslims -- and in one case, acted to prevent it being shown at a Florida church.

A number of Afghan religious leaders urged calm after protests broke out in several parts of Kabul.

"Our responsibility is to show a peaceful reaction, to hold peaceful protests. Do not harm people, their property or public property," said Karimullah Saqib, a cleric in Kabul.

On the main throroughfare through the city, demonstrators burned tires, shipping containers and at least one police vehicle before they were dispersed. Elsewhere in the city, police shot in the air to hold back a crowd of about 800 protesters and prevent them from pushing toward government buildings downtown, said Azizullah, a police officer at the site who, like many Afghans, only goes by one name.

More than 20 police officers were slightly injured, most by rocks, said Gen. Fahim Qaim, the commander of a city quick-reaction police force.

The rallies will continue "until the people who made the film go to trial," said one protester, Wahidullah Hotak, among several dozen people demonstrating in front of a Kabul mosque, demanding President Obama bring those who have insulted the prophet to justice.

Several hundred demonstrators in Pakistan's northwest clashed with police Monday after setting fire to a press club and a government building, said police official Mukhtar Ahmed. The protesters apparently attacked the press club in Khyber Pakhtunkhwa province's Upper Dir district because they were angry their rally wasn't getting more coverage, he said.

Police charged the crowd in the town of Wari, beating protesters back with batons, Ahmad said. The demonstrators then attacked the office of a senior government official and surrounded a local police station, said Ahmad, who locked himself inside with several other officers.

One protester died when police and demonstrators exchanged fire, and several others were wounded, police official Akhtar Hayat said.

Elsewhere in Pakistan, hundreds of protesters clashed with police for a second day in the southern city of Karachi as they tried to reach the U.S. Consulate. Police lobbed tear gas and fired in the air to disperse the protesters, who were from the student wing of the Jamaat-e-Islami party. Police arrested 40 students, but no injuries have been reported, said senior police officer Asif Ejaz Shaikh.

Pakistanis have also held many peaceful protests against the film, including one in the southwest town of Chaman on Monday attended by around 3,000 students and teachers.

In Jakarta, hundreds of Indonesians clashed with police outside the U.S. Embassy, hurling rocks and firebombs and setting tires alight, marking the first violence over the film seen in the world's most populous Muslim country.

At least 10 police were rushed to the hospital after being pelted with rocks and attacked with bamboo sticks, said Jakarta Police Chief Maj. Gen. Untung Rajad. He said four protesters were arrested and one was hospitalized.

Demonstrators burned a picture of Mr. Obama and also tried to ignite a fire truck parked outside the embassy after ripping a water hose off the vehicle and torching it, sending plumes of black smoke billowing into the sky. Police used a bullhorn to appeal for calm and deployed water cannons and tear gas to try to disperse the crowd as the protesters shouted "Allah Akbar," or God is great.

"We will destroy America like this flag!" a protester screamed while burning a U.S. flag. "We will chase away the American ambassador from the country!"

Demonstrations were also held Monday in the Indonesian cities of Medan and Bandung. Over the weekend in the central Java town of Solo, protesters stormed KFC and McDonald's restaurants, forcing customers to leave and management to close the stores.

German authorities are considering whether to ban the public screening of the film, titled "Innocence of Muslims" because it could endanger public security, Chancellor Angela Merkel said Monday. A fringe far-right political party says it plans to show the film in Berlin in November.

Iran's top leader, Ayatollah Ali Khamenei, called on the West to block the film Monday to prove they are not "accomplices" in a "big crime," according to Iranian state TV.

Such an appeal falls into the major cultural divides over the film. U.S. officials say they cannot limit free speech and Google Inc. refuses to do a blanket ban on the YouTube video clip. This leaves individual countries putting up their own blocks.