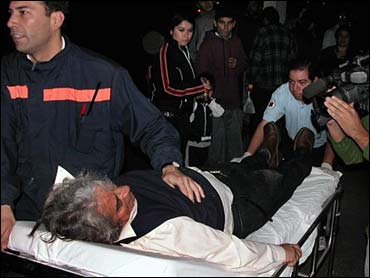 Chile sent cargo planes with medicine and tents to a northern Andean region rocked by an earthquake that killed at least 11 people, including a family of six buried by a landslide.

The magnitude 7.9 quake, the world's third-strongest since the temblor that set off the Asian tsunami in December, struck Monday evening, also rattling cities in Bolivia and Peru. The temblor was centered in a sparsely populated area in northern Chile, about 940 miles north of the capital of Santiago.

The government's Emergency Bureau said Tuesday at least 130 people were injured, and many more required attention for panic attacks. The quake caused power outages and disrupted water supplies to parts of the Andean region, officials said.

Landslides set off by the quake blocked roads, but military cargo planes flew in 15 tons of medicines, tents, mattresses and blankets, the Emergency Bureau said.

At least 11 people were killed, including an 80-year-old disabled man and a 9-month-old baby, the government said.

An entire family of six died in a landslide near the port city of Iquique. Authorities said they had stopped by a road to put flowers where a man had earlier been killed in a traffic accident. Placing flowers at an accident site is a Chilean tradition.

Raul Lanas, who lives in the village of Huara, told Radio Cooperativa of Santiago that nearly 60 percent of the houses there were destroyed or damaged. A nurse in the village said more than 20 people required medical aid.

The quake near Sumatra in Indonesia that spawned the Dec. 26 tsunami measured 9.0. A deadly 8.7 temblor struck the same area March 28.

President Ricardo Lagos cut short a European tour and flew home to deal with the emergency. The tour was to have included visits to Spain and Netherlands. He was in Sweden when told of the quake.