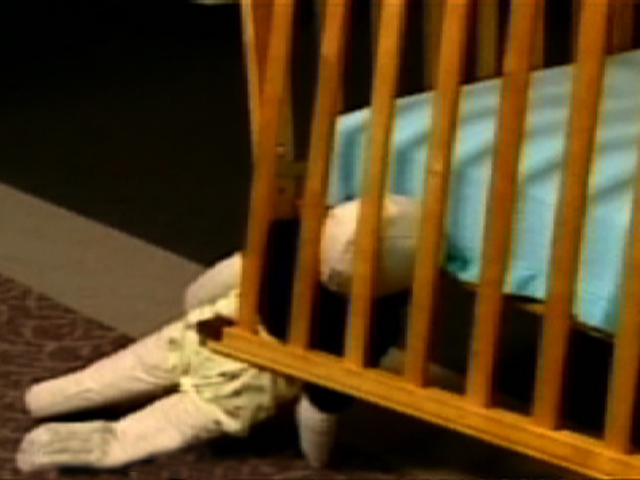 Almost 10,000 infants and toddlers are hurt in crib and playpen accidents each year, according to the first nationwide analysis of emergency room treatment for these injuries.

Most injuries were from falls in toddlers between ages 1 and 2 — generally old enough to attempt climbing out of a crib or playpen.

Researchers who studied 19 years of ER data say better prevention efforts are needed, but that recent safety measures including a ban on drop-side cribs likely will reduce those numbers.

The study found a gradual decrease in the injury rate between 1990 and 2008. But overall, even in the most recent years examined, an average of 26 infants daily were injured in crib-related accidents, said lead author Dr. Gary Smith, director of the Center for Injury Research and Policy at Nationwide Children's Hospital in Columbus, Ohio.

The study was released early Thursday by the American Academy of Pediatrics' medical journal Pediatrics. The release was timed for a U.S. House subcommittee hearing Thursday on consumer product safety issues where cribs are expected to come up, said Dr. O. Marion Burton, the academy's president.

The doctors' group opposes loosening crib regulations and is concerned that the industry may seek to roll back parts of a 2008 law. Burton said the new study, "scientifically validated with peer review," shows why a rollback would be unwise.

It bans the manufacture and sale of traditional drop-side cribs with side rails that move up and down to make it easier to place and remove infants. The movable rails can become partially detached, creating a gap between the mattress and rail where babies can get stuck. Dozens of injuries and deaths including suffocations linked with drop-side cribs led to the ban; millions of such cribs have been recalled.

The study authors analyzed national 1990-2008 data on ER-treated injuries from the product safety commission. They focused on nonfatal injuries related to cribs, playpens and bassinets; information on injuries linked with specific models was not provided.

Overall, 181,654 infants were injured. Most children were not hospitalized. The data also show there were 2,140 deaths, but that doesn't include crib-related deaths in children who didn't receive ER treatment.

The study's Smith said parents can help prevent injuries by lowering the crib's mattress when children grow tall enough to lean over the rails, or, with drop-side cribs, not leaving children unattended when the side is lowered. Children should be moved to toddler beds when they reach 35 inches tall, he said.

But Smith stressed that sturdy cribs are the safest place to sleep for smaller infants and toddlers. They should be placed on their backs, with no padding or pillows.

Juvenile Products Manufacturers Association spokeswoman Amy Chezem said Wednesday that her industry group supports the 2008 law, but that some provisions "are overly burdensome" and need to be reexamined. She added that crib makers adopted a voluntary ban on drop-side models more than a year ago and "would like to see a reasonable enforcement policy" from the safety commission.

The industry group has said that properly assembled drop-side cribs that haven't been recalled can be safely used.