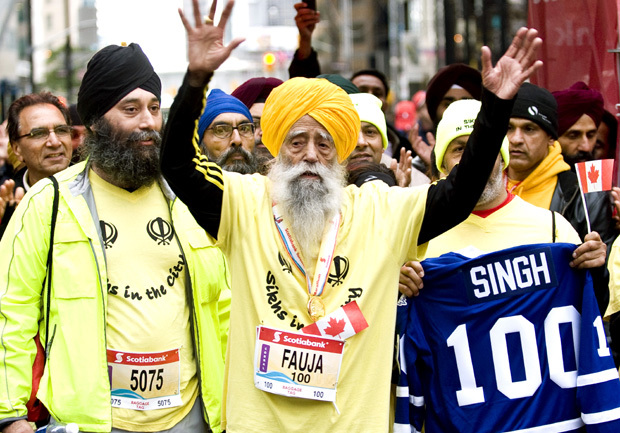 TORONTO - A 100-year-old runner became the oldest person to complete a full-distance marathon when he finished the race in Toronto on Sunday.

Indian-born Fauja Singh earned a spot in the Guinness World Book of Records for his accomplishment.

It took Singh more than eight hours to cross the finish line — more than six hours after Kenya's Kenneth Mungara won the event for the fourth straight year — and he was the last competitor to complete the course.

But his time wasn't nearly as remarkable as the accomplishment.

Event workers dismantled the barricades along the finish line and took down sponsor banners even as Singh made his way up the final few hundred yards of the race.

Family, friends and supporters greeted Singh when he finished the race.

"Beating his original prediction, he's overjoyed," his coach and translator Harmander Singh said. "Earlier, just before we came around the (final) corner, he said, 'Achieving this will be like getting married again.'

Sunday's run was Singh's eighth marathon — he ran his first at age 89 — and wasn't the first time he set a record.

And on Thursday in Toronto, Singh broke world records for runners older than 100 in eight different distances ranging from 100 meters to 5,000 meters.