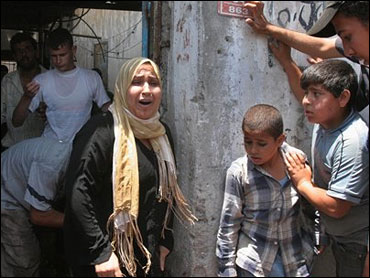 An Israeli air strike targeting a key figure in Palestinian rocket attacks killed 10 people on Tuesday, including the militant and an accomplice, two schoolchildren and three medical workers who rushed to the scene of an initial blast.

The second missile came two minutes after the first, after a crowd had gathered, reports CBS News correspondent Robert Berger. The Israeli army questions how many of those killed were bystanders and how many involved in the rocket attacks.

The deaths of eight civilians in the Gaza City attack was sure to heighten anti-Israel passions already inflamed by a blast Friday in Gaza that killed eight beachgoers. It was also likely to further complicate efforts by the moderate Palestinian president, Mahmoud Abbas, to persuade the balking Hamas government to endorse a proposal implicitly recognizing Israel.

The Israeli army says the most likely cause of the Friday blast that killed a Palestinian family on a Gaza beach was a mine planted by Palestinian militants, and not an Israeli artillery shell, reports Berger. The investigation found that shrapnel taken from two wounded Palestinians who were treated in Israeli hospitals showed that the explosives were not made in Israel. But Israeli officials believe the damage has already been done — and that most of the world believes the cause was an Israeli shell.

The army says van was full of Katushya rockets, more powerful and deadly than the usual homemade Qassams. Also, rockets are now being fired from heavily populated areas; 100 have fallen since Friday.

Palestinian witnesses said the first missile missed the vehicle, which then crashed into a curb and was struck by two other missiles.

"The Zionist enemy insists on shedding Palestinian blood and we insist on going ahead with our holy war and resistance," said Khader Habib, a group leader in Gaza. "God willing, the resistance groups ... will deliver a harsh response. All options are open."

The interior of Wadiya's mangled yellow van was a jumble of twisted metal and shredded upholstery. A white slipper lay in a pool of blood on the ground.

"We will act with all our might and use all our means against any group that acts against us," said Peretz, whose hometown, Sderot, comes under frequent rocket attack.

At midday Tuesday, the Israeli military said more than 100 rockets had been launched at Israel since Friday.

The Palestinian prime minister, Ismail Haniyeh of Hamas, demanded an international commission of inquiry "to investigate the brutal crimes and the bloody Israeli massacres of our people."

A Hamas spokesman, Sami Abu Zuhri, accused the world of indifference to the killing of Palestinian civilians.

"Hamas and all the armed resistance groups have no other choice but to protect our people, and the world must bear the responsibility for the explosive situation that will engulf the whole region," Abu Zuhri said.

Hamas recently resumed open involvement in rocket attacks against Israel, and after the beach explosion, called off a 16-month truce.

At the hospital's morgue, angry women shouted, "Death to Israel, Death to the occupation!" One Islamic Jihad militant went inside the morgue, put his hands on one of the dead bodies, then smeared the blood on his rifle. Angry crowds burned tires near the Mughrabi home.

Dozens of gunmen fired in the air as families began taking bodies from the morgue to the mosque for funeral services.

Abbas accused Israel of trying to "wipe out the Palestinian people."

"Every day there are martyrs, there are wounded people, all of them innocents, all of them bystanders," he said. "They want to eliminate the Palestinian people, but we are going to sit tight. We are sitting tight on our land.

"We want to establish our state and live in peace," he added. "What Israel is committing is state terrorism."