With the holidays on their way, we are seeing many loved ones, whether family or friends, returning home for a few weeks at a time. Our goal is often to keep them entertained and to give them a good time while they are in town. We want them to return more often, and we want to enjoy the time that we have with them. We want to create memories that last. But, what happens when you are out of ideas? Here is a list of five concert events in the South Florida that will keep your conversation going for years to come.

Tickets are ranging from $44 to $280 and will most likely to sell out, as this 26-year old R&B sensation performs in South Florida. As a native to Miami, Jason returns home, performing in Hollywood as part of his most recent tour hits global audiences. Making a special trip to Phoenix and Hollywood in between a worldwide tour, including the United Kingdom and Australia, Jason returns the love to audiences that supported him since day one.

A classic group and Rock and Roll Hall of Famers, Hall and Oates return to South Florida for a full night of magic, as the duo returns to the road, entertaining fans of all ages. According to the Hard Rock Seminole, "Daryl Hall and John Oates have sold more albums than any other duo in music history." With so many number one hits, award-winning achievements and brand new ventures, this event is sure to be packed. For a group as successful as Hall & Oates, it would be foolish to assume this would be nothing less than an amazing show.

Performing at an average of 200 shows a year in some of the largest cities around the United States, Spam Allstars will be returning home to tour the South Florida area in the months of November through January, with 14 dates already confirmed! A mix of electronic improvisation, latin, funk, hip hop and dubstep music, Spam Allstars are an eclectic favorite to many in the world of Latin music within the United States. Because they appeal to many different tastes, audiences are a mix of multiple demographics and age groups. Sharing the stage with Spam Allstars at Hoy Como Ayer, Rumberos De La Ocho will also enchant audiences with an Afro Cuban performance guaranteed to keep you on your feet!

Related:  6 Songs To Motivate You Through The Day 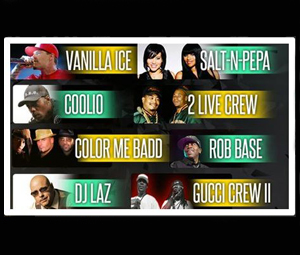 With tickets already on sale, Hip Hop continues into its 41st year of birth with a "Legends of the Old School" tour. A highly anticipated concert event, legendary acts take the stage and perform the hits, all the hits and nothing but the hits. Fans of old school hip hop, booty/bass and R&B music are not going to want to miss out.

"This is Not a Test," TobyMac's newest tour is hitting Miami, with special guests, Britt Nicole and Colton Dixon. Miami is in for a night of gospel hip hop with "one of first and best-known Christian [music] rappers." With a new album, 11 million album sales and six Grammy awards under his belt, TobyMac tours the United States, bringing positivity and grace into the hearts of many.

Jessica N. Abraham-Hogan is the owner of Shorty Produkshins in Orlando, Florida, and specializes in Social Branding and Public Relations for both the Professional Services Industry and Entertainment Business. Over the last 13 years, she has worked with many publications and has created branded content for multiple organizations, Globally.