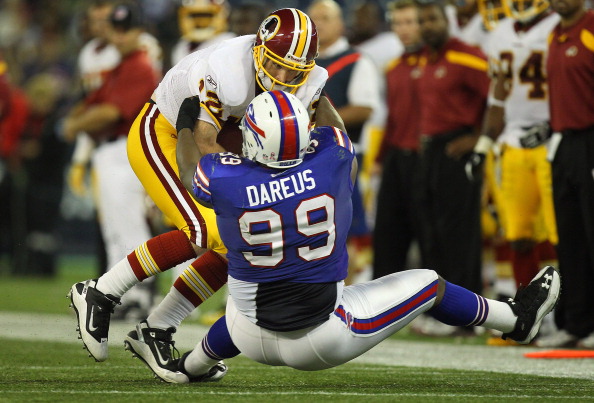 The Buffalo Bills seem to have the worst luck in the history of the league.

They are the only team to have appeared in four consecutive Super Bowl games, which they have all lost, and it has been 18 dreadful years since the Buffalo Bills have finished on top of the AFC East division. It's even more unfortunate that Tom Brady, one of the greatest quarterbacks to ever play the game competes against them twice a year.

Some fans may even consider the franchise cursed or simply overlooked by the football gods.

After finishing the 2010 NFL season 4-12, the Bills allowed 2714 rushing yards––the third most rushing yards allowed by any team through the past 11 seasons. It was clear that the Bills needed to find a gold mine in the draft if they wanted to ascend from the laughing stock of the league.

Luckily for them, the draft class of 2011 was full of gems.

For the months leading up to draft day, the media was buzzing over who the Denver Broncos would select with the second pick. It was widely known that the Carolina Panthers would select quarterback Cam Newton. The Broncos were also searching for a defensive cornerstone and the top choices were linebacker Von Miller from Texas A&M and defensive tackle Marcell Dareus, who was best known for his MVP performance for Alabama in the BCS National Championship. Whoever the Broncos would pass on, the Bills would snatch up.

On April 28, 2011, the Bills selected defensive tackle Marcell Dareus to become the core of the defense.

Buffalo fans created huge hype over the rookie, especially due to the success of 2010 NFL Draftee defensive tackle Ndamukong Suh, who recorded 66 tackles,10 of which were sacks.

With the bar set high, Dareus performed well below standards, recording only 43 tackles, 5.5 of which were sacks. The season brought the entire nation of Buffalo fans down to the reality that they would have to chip away at Dareus, polish him, and surround him with other diamonds that would allow him to truly shine.

He just needed the right defensive scheme and foundation around him.

Pettine is familiar with the division and quarterbacks everywhere are familiar with Pettine. He was the defensive coordinator for the Jets from 2009-2012. During his first season as the Jets defensive coach, his defense ranked first in the league in the least amount of yards and points allowed and eighth in takeaways. Over the past four seasons, he has solidified himself as a brilliant defensive coach. His averaged defensive rankings are fourth in total yards allowed, 12th in points allowed and 10th in takeaways.

It doesn't hurt either that he helped shape cornerback Darrelle Revis into arguably the most talented defensive back in the league.

Pettine is the man who will chisel Dareus into the defender that will force offensive players to specifically plan plays to avoid him. He will make the Bills defense a rugged and gritty front.

In a recent interview with reporter John Murphy from BuffaloBills.com, Pettine said, "I'm not bringing any defense here; this is going to be the Buffalo Bills defense. It's going to be built around the explosive athletes that are here, starting with the front - that's the solid foundation here - moving to the linebackers and the secondary that's stacked behind them."

It is widely believed that Pettine will mainly execute the 3-4 foundation on defense. Dareus will be the nose tackle, responsible for stuffing up the running game and disrupting the protection. Which will allow defensive end Mario Williams to bull rush the offensive line and take down the quarterback.

If Dareus can start competing on a consistent level, he and the revamped Buffalo defense will wreak havoc on the field. Dareus should see his statistics rise in a division full of opportunities to make a statement.

There are a few blemishes that still need to be rubbed out. However, if examined closely, the jewels on the team are just starting to glow. It won't be long before the entire defense dazzles Buffalo fans.

Perhaps the football gods haven't forgotten about the team after all.

Evan Batten is a sports fan and former athlete who knows how to follow a player back to their roots. With a successful sports blog and bylines all over the place, he continues to follow his passion of sports writing. Follow him on Twitter @EBattenSports His work can be found on Examiner.com.