MIAMI (CBSMiami) -- After day one of Ultra was clouded by heavy rains, day two followed a different beat. The crowd enjoyed a cooler and drier weather.

"Since I'm from Chicago, I say this is perfect festival weather.  You can dance.  It's not too hot," said Ultra goer Alyssa Ahern.

Some of the world's most renowned electronic music DJs will be drawing tens of thousands of people from all over the world to the three-day electronic dance music festival held at Bayfront Park.

The event, now in its 17th year, was almost cancelled after a security guard was critically hurt after being trampled when people without tickets rushed the gates.

New security measures in place this year include reinforced fences and a minimum age limit of 18.

Outside the Metro Rail Station, City of Miami Fire Rescue transported an underage boy who somehow cut his leg.

Despite this scene, there have not been as many incidents as in years past.

"The numbers have definitely dropped for the first day compared to last year.  And a lot of that is the new protocols that have been put in place by Ultra and the City of Miami itself," said Miami Fire Captain Ignatius Carroll.

Those new safety protocols also means traffic closures and detours, all of which started the morning of the event. 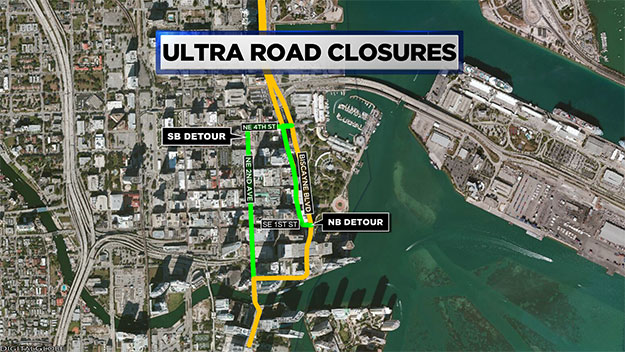 Most of Biscayne Bay Boulevard is now blocked and traffic is being rerouted West at northeast 4th Street to northeast 2nd Avenue.

All northbound traffic along Biscayne Blvd. is being reduced to two lanes and shifted to southbound lanes at southeast 1st street.

The closures and detours will last until Monday at 6 a.m.

Meantime, the Florida Department Of Transportation is warning drivers to expect additional traffic in and around Bayfront Park with as many as 300,000 people expected to attend the event over the weekend.

The department said drivers may encounter increased congestion on parts of I-95, US 1, and the Dolphin Expressway leading up to the event. Parts of Florida's Turnpike, Palmetto Expressway and Don Shula Expressway also may have increased traffic.

For those who opt for public transportation, the Metrorail and Metromover will be running until 1 a.m.

Transit employees will be available at the Government Center Metrorail station to provide help.

Metrorail and most Metrobus routes (except for express routes and circulators) charge $2.25 per trip. The Metromover is free.

Fortunately, or unfortunately--depending on what South Floridians are doing this weekend--there are several other happenings in the area--many of which will only add to the traffic chaos.

Wicked, playing at the Adrienne Arsht Center, has showings all weekend long.

Adding to the downtown Miami congestion, Ariana Grande's concert is set for the AAA Saturday night at 7:30 PM.

On the way to Downtown, from the south, congestion may occur around the Key Biscayne area due to the Miami Open.

On Sunday, the Miami Heat will play the Pistons at the AAA. The game starts at 6 PM.