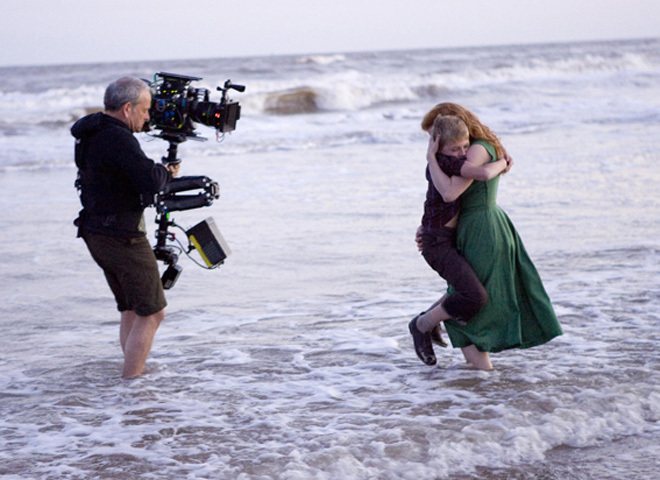 "The Tree of Life," "The Artist," "Hugo," "The Girl With the Dragon Tattoo" and "Tinker, Tailor, Soldier, Spy" were nominated by the American Society of Cinematographers for its award for best feature film cinematography of 2011.

This year's nominated films incorporated a wide array of lighting styles and technologies, from digital cameras and 3-D stereoscopic work, to both color and black and white.

But digital continues to make inroads in the awards process of one of the most tradition-bound guilds. With the creative and technical advances being made in digital photography, only two of the five picks for best cinematography of 2011 were recorded exclusively on actual film.

Click through to view screen grabs and trailers of the nominees' stellar work.

"The Artist" lovingly recreates an era of Hollywood when the production and aesthetics of silent films were on the wane. The film was made in the traditional style of the period - no Steadicams, thank you! - but was actually shot in color and converted to black and white because, according to cinematographer Guillaume Schiffman, available b/w film stocks produced too sharp an image.

With hardly any dialogue, greater emphasis was given upon lighting to affect mood and to advance the storytelling.

"The Girl with the Dragon Tattoo"

Jeff Cronenweth has proven fruit doesn't fall far from the tree: The son of the late master cinematographer Jordan Cronenweth ("Blade Runner"), Jeff has made a name for himself as DP of David Fincher's "Fight Club" and "The Social Network" (the latter earning him an Oscar nomination).

For "The Girl With the Dragon Tattoo," Fincher's adaptation of the Stieg Larsson thriller (previously filmed as a Swedish production), Cronenweth actually stepped in to the production after principal photography had already started, replacing the original DP. He captured the film's chilly Scandinavian landscapes with an RED digital camera, which proved highly adaptable for a story so dark in both lighting and morality. Filming took place in Sweden, Zurich and Norway, with interiors in Los Angeles.

"Dragon Tattoo"'s look was inspired by the films of director Ingmar Bergman and his cameraman, Sven Nykvist (with whom Cronenweth had worked): While the cool, indirect Swedish light penetrates scenes in an icy, tense way, the scenes in the story's darker recesses - including car chases through sleet and rain - underscore the characters' search for clues in a mystery, and the morbid dangers they face.

Director Martin Scorsese's love of cinema is further evoked with recreations of the early fantasy films of Georges Melies.

Richardson previously won the Academy Award for Scorsese's "The Aviator" and for Oliver Stone's "JFK."

The chilliness of a sinister mystery is also palpable in the photography of the new film based on John le Carre's spy thriller, "Tinker, Tailor, Soldier, Spy." Directed by Tomas Alfredsson (whose credits include the Scandinavian vampire thriller "Let the Right One In"), the story tells of the search for a Soviet double agent within Britain's spy agency MI6.

Cinematographer Hoyte van Hoytema shot on film rather than digital, with wider lenses, to capture the textures of locations representing 1970s London. Unlike the celebrated 1970s mini-series, this "Tinker" does not rely on tight close-ups of faces, but on the isolating claustrophobia of an arena in which one spy may actually be a mole.

"The Tree of Life"

More than for most any director working today, cinematography in Terrence Malick's films - from "Badlands" and "Days of Heaven" to "The Thin Red Line" and "The New World" - evokes deeply personal worlds for the characters, while at the same time captures the daunting, sometimes remorseless landscapes of the natural world.

The narrative of "Tree of Life" is both extremely intimate and cosmic in scope, alluding to the creation and evolution of life on Earth, as well as how a family deals with birth and death. As is typical with Malick, the director eschewed strict adherence to script readings from his actors - and had his cameraman focus on more ephemeral aspects of the scene. The resulting film speaks to memory and sensations rather than plot.

That naturalism also lent itself to the colors of the film - very little artificial lighting was used. The film was shot using a mixture of 35mm, 65mm and Imax format film, and a high-speed (1000 fps) digital camera.

Lubezki, who earned an Oscar nomination for Malick's "The New World" (in addition to "A Little Princess," "Sleepy Hollow" and "Children of Men") has received every critics' group award this season for his work on "Tree of Life."

Winners of the 26th annual American Society of Cinematographers Outstanding Achievement Awards will be announced February 12 in Los Angeles.