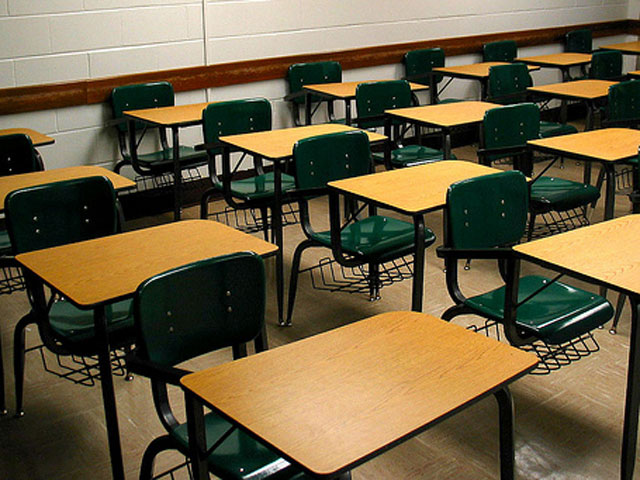 When you were in school, did you ever get in a fight? Or sneak a cigarette in the bathroom? Or speak rudely to a teacher? Many of us did, but nowadays such behavior can get a student hauled off in handcuffs.

In the wake of a string of school shootings in the 1990s, school districts around the country began implementing "zero tolerance" policies surrounding weapons, drugs and soon, more innocuous behavior like tobacco use, swearing, and truancy. With beefed up security and police presence on campus, instead of going to the principal's to receive detention, students are facing law enforcement officers when they misbehave.

And, perhaps not surprisingly, reports in New York, Louisiana and Texas indicate that non-white students are more likely to be referred to the criminal justice system for school-based infractions than their white peers. In 2010, the New York Civil Liberties Union sued the NYPD for wrongful arrests, harassment, and excessive force in the city's public schools.

Have things gone too far? We've collected some of the most absurd student arrests of the past few years. You be the judge.

She dropped a piece of cake at lunch

In September 2007, Pleajhai Mervin, 16, was arrested at her Palmdale, Calif., high school after she allegedly dropped a piece of cake during lunch and failed to pick up to the satisfaction of the officer. Mervin reportedly heard the officer say "hold still nappy-head" to her during the incident, part of which was caught on tape.

Mervin was arrested on charges of battery and littering and suspended for five days. The student who took video of the event was also reportedly arrested.

According to the Los Angeles Times, the guard, whom Mervin had accused of injuring her during the arrest, was cleared of wrongdoing.

He burped in class

A 13-year-old Albuquerque, N.M., student was handcuffed and taken to a detention center for "interfering with public education" after he "burped audibly" in class, according to a lawsuit filed by the boy's parents in December 2011. The suit - which names the boy's teacher, who reportedly called in the school's officer after the burp, the principal, and the school officer who arrested him - claims the boy's civil rights were violated when the school transported him to a juvenile facility without notifying his parents.

The suit also says the boy was denied his due process rights because he was suspended for the rest of that school year without "providing him an explanation of the evidence the school claimed to have against him." He was reportedly not allowed to call witnesses or defend himself against the burping allegation.

They wrote on their desks

In April 2007, 13-year-old Brooklyn student Chelsea Fraser was arrested for writing "okay" on her desk, according to a report by the New York Civil Liberties Union. She was reportedly handcuffed in front of her fellow students and escorted into a police car.

And in February 2010, Alexa Gonzales, 12, was arrested in her Queens, N.Y., junior high after she reportedly doodled the worlds "I love my friends Abby and Faith" in erasable marker on her desk. According to the New York Daily News, Gonzales was handcuffed and walked out of the school by officers. She was then reportedly locked in a room at the local precinct for two hours. Gonzales' mother is suing the city for $1 million.

He smelled the hand sanitizer

A 14-year-old Texas boy was fingerprinted and charged with delinquency for allegedly sniffing his hands after rubbing hand sanitizer on them. According to the Dallas Morning News, on Oct. 19, 2008, the seventh-grader picked up a bottle of hand sanitizer that his teacher kept on her desk, rubbed the gel on his hands and smelled them. The boy was sent to the principal's office, and police became involved after apparently suspecting the boy was trying to get high by sniffing his hands.

But prosecutors dropped the charges three days after filing them. "It's not a crime," Jamie Beck, first assistant district attorney in Denton County told the Dallas Morning News.

They had a food fight

In November 2009, 25 Chicago middle school students between the ages of 11 and 15 were arrested for their involvement in a cafeteria food fight. The students were reportedly rounded up, handcuffed, and taken to jail, where they had their fingerprints and photos taken. Most were charged with reckless conduct, a misdemeanor, according to The New York Times.

In May 2011, 10 high school students from Clayton County, Ga., were also arrested following a food fight, according to the Atlanta Journal-Constitution.

Bonus: He asked a question

You probably remember this guy - he was in college when the incident occurred, but we just couldn't resist adding it to our list: University of Florida student Andrew Meyer, 21, was in the middle of asking Sen. John Kerry a question at a university forum in Sept. 2007, when campus police grabbed him, dragged him out of the auditorium, and Tased him. Before being shocked, he can be heard shouting, "Don't Tase me, bro, don't Tase me."

According to the Gainsville Sun newspaper, two officers were placed on leave following the event, but later cleared of all wrongdoing, and Meyer was charged with disrupting a public event and resisting arrest with violence. He was later cleared of the charges.

According to the Washington Post, Meyer trademarked the phrase "Don't Tase me, bro" and has sold t-shirts with the phrase printed on them from his website. He is also looking for a publisher for a book he has written about the incident.