DETROIT (CBS Detroit/ AP) - The big star of this year's North American International Auto Show will be SUVs and pickup trucks. Press days launched the show Monday and brought a couple of surprising new cars to the show including a few sports cars and electric vehicles. 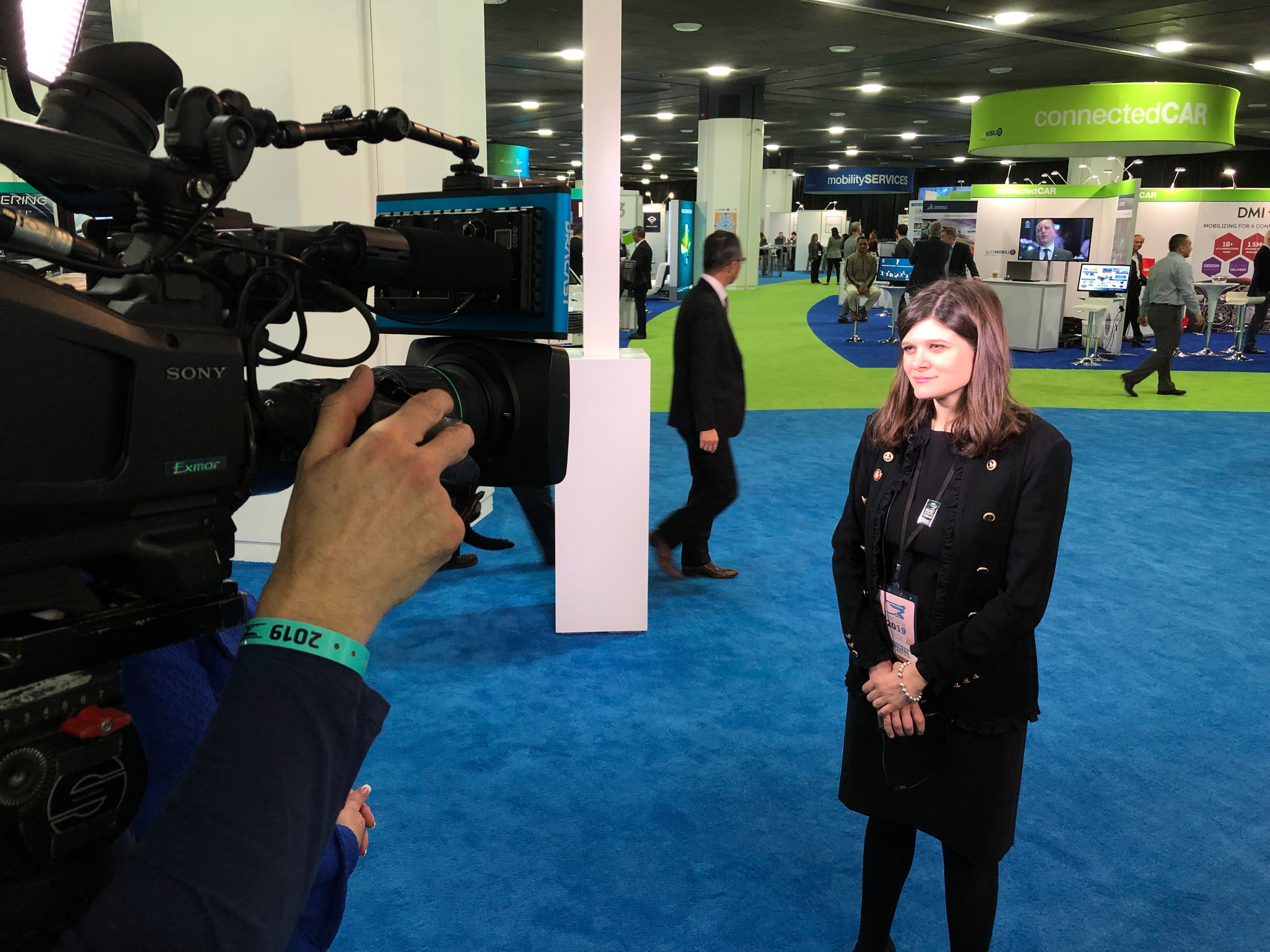 The most popular vehicle of the bunch is the Ford Explorer, revealed ahead of the show Wednesday night at Ford Field, the home of the National Football League's Detroit Lions.

Cadillac will show off its XT6, a smaller-than-a-truck, three-row family hauler at an event Sunday night. Toyota brings back the high-performance Supra on Monday. The sports car developed a cult following when it was on the market from 1978 to 2002. Nissan and its Infiniti luxury brand plan to show two concept electric vehicles on Monday as well.

This year's North American International Auto Show will take place in January for the final time. In 2020, it switches to June to escape the cold weather and show off more products outside, including autonomous vehicles.

Here are the big unveils coming up for the show, which opens to the public from Jan. 19 through 27: 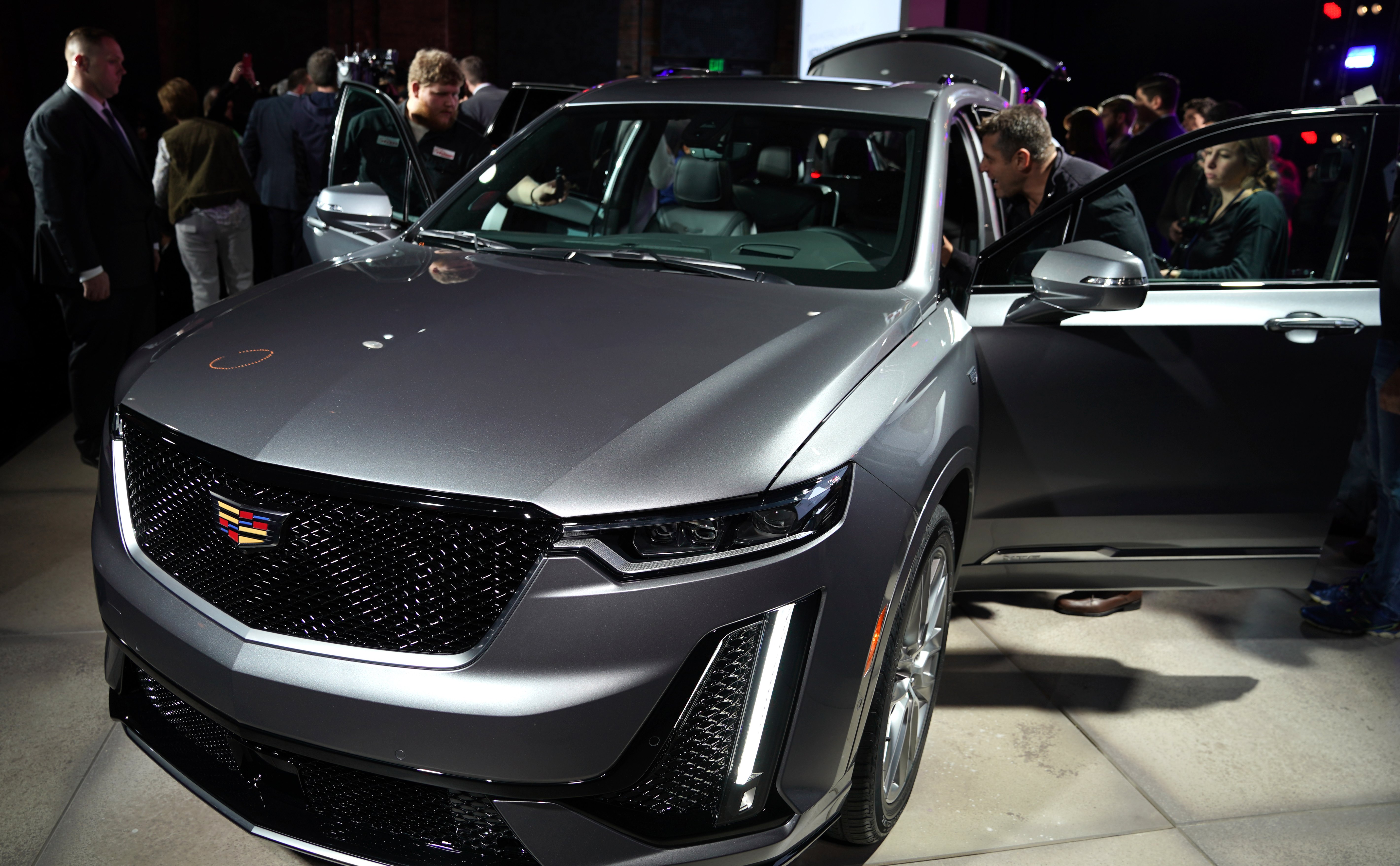 The marketing folks at General Motors' Cadillac brand are hoping the new XT6 big SUV will carve out a niche in the crowded market for utilities with three rows of seats but aren't so huge they're considered trucks. The six- to seven-passenger XT6 has a chiseled Caddy look and unique premium luxury materials to set it apart, but it's going against well-appointed luxury versions of the Chevrolet Traverse, GMC Acadia and Buick Enclave, as well as entries from BMW, Audi, and other automakers. It's also got the same engine as the other brands, a 3.6-liter V6 that puts out 310 horsepower, and a nine-speed automatic transmission. The XT6 has a suite of standard safety features including automatic emergency braking, blind spot detection, and rear cross traffic alert. It goes on sale in the summer as a 2020 model in the U.S. Price and gas mileage wasn't announced. 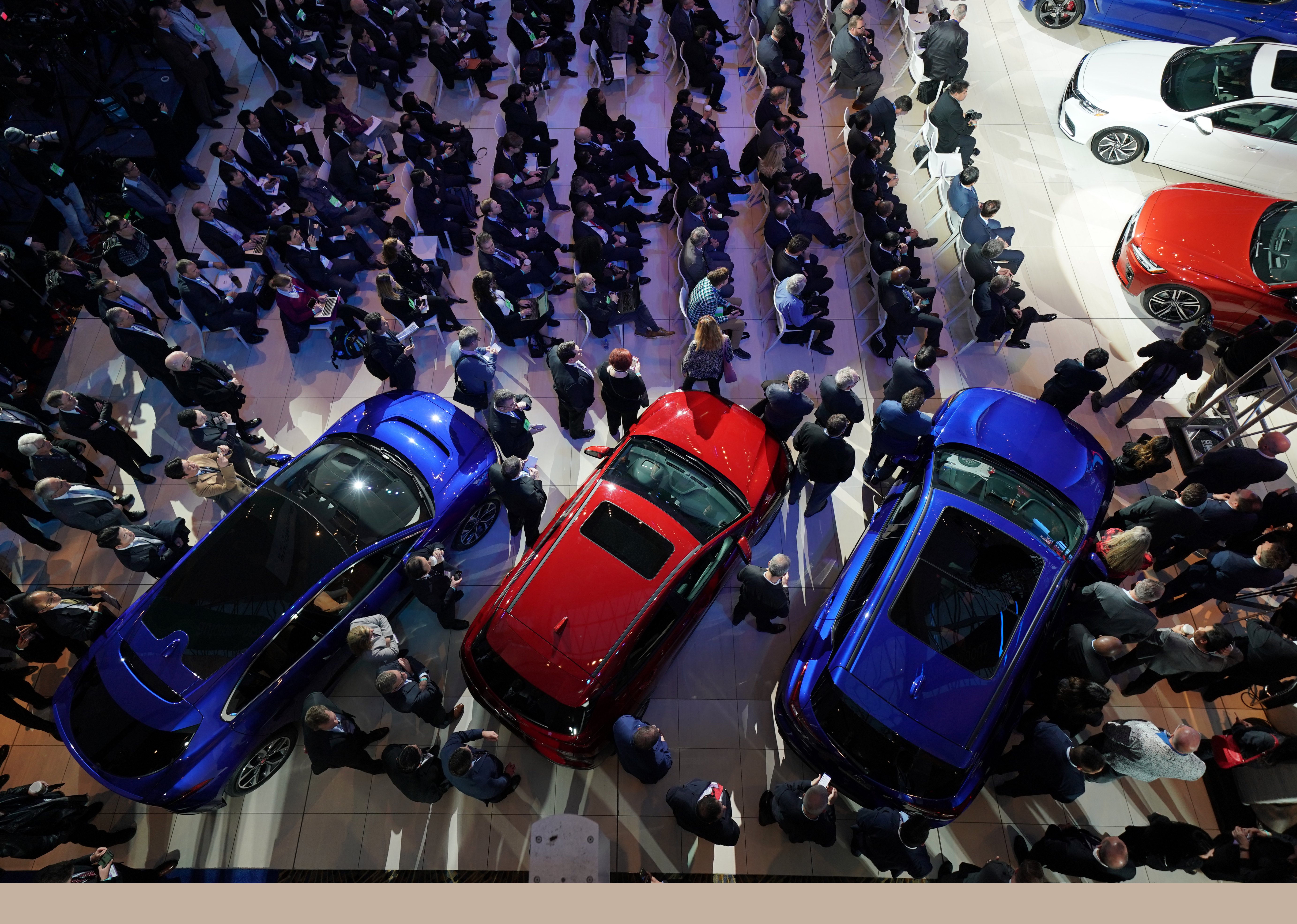 Ford's aging Explorer big SUV is getting a major revamp as it faces growing competition in the market for family haulers with three rows of seats. The company unveiled the new version last week at Ford Field and will display it again at the auto show. The Explorer, last reworked for the 2011 model year, gets a top-to-bottom update that includes a switch from front- to rear-wheel-drive, as well as updated engines and transmissions and some nice standard safety features. The SUV's appearance doesn't change much, but the roofline does slope more from front to back. Ford also added more interior space and second-row seats that tip and slide forward with the touch of a button. The base engine is an updated turbocharged 2.3-liter four-cylinder with 300 horsepower. There's also a 365 horsepower 3-liter turbocharged V6. And for the first time in six years, Ford is offering a gas-electric hybrid SUV with the new Explorer. It has a 318 horsepower, 3.3-liter V6 hybrid system with up to 500 miles of driving range. And there's a high-performance version with a 400-horsepower 3-liter twin turbo V6. The base price will rise $400 from the current $32,365 excluding shipping. Fuel economy wasn't announced. The Chicago-built Explorer goes on sale in the summer. 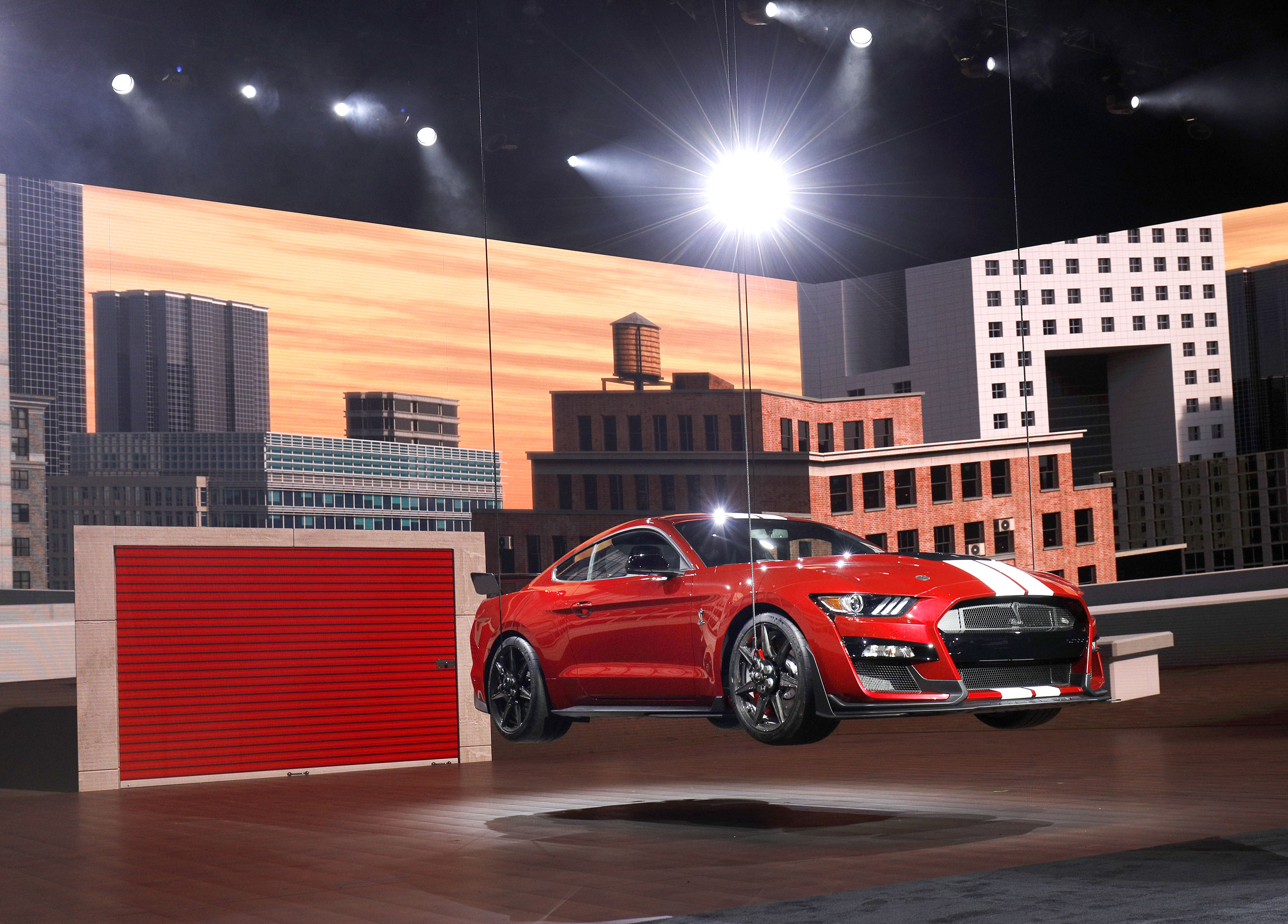 The fastest Mustang gets faster. The 2020 fastback Shelby GT500 gets a supercharged 5.2-liter V8 engine with a whopping 700 horsepower. The most powerful street-legal Ford ever built can go from zero to 60 miles per hour in around 3.5 seconds, with a quarter-mile time below 11 seconds, according to the company. It has a seven-speed automatic transmission that Ford says shifts faster than any manual gearbox. Ford said it transferred aerodynamic and chassis technology from the Ford GT and Mustang GT4 racing cars to improve the cornering. To cut weight, the car has a carbon-fiber driveshaft and aluminum cylinder heads. Inside, it gets a 12-inch instrument screen and available Recaro racing seats. The GT500 arrives in showrooms in the fall. Price and gas mileage wasn't announced.

Rather than exiting the sinking U.S. midsize sedan business like two of its Detroit competitors, Volkswagen is staying in by updating the Passat for 2020. But it's not spending huge dollars developing a new chassis or replacing engines and transmissions. VW did give the car new sheet metal (except for the roof) to make it look sportier and tweaked the existing 174-horsepower 2-Liter turbocharged engine. It also revamped the electrical system to handle more advanced driver assist features such as now-standard automatic emergency braking and blind spot detection. Passat U.S. sales were down 32 percent last year but could get a boost because Fiat Chrysler got out of the midsize car market and Ford will exit soon. The new Passat arrives in dealerships in mid- to late-summer. Price wasn't announced, but VW is trying to keep it close to the current base of $25,295 excluding shipping.

The heavy-duty Ram pickup that's designed to do serious work isn't just for serious work. Yes, the new version for 2019 to be unveiled in Detroit comes with an optional 400-horsepower, 6.7-liter six-cylinder Cummins diesel with 1,000 foot-pounds of torque that can tow more than 35,000 pounds and carry 7,680 pounds in its bed. But it also gets a smoother ride, softer interior finishes, and can come with real wood and leather and an optional 12-inch touch screen and 17-speaker Harman-Kardon sound system. The mammoth grille on the new version is 30 percent larger than the current one, and the fenders are a bit lower. "It's still big-rig styling," says Joe Dehner, head of Ram exterior design. The truck comes standard with a 410 horsepower, 6.4-liter V8. It loses 143 pounds from the current model thanks to an aluminum hood and lighter high-strength steel under the hood. Price wasn't announced. The heavy-duty, built in Mexico, goes on sale in April.

For those who want to race at the track on weekends and drive to work on Monday, there's the 2020 Lexus RC F Track Edition. The bulked-up track version of the freshened RC F performance coupe gets better aerodynamics due a fixed rear wing and lower front spoiler, both made of carbon fiber. The RC F refresh helped the car lose 176 pounds over the previous version, and the track edition loses another 55 pounds due to lighter wheels and brakes and a titanium exhaust system. Yet the brakes are bigger to handle the heat of the track. Both versions share a 472-horsepower 5-liter V8. But the RC F Track is slightly faster from zero to 60 mph at 3.96 seconds. The new versions will get to showrooms around April. Price and gas mileage wasn't announced.

© 2019 CBS Broadcasting Inc. All Rights Reserved. This material may not be published, broadcast, rewritten, or redistributed. The Associated Press contributed to this report.