As was mentioned numerous times on the GRAMMYs Sunday night, we're nearing the 50th anniversary of the Beatles' first appearance on the Ed Sullivan Show. Some might ask, how many times do we have to pay tribute to a band who broke up 44 years ago? Why do we still love them? Those are questions that John Lennon would likely respect, if were still here today.

Monday night (Jan. 27) at the Los Angeles Convention Center, a cavalcade of big-name artists spanning generations and genres were showing their love, and paying tribute to the Fab Four while filming The Night That Changed America: A GRAMMY Salute To The Beatles, which airs Feb. 9 on CBS (which, in full disclosure, owns Radio.com). Dave Grohl, Alicia Keys, Katy Perry, Keith Urban, John Mayer, Brad Paisley and a reunited Eurythmics were among the artists to take the stage to put their spin on Beatles classics.

But another aspect of the show was the Beatles footage that was used in between performances. Watching the promo clips for "Strawberry Fields Forever," "One After 909" and "Penny Lane," plus footage of the band jamming in the studio, served as a great reminder of how much fun these guys were to watch. It was one of these film clips that opened the show; a video of the Beatles playing "All My Loving" ended abruptly, and Maroon 5 took over and finished the song, kicking off the first of many live performances. 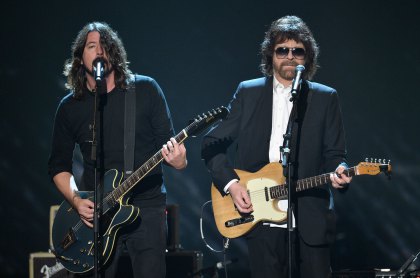 Some of the guests were not surprising. Ringo's brother-in-law Joe Walsh performed twice, once with Electric Light Orchestra's Jeff Lynne and George Harrison's son Dhani on "Something," and then again with Gary Clark Jr. and Dave Grohl (on drums) for "While My Guitar Gently Weeps." Of course, Grohl's presence wasn't surprising either; he and Sir Paul are bros and even shared a GRAMMY on Sunday (for their collaboration "Cut Me Some Slack").  "If it weren't for the Beatles, I wouldn't be a musician," Grohl told the crowd, adding that they are his "mom's favorite band, [his] favorite band and now [his] daughter's favorite band."