DETROIT (WWJ) - A protest against Governor Rick Snyder's polices began at Hart Plaza and ended inside the Coleman A. Young Municipal Building in Detroit.

AFSCME Local along with other union members were protesting hiring of an emergency manager for the city of Detroit.

Wearing suspenders and taped glasses about 500 protesters chanted "Revenge of the Nerds" as they packed the street - then the entrance of the building - effectively disrupting business for about 10 minutes before Wayne County deputies and Detroit police were called in to secure the building. 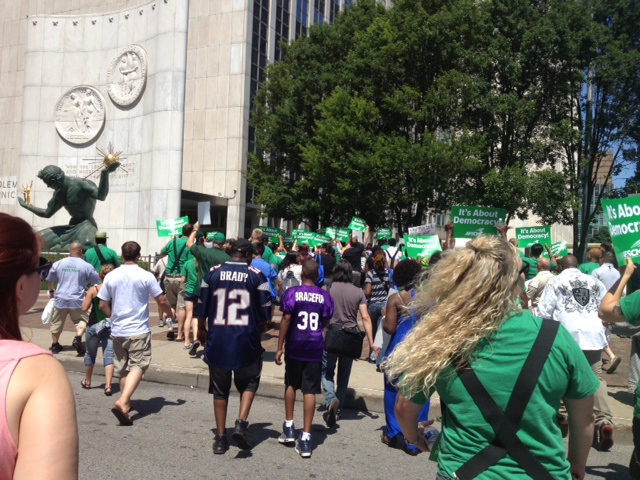 Reverend David Bulluck was among those protesting Friday afternoon.

"We are not throwing the towel in," said Rev. Bulluck. "This is the summer of our discontent and we will not let democracy be destroyed ... we will not let the city of Detroit be fixed by putting the blame on the backs of citizens and retirees."

Among the speakers Delia Enright who has been a 911 operator in the city for over 30 years.

"Governor Snyder and the powers that be claim to be interested in public safety, they claim that that is not something that is going to suffer and yet I'm here to tell you that we all know better than that right now," said Enright.