DENVER (CBS4) – State Rep. Steve Lebsock released a statement Saturday apologizing to three women accusing him of sexual harassment but they responded the same day with calls for him to resign.

"I have come to realize that it does not matter that, at the time, I may have perceived my words as playful," Lebsock said in his statement.

State Rep. Faith Winter is one of the three women he addresses in his statement. She came public Friday about an incident back in 2016 when she says Lebsock harassed her.

"I thought that since I did have a little more power," she told CBS4. "It was also incumbent on me to protect others."

Lebsock initially said he did not remember saying anything offensive to Winter in a previous statement on Friday. Winter said part of the reason she came forward was to prevent any more women from going through what she experienced.

"I don't want another woman in that building to be harassed," she said to CBS4.

Winter and two other women released a response on Saturday to the new statement from Lebsock.

"We hope Representative Lebsock takes full responsibility for his actions against us and many other women," said the statement signed by Cassie, Holly, and Faith. 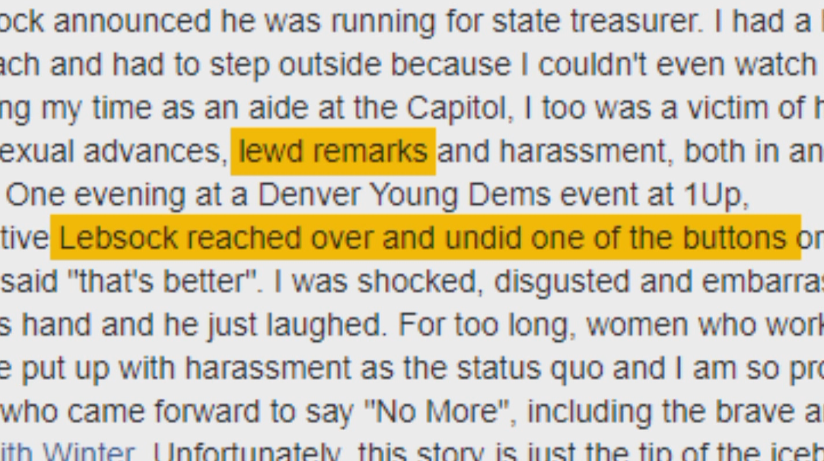 Lebsock is running for state treasurer. He and Winter are both Democrats. He acknowledged in his statement the impact of his actions.

"The only thing that matters is how I made these three women feel. I am sorry," he said.

But the three women said in their response they do not think he goes far enough.

"His apology was about how he made us feel but he never apologizes for his actions," their statement said.

Lebsock ends his statement by saying he will make an announcement about his position as a state representative and his candidacy for treasurer by Nov. 30.

The three women say they are concerned about a serious pattern in his behavior and said it would be best for him to resign. Winter also said in a separate interview that she believes there are others at the state Capitol that do not respect boundaries. Winter warned Lebsock she would share her story if she learned about other accusers, a decision she questions now that there are many more accusers.

"I regret a little bit not going public when it happened since it did happen to another woman," she told CBS4.