NOTE: This review reflects Destiny before "The Taken King," a substantial expansion to the game. The review likely doesn't represent the game's current state.

Imagine walking into a bakery and asking for a single slice of cake. Imagine the surly baker, instead of asking you to pay for the slice with a portion of your daily wage, yelling, "Get in the back and bake me three cakes!"

You oblige because you don't deal well with confrontation (I think those skills skipped our generation). After you bake three perfect cakes, imagine the baker rewarding you by cutting a single slice out of one, then cutting that slice in half and handing it to you.

Imagine your disappointment at receiving half of a slice of cake for all your hard work. Imagine the trepidation and anxiety the next time you walk into a bakery. Imagine how you'd feel dumb for eating cake, which should be an amazing experience.

In case you don't know much about it, Destiny is a video game created by Bungie, the developer that grew the Halo franchise for Microsoft. Destiny mixes first person shooter gameplay with massively multiplayer online mechanics. The game isn't meant to be a casual, action-filled, 10-hour jaunt through an alien universe, but a goliath you willingly sacrifice hundreds of hours to.

And it's not all that fun, even after two substantial DLCs and multiple updates, including one on June 2nd. Personally, this feels like a real bummer. I was hopeful that more content and numerous fixes would allow Destiny to grow into the great game it was meant to be, but that hasn't happened yet.

The armor and weapons in the game are aesthetically dull in a very paint-by-numbers way. Sure, the game looks great, but not distinctly, with visuals that are nearly indistinguishable from the next Tom Cruise or Will Smith sci-fi blockbuster. I have yet to encounter an item that I want to use based only on the fact that it looks badass.

The way stats work for gear leaves a lot to be desired. With armor, you eventually find yourself relying on one goddamn number: light. This is the stat you need to level yourself up beyond level 20. More often than not, whatever armor offers the highest light is what you'll wear. There are weapons and armor pieces that offer unique reasons to use/wear them, but most of them are only obtainable late in the game. There's nothing the least bit alluring as you climb to the top of the mountain where the good stuff is stashed. It seems like the journey should be at least a little enjoyable, right?

Well, the journey isn't enjoyable. The multiple ways to play the game – story mode, strikes, raids, PVP -- mostly amount to repeatedly killing things on the same maps with the same tactics, offering little variation. Over and over. While the game actually handles really well -- this is the first console shooter that didn't leave me wanting a keyboard and mouse -- popping off headshot after headshot against alien enemies gets boring after a few hours. 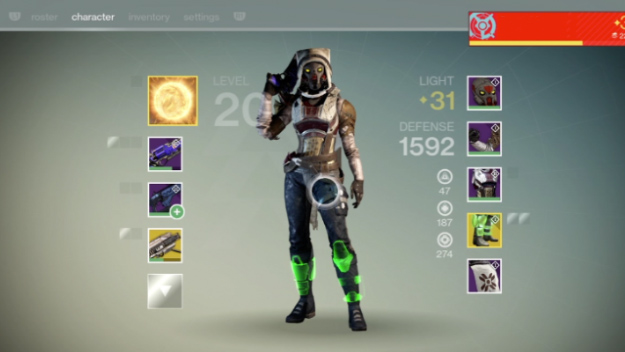 Making things even more frustrating, the social aspect of Destiny is broken. Let's be clear, people creating communities around your game because they like it? Good. People creating communities around your game to make up for missing mechanics, like the ability to allow individuals to find each other to play difficult content... Very bad. To be clear, the game isn't missing a matchmaking system entirely. For some content, it's happy to randomly match you up with players of similar level. But it doesn't do this with the more difficult parts of the game, nor does it make communication with other players easy. This forces you to go outside of the game to find other players to play with if you want to take on the more challenging content.

That's the weirdest part about the latest DLC, House of Wolves. Its content was actually preferable to The Dark Below, adding more intriguing story elements that twisted old maps into almost unrecognizable gameplay, along with a mildly interesting, not-quite horde mode called Prison of Elders. Sadly, Bungie negated that progress with more endgame content that lacked a matchmaking system.

Between players too serious and dedicated to the grind, and players so silent they might as well be NPCs, I ended up feeling lonely far too often as I played Destiny.

Shame on you, Bungie, for making me lonely.

Then there's the "fun" part: the raids.

After completing the two raids – longer, more involved levels with big rewards -- I realized something: Destiny's raids seem great... because the rest of the game isn't great.

Consider my brother... He's in his thirties and still gives people wet willies. Spend 24 hours with him, and an hour or two with me will seem downright blissful. Does that mean my very character exudes bliss?

No. Of course not. 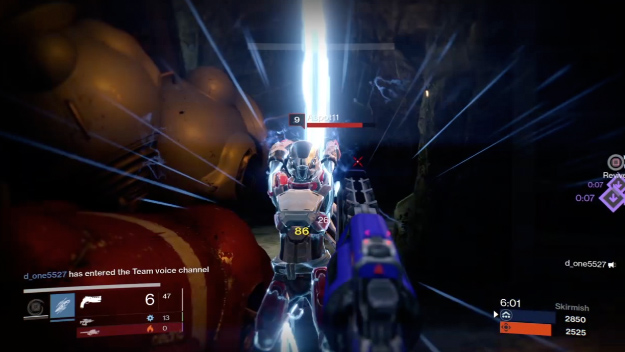 But! Destiny isn't an outright bad game. It's beautiful enough to cause you to occasionally stare at the sun breaking through the clouds as enemies shoot at you. If you have to use video games as an excuse to keep in touch with friends, Destiny will mostly allow this (though its mechanics aren't always ideal for having actual social interactions). And I'd be a liar if I said its basic components don't draw on the obsessive parts of the brain that keep people playing MMOs.

I just think there are better games to satiate these needs. Like hunting humans, for example, the greatest game of all.

Destiny's just mundane in the worst kind of ways.

Destiny doesn't allow any of this in any fulfilling way. It makes you miss the worst scenes in the latest Nic Cage movie and annoys the hell out of your partner. And it does this without truly convincing you the game rewards are worth it. It asks for everything and gives very little in return.

Destiny is your friend Bungie's child. The kid's okay. When you see photos of the li'l tyke in your Facebook feed, you're happy to like the posts.

Then one day, you open your front door to collect the newspaper because in this hypothetical fantasy world people still read physical newspapers, and sitting on your stoop is a basket. Inside is Destiny. Destiny is crying. Destiny is hungry. Destiny has poo-pood. Sure, you could pick Destiny up. You could raise Destiny as your own, resenting Destiny and your friend Bungie as you go through the motions of parenting. You'll never love Destiny though. And it will gnaw on you till the end of your days.

My suggestion? Close the door, back away slowly and hope a pack of wolves kidnaps the kid to raise them as their own.

Destiny is out for PlayStation 3, PlayStation 4, Xbox 360, Xbox One. I played the Playstation 4 version.