CHICAGO (CBS)-- Police are calling a 13-year-old boy a "person of interest" in the murder of Frank Aguilar, a nurse who was fatally shot in in a drive-by shooting in Little Village.

Police said no charges have been filed at this time. Investigators are working with the Cook County state's attorney to firm up their case.

"It is not an easy process," Aguilar's uncle, Joshua Alcazar, said Friday. 'That's why I continue to say the community needs to gather any information or video or surveillance that they have of the events that could lead to the prosecution of the individual or other suspects the police are questioning."

Bond was denied Thursday for the 19-year-old man charged with first-degree murder in this case.

Armando Lopez, was arrested shortly after the murder on Frank Aguilar, 32, on the night of Tuesday, Nov. 12. But he was not charged with the murder until Wednesday night.

Police identified Lopez as the driver, but said they were still looking for the triggerman Thursday. Police say Aguilar was the victim of mistaken identity.

As to the theory that the shooting was a gang initiation, police aren't confirming that.

"The gang initiations occur at a young age in order to get in they have to kill an individual of the opposing gang," said Alcazar. "As for the suspicion whether this was an initiation, yes that is an idea."

'We are very heartbroken to understand that this is such a young individual."

Aguilar was shot in the chest on Nov. 12 outside his sister's home in Little Village. He had just finished his nursing shift at the time. 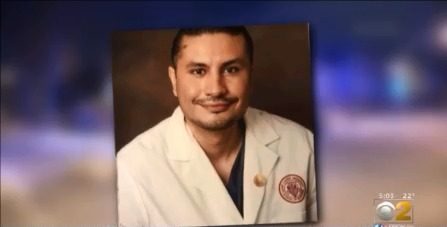 He was still wearing his scrubs from work at the time and was carrying laundry and snacks for his niece and nephew.

His family says he called 911 and even gave himself first aid, but later died at the hospital.

At the Leighton Criminal Courthouse on Thursday, Aguilar's mother left the courthouse in tears. While the charges in the case have brought a taste of justice the family has been asking for, it didn't ease the pain.

Police Capt. Gilberto Calderon said he made a vow to Aguilar's parents after the fatal drive-by shooting.

"I promised Frankie's parents and the members of the community of Little Village that we would stop at nothing to find these offenders, and that's exactly what has happened today," Calderon said.

Lopez, 19, was arrested a few days later after a car chase from Little Village all the way to west Chatham.

Police said the sport-utility vehicle he was in matched the description of the car used in Aguilar's shooting.

But he wasn't formally charged with Aguilar's murder until Wednesday.

Police said the delay in murder charges in the Aguilar case was due to a lack of eyewitnesses. But ultimately, detectives used pod cameras, license plate readers, and cellphone records to Lopez to that silver Jeep involved in the shooting.

They said it was the same kind of assistance that brought charges against the suspect who police say shot a 7-year-old girl who was trick or treating on Halloween.

Police say Aguilar's shooting appears to be a case of mistaken identity in the midst of an ongoing gang conflict.

Aguilar's fiancée, Lindsey Owens, told us that more than just Frank's life that was cut short.

"For all the dreams he had that will never come true, for all the people he could have helped, and for all of us who have had our world cracked open from losing him," Owens said.

Police say they do believe they know who the shooter is in the case, though that person has not been charged.

Lopez was ordered held without bond after being arrested following the traffic pursuit.

In October 2018, Lopez was arrested for allegedly breaking into cars. He was released on an I-bond, meaning he didn't have to pay any money, and the charges were dropped in February. CBS 2 Investigator Megan Hickey reported.

The same month that those charges were dropped — he was charged with unlawful use of a weapon and driving on a revoked license. Then in March, he was also charged with carrying a shotgun without a valid gun license. He pleaded not guilty and again was released on an I-bond.

Lopez is due back in court in the murder charges on Jan. 2.