(CBS) While listening to Connor McKnight sit in for Dan Bernstein on Wednesday, Dec. 11 on The Boers and Bernstein Show on 670 The Score, he referenced an NFL salary cap site, overthecap.com.

This site is not for the faint-hearted—there is a tremendous amount of information. If you can make sense of this site, you might have a bright future as a NFL team capologist, so click on the various buttons and see the wealth of information available. All tables in this post were developed using data from this site.

This chart shows the available cap space for each team in 2014:

The cost to the Bears of franchising Jay Cutler is around $16 million, or roughly one-third of the Bears available cap space. This begs the question of the impact of releasing certain players:

These are the players who can add the most cap space with their release, a total of around $30 million if Julius Peppers, Brandon Marshall, Matt Forte and Lance Briggs were cut. Of course, this isn't going to happen and no reasonable person would suggest it—I show it only for informational purposes.

These are the Bears free agents for 2014: 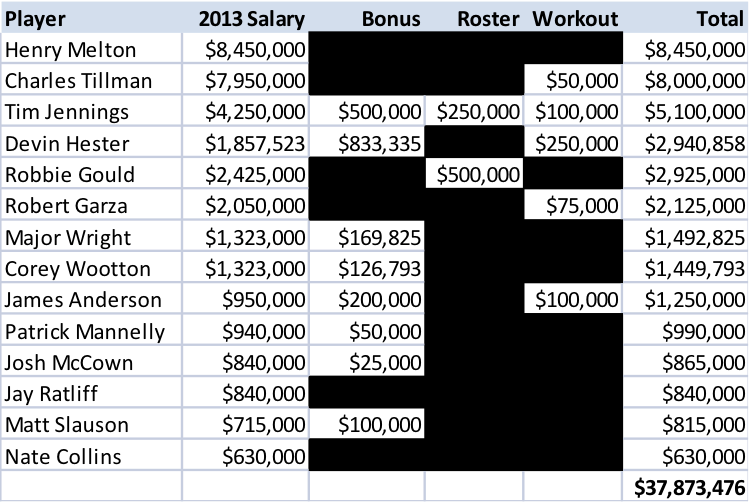 It would be pure speculation on my part to suggest all of these players will be brought back or that the price will remain the same, but at least the Bears have the flexibility to do all sorts of things:

The possibilities are virtually limitless. And, to add one more level of complexity, these are selected defensive free agents available for 2014 along with their 2013 salaries:

It will be a very busy offseason for the Bears, but they have the luxury of cap space room to maneuver. They won't be hamstrung by financial restrictions or dead money and will have all the flexibility they'll need to address their glaring needs on defense. Can a defense be overhauled in one year? Is Jay Cutler the answer at quarterback in the short term? These are questions Phil Emery is paid to answer, and it's far easier to develop those answers with cap space room.

Scott Lindholm is a columnist for CBSChicago.com and 670TheScore.com and frequent contributor to The Boers and Bernstein Show, known affectionately as Scott from Davenport. You can follow him on Twitter @ScottLindholm.