CHICAGO (CBS) -- Police body cam video released shows the aftermath of a horrific discovery on the city's Northwest Side this past fall.

The footage shows Krsyztof Marek – the man suspected of killing five neighbors – as he surrendered to officers.

You can hear the shock in neighbors' voices as Chicago Police respond to the scene.

"I can't even move my hands," one neighbor is heard saying.

The victims were all killed in their condo building in the 6700 block of West Irving Park Road in the Dunning community on Saturday, Oct. 12 of last year.

"Police!" an officer is heard saying before entering a condo, before she exclaims, "Oh my God!"

The video is blurred as police walk through the condo where the first four people were shot dead.

First responders tried their best to save the victims, but all five die. Meanwhile, the search for the suspect did not take that long.

Suddenly, officers are seen pointing at a man. One pulls a gun, but then puts it down as the accused shooter approaches police with his hands up. Marek is handcuffed.

Investigators later learned Marek had lived in the building for 15 years. The former condo board president had apparently been feuding with his neighbors.

An officer asks him, "You want to tell me what happened?"

Marek replies, "Uh… I'd rather wait."

The officer replies, "OK, get in the car." 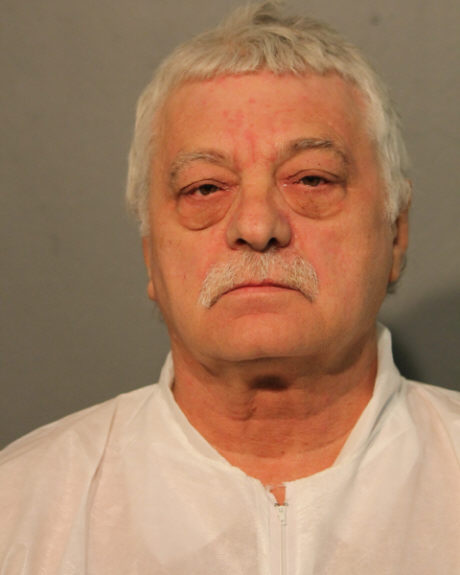 Prosecutors said Tsvetanka Kostadinova and Ivaylo Popov, both 43, were sitting down for their dinner that Saturday evening in unit 2D with Popov's mother, 65-year-old Iskra Pourel-Popova, and her boyfriend, 61-year-old David Hanik, waiting for a fifth family member to arrive.

As they were all sitting around the dinner table, Marek walked in through the front door, and shot all four with a .40-caliber handgun, Murphy said. All four of their bodies dropped to the floor around the table, prosecutors said.

He then walked up to the third floor and unit 3C, still carrying the gun, and went into an apartment where 53-year-old Jolanta Topolska was sitting on her couch, and shot her in the abdomen. Meantime, her son, who had heard the gunfire downstairs, had gone out the back door to investigate, and was walking back in as Marek was pointing the gun at his mother, Murphy said.

Topolska and her son ran out the back door of the third-floor apartment, and Marek shot Topolska in the back of the head, according to Murphy. Marek then walked back to his condo, put his gun on his coffee table, and exited the front of the building as police arrived.

Murphy said Marek told police, "I think you're looking for me, I did it," and then told officers the door to his condo was open, and the gun was inside.

Prosecutors said that Marek had not been paying his mortgage or his condo association fees, and the homeowners' association was trying to evict him.

Marek also filed for bankruptcy in 2017, according to court records. Foreclosure lawsuits were filed against him at that time.

They offered a jumbled glimpse into the deadliest attack in Chicago in years.

Among the statements Marek wrote were:

"Some people living in this same building are against me."

"Nothing has been done and I can't wait any longer and I'm very determined to expose those people and this activity - I will contact the press because won't let this slide."

"This illegal activity is torture… and yes I am the subject of the crime."

Marek is charged with five counts of first degree murder. He is being held without bond and is due back in court in February.