Starting Monday, an activist group plans to stage a weeklong sit-in outside a dispensary, demanding reparations for ex-convicts who were put away for a drug that has now been made legal.

As CBS 2's Marissa Parra reported Sunday, it has been a blockbuster year for recreational marijuana in the Land of Lincoln. But indeed, not everyone is celebrating.

"It's wrong for them to benefit off the same product that they incarcerated us with," said Tyrone Muhammad, a founder of the group Ex-Cons for Community and Social Change.

Muhammad and Greg Sherman, also of the organization, plan to camp outside a specific cannabis dispensary for the next week.

"To highlight the inequities and injustice of the cannabis industry," Muhammad said.

It is no secret the state is lagging when it comes to social equity in the billion-dollar pot industry. CBS 2 has repeatedly covered the delays and lags with the program meant to fight that.

So far, out of nearly 100 dispensaries in the state, none of them are minority-owned.

Meanwhile, sales in Illinois topped $115 million last month, and a record-setting $116 million the month before. Muhammad and Sherman say that feels like a slap in the face.

"I was arrested as a youth a number of times for marijuana," Muhammad said.

"I missed our daughter being born for a cannabis charge," said Sherman. "It was less than 4 ounces, and this was in '98."

At the end of May, the state approved a bill and a lottery that promises to focus on social equity – a fairer shot for people of color looking to get their license. But Muhammad and Sherman want to take that a step further.

"Although weed is legal now, ex-cons still cannot work in the cannabis industry or dispensary; can't apply for a license, although we paid our debt to society," Muhammad said.

The Illinois Department of Financial and Professional Regulation told CBS 2 in a statement Monday, "There are no automatic barriers to people with convictions from owning or working in the cannabis industry in Illinois. Licensure may be denied under certain grounds detailed in the Cannabis Regulation and Tax Act."

Regardless, Muhammad and Sherman want not just more pot shops with minority ownership, and they don't just want expungement for marijuana convictions – they want reparations for ex-cons who suffered directly from criminal penalties for marijuana possession or distribution.

"Look at how much money this city has taken away from Black and brown families for, like he said, small amounts of marijuana," Sherman said. "It's an injustice we must stand [against] right now."

"If we don't fight, who will?" Muhammad said.

Muhammad said reparations for those convicted of marijuana charges are mandated given how much they suffered.

"Expungement alone doesn't deal with 20, 30, 50 years of incarceration and destruction to our communities by taking black men off the streets," he said. "Ex-cons who were taken away for marijuana need to see our fair share of profit after all we and our families have been through."

"The majority of people I know in my circles have historically been incarcerated, harassed, locked out of jobs, or prevented from having jobs because of marijuana," added Sherman.

Again, Muhammad and Sherman plan to be outside one of the Chicago dispensaries in the area for the entire week. Details are below. 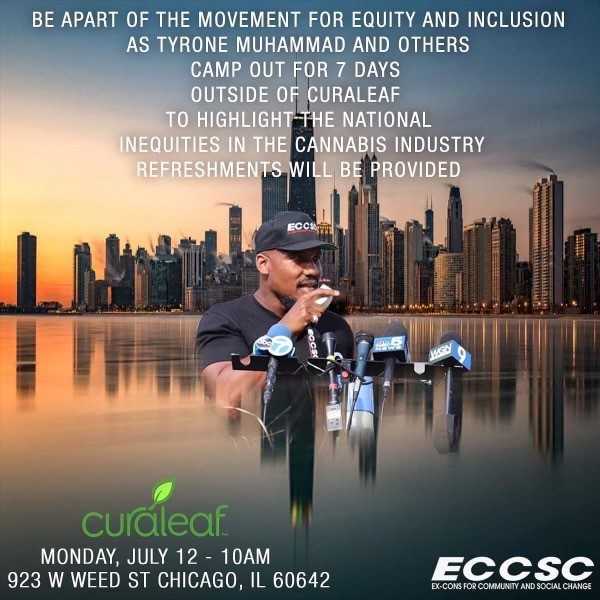 The Illinois House and Senate have already has approved House Bill 1443, which creates more than 100 new pot shop licenses, and gives people of color a fair shot at winning them during the lottery process. At last check, it was sent to the desk of Gov. JB Pritzker on June 25, but has not yet been signed.