CHICAGO (CBS) -- A South Haven family is demanding their neighbor face charges after they say he beat their dog, causing it to lose an eye.

"His spirit is just broken," said the dog's owner Courtney Gutowski. "He didn't deserve this."

Courtney and Ron Gutowski were out of town this week. They arrived home Friday morning and found their one-year-old dog, Echo, in a battered state. 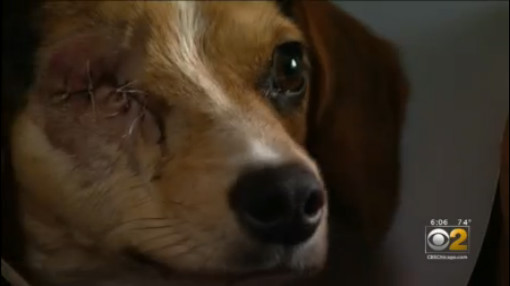 "When I held him he was very jumpy, and he was trembling," Gutowski said.

Wendy Miller is a family friend and was house sitting. On Wednesday morning she let Echo out in the yard, and moments later, she heard him bark. She went outside and says she saw the neighbor hitting the dog.

"The guy was leaning halfway over the fence and beating Echo with this stick on the head," Miller said. "I seen him hit him twice on the head. I'm not sure how many times before that."

She rushed Echo to the veterinarian.

His eye socket was shattered, and his right eye had to be removed.

"I was scared, and I didn't know if he was going to live or die," Miller said.

This isn't the first time this happened.

The family said that back in March the neighbor threw chunks of ice at Echo. Fortunately he wasn't injured.

"It all could have been prevented had the police taken me seriously back in March the first time he was attacked," Gutowski said.

CBS 2 tried to find out from police whether the neighbor has been questioned but was told no one can talk about it until next week.

CBS 2 was also unable to contact the neighbor to hear his side of the story.

"This was barbaric, and I hope he's ashamed of himself," Gutowski said.

Echo's family said it will take at least six months for the dog to recover.