(CBS) Since arriving in 2007, running back Adrian Peterson has been the centerpiece of Minnesota's offense. In a league of genetic exceptions, Peterson stands out. He's a rare combination of brawn and breakaway speed who inflicts as much, if not more, punishment on brave tacklers.

Yet for as productive and scheme-altering Peterson has been, the Vikings haven't taken full advantage of his presence on the field.

However, there's a tradeoff to that strategy.

Dropping a strong safety leaves outside cornerbacks singled up with only one deep safety to help over the top. Consequently, the play-action game opens up explosive opportunities for the passing game.

Through the years, the Vikings have struggled to find the right set of receivers and quarterback to properly complement Peterson and take full advantage of the opportunities he creates.

They have gone through 10 quarterbacks before settling on 2014 first-round pick Teddy Bridgewater. Of the current group of receivers, they spent a 2013 first-round pick on Cordarelle Patterson and traded for Mike Wallace this past March. Patterson has been a bust, and Wallace has yet to make an impact commensurate with his pay grade.

Diggs was a five-star recruit coming out of high school. His physical gifts were never a question. He's a sudden, explosive athlete and a natural hands catcher who's effective in every passing zone. The concerns about his game centered around his focus, durability and overall physicality.

Surprisingly, Diggs was a healthy scratch for the Vikings in the first three games this season. He made his NFL debut earlier this month against the Broncos. Despite the small sample size and only playing half of the team's games, he leads the Vikings in receiving yards (328) and catches for 20-plus yards (eight). He's made an immediate impact on the field and is emerging as a legitimate threat who must be accounted for on every snap.

Vikings offensive coordinator Norv Turner is finding different ways to get the ball into Diggs' hands in space. He's deploying him from both the slot and outside and targeting him in a variety of packages.

Diggs' body control and sheer athleticism stand out on tape. But the skill that's most impressive considering where he is in his development curve is his route-running ability. He has smooth footwork, fluid hips, a quiet upper body that doesn't tip his route and loses no speed at the top of the stem to gain separation.

Here's an example from last week's game against the Lions.

The Vikings come out in 11 personnel in a trips right formation from an offset shotgun set with Diggs (circled in purple) lined up as the split end. Turner dials up a sail route combination, which is a three-level stretch and a perfect call against the Cover-3 scheme the Lions deploy. 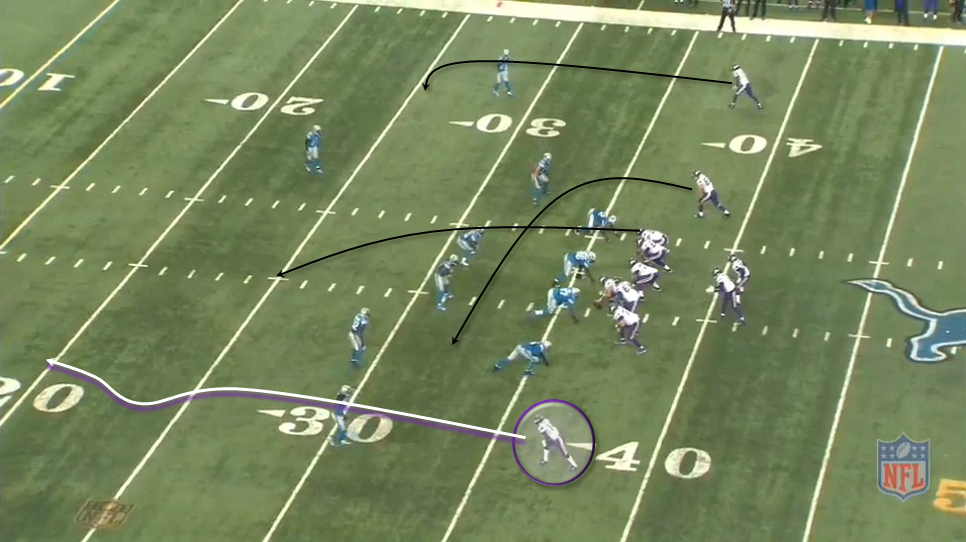 Not only was this a great route to attack the Lions defense, Diggs' route was executed exactly as it's drawn up on the whiteboard. He releases up the seam, stems cornerback Rashean Mathis to the sidelines, only to break back up the field to create separation and a huge throwing window for Bridgewater to drop the ball into.

Bridgewater leads Diggs, who laid out to make one of the more remarkable catches so far this season. 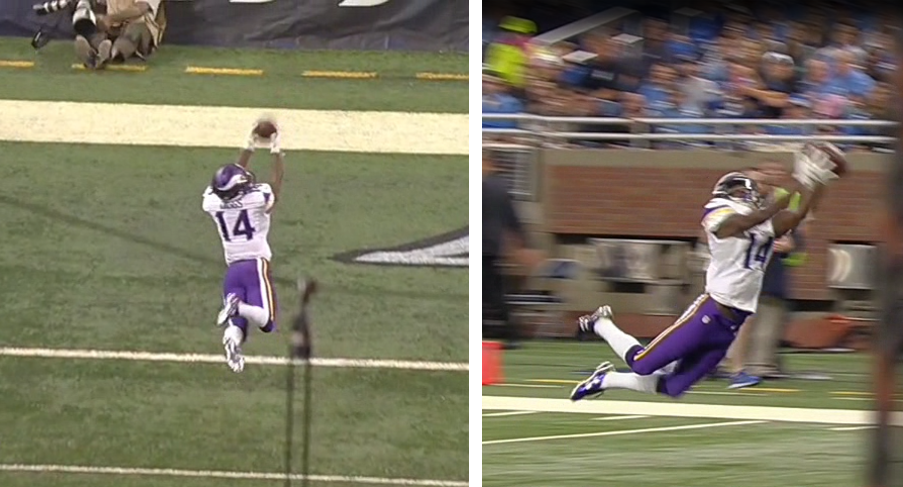 Diggs has made at least one play like this in each of the games he's played in so far. He turned Aqib Talib, one of the league's top cover cornerbacks, around on a crisp deep out route in his first start against Denver on a 21-yard reception.

The Bears will likely elect to drop their strong safety down into the box for run support against Peterson. This will leave the Bears' cornerbacks singled up on the outside against Diggs with single-high safety help. Not only do the cornerbacks need to be disciplined in their backpedal, they'll have to resist the urge to peek into the backfield. Any hesitation or false steps against a receiver like Diggs will allow him to stack on top and create deep throwing windows.

The Vikings have gone more to their play-action game since Diggs entered the lineup. This is out of necessity as their offensive line struggles to protect on deeper dropbacks, but it's also related to Diggs' emergence and the chunk plays he's generating in the passing game.

Dan Durkin covers the Bears for CBSChicago.com and is a frequent contributor to 670 The Score. Follow him on Twitter @djdurkin.