(CBS) The Bears' historically bad defensive performance in 2013 -- ranking dead last in run defense, sacks and yards per play allowed -- precipitated a series of significant changes in both personnel and coaches.

On the defensive line, Julius Peppers and Corey Wootton have new addresses, while Shea McClellin has a new position. They've been replaced by Jared Allen, Lamarr Houston and Willie Young.

Were the Tibesar and Phair firings appeasements to the pitchfork and torch wielding mob? In Tibesar's case, no. The Bears invested high draft picks in linebacker prospects Jon Bostic and Khaseem Greene, who were then forced into action and made marginal progress in both technique and assignment from their first to last snap of the season.

Prior to coming to the Bears, head coach Marc Trestman went through four defensive coordinators in his final four years in Montreal, so clearly, he's not averse to making changes for the betterment of the team. But given that carousel of coordinators, can he be relied upon to find the right guy?

Given how thorough he and general manager Phil Emery have proved to be with every major organizational decision, it's safe to assume they took in the totality of the situation last year as they went through the process of evaluating Tucker's performance.

The aforementioned injuries at every level -- particularly the front seven -- devastated the defense, exposing a lack of quality depth. The root cause for the lack of depth traces back to years of personnel failings in the draft that predated Tucker's arrival in Chicago. More often than not, talent wins in the NFL.

But there are elements that Tucker had direct control over, which he should be judged by and held accountable for, specifically in-game adjustments, communication and pressure packages -- the last of which has plagued Tucker his entire tenure as an NFL defensive coordinator.

Here's a list of the sack output of defenses Tucker has coordinated since 2008:

There's no denying that Tucker has had questionable talent to work with in his previous stops, as well as last season with the Bears. But when you dig a little deeper into the film, Tucker hasn't shown much creativity in his pressure packages.

So let's go to the film room to take a closer look at how the Bears tried to generate pressure with extra defenders this past season.

The Bears deployed their best and most diverse defensive game plan in their Week 3 matchup against the Pittsburgh Steelers. Coincidentally or not, the Steelers game was the last game the Bears played at full strength on defense. They showcased a variety of pressure packages, generating three sacks, three fumbles, two interceptions and two defensive touchdowns.

Out of their base personnel in a 4-3-4 alignment in an under front, the Bears ran a "smash" (Sam and Mike linebacker) blitz. Pre-snap, the Bears show a two-high safety look. Post-snap, they roll Major Wright up in a "sky" (safety force) Cover-3 look, with linebacker Lance Briggs taking the middle hook zone and defensive end Wootton carrying the running back into the flats. 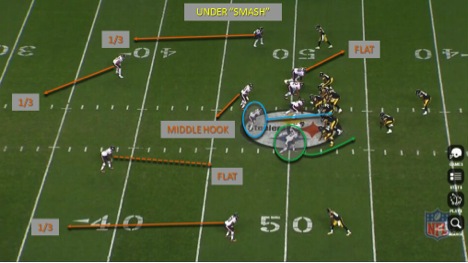 The Bears send defensive end McClellin on a "long stick" stunt from the five-technique to the A-gap, across the face of the guard. As the guard rotates to pick up McClellin, Mike linebacker D.J. Williams times his blitz perfectly through the B-gap. On the edge, Sam linebacker James Anderson delays to give the illusion that he's carrying the fullback to the flats, only to blitz through the C-gap. 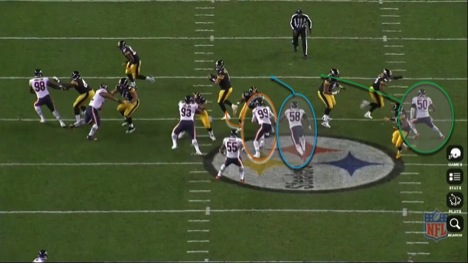 The action of McClellin and Anderson gave Williams an unimpeded path through the B-gap to drop quarterback Ben Roethlisberger for an eight-yard loss. This was a well conceived and timed zone-blitz design that took away Roethlisberger's hot reads, and the stunt split the left guard and tackle.

The Bears also scrambled Roethlisberger's hot read on another blitz. This time nickel back Isaiah Frey (circled in green) forced the issue. The Bears are lined up in a "mug" look (more on that below), in a 4-2-5 alignment, showing a blitzer in every gap, using an eight-man line.

The Bears give the illusion of Wright being the single high safety, but they rotate he and Chris Conte (red arrow) at the snap, playing man coverage (denoted in orange dotted lines) behind this six-man pressure. 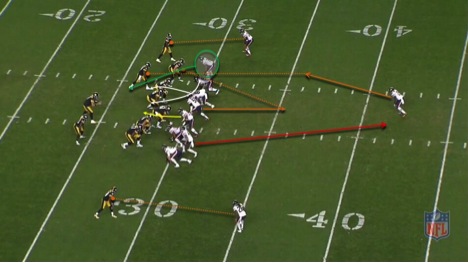 Roethlisberger sees Frey coming on the blitz, so he assumed Jerricho Cotchery would be uncovered as his hot read. However, by rotating Wright up, he replaced Frey in coverage, intercepting the errant throw for a pick-six. 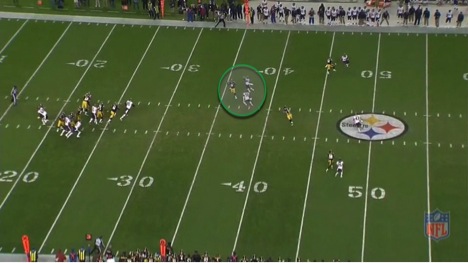 For some reason, be it injuries or a stubbornness that the existing defensive line talent would find it's way, the Bears significantly dialed down the pressure over their next eight games, blitzing eight or fewer times in each, losing five games during that stretch.

Not only did the Bears blitz less over this stretch, they primarily brought pressure from the same look, their "mug" package. Mug is a double A-gap pressure in which both linebackers threaten to blitz the immediate gaps between the center and guard (the A gaps). 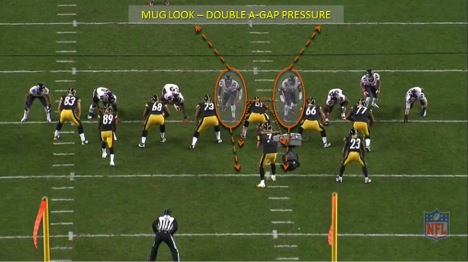 When teams mug the A-gap, they're creating conflict on the offensive line and forcing the center to quickly adjust the protection scheme and tip their hand.

The mug package can be successful, and every team in the league uses it. However, the Bears' reliance on this look made it easier for teams to prepare and adjust their protection schemes. The only variations they added to the package were to occasionally cross the linebackers on a "X cross" or "cross dog," run stunts and send the slot corner.

In a passing league, defenses must create pre-snap conflict in opposing protection schemes. When this is achieved, a quarterback's decision-making process is sped up, which leads to post-snap disruptions. Relying purely on your front four to generate pressure is imprudent.

All season, the Bears failed to generate consistent pressure from their front four. Thus the onus fell on Tucker to design schemes to bring pressure from the second and third levels of the defense with the minimal goal of creating a negative play. In the end, there simply weren't enough pass rush disruptions.

Per ProFootballFocus, the Bears blitzed on 30.58 percent of their snaps in 2013 (170 blitzes on 556 dropbacks), which is right around league average. However, on those blitzes, the Bears ranked 24th in the league with actually creating a disruption, which is low productivity on plays where you're exposing your secondary.

Add it all up, and, it's safe to assume on days the Bears aren't getting pressure with their front four alone, the opposing quarterback is going to work from clean pockets with more time to throw.

The pieces Emery has added this offseason give Tucker the best collection of pass rushers he's ever had to work with.

By bolstering the pass rush with a new group of defensive ends, Tucker will finally have an opportunity to work with legitimate talent up front. Thus, next season will prove if the poor output has simply been a byproduct of a lack of talent and not scheme or a combination or both.

Emery has essentially eliminated excuses in 2014. I sense a hashtag in the offing.