CHICAGO (CBS) -- Heavy snow pounded the Chicago area for much of the weekend, in the largest snowstorm the area has seen in more than five years.

A Winter Storm Warning came to an end until Sunday evening, and a Lakeshore Flood Advisory expired early Monday.

As the storm moved out late Sunday, 12.9 inches of snow were reported in Romeoville, 12.7 inches Peotone, 12.4 inches in Downers Grove, a foot exactly in Deerfield, 11.5 inches in Wilmette, and 11.4 inches in Roselle.

O'Hare International Airport got 10.8 inches, the most from a single snowstorm since November 2015. Midway got a total of 11.3 inches. Lincoln Square and Ukrainian Village ended up with 9.5 inches.

In addition to piling up to a foot or more, the weekend snowstorm dropped visibilities and made for slick road conditions. It was blamed for two separate pileups on the Dan Ryan Expressway at 47th Street Sunday morning, which together left three people injured.

The snow was also blamed for a roof collapse earlier Sunday at an abandoned building at 8147 S. Racine Ave. in the Auburn Gresham neighborhood. The Department of Buildings said a bow-truss roof gave in due to a large load of snow.

The Department of Streets and Sanitation spent many hours clearing arterial streets during the snowstorm. The department said a new crew would take over at 10 p.m. Sunday and begin clearing residential streets.

Salt spreaders had been working since the snow began falling Saturday afternoon.

As the storm moves east, it is turning to a nor'easter on the East Coast. The New York City Tri-State Area was bracing Sunday night for at least 6 to 12 inches of snow, and for 18 to 24 northwest of the city.

Meanwhile back in Chicago, another shoe is set to drop late in the week, CBS 2 Meteorologist Tim McGill reported.

Temperatures will be around or above average through Thursday. But the coldest air of the season so far may arrive just in time for this weekend with teens for highs by Saturday.

On Sunday morning, wind chills could be around 40 to 50 degrees below zero -- the coldest we've seen in a couple of years. But that could change as it is a long way off. 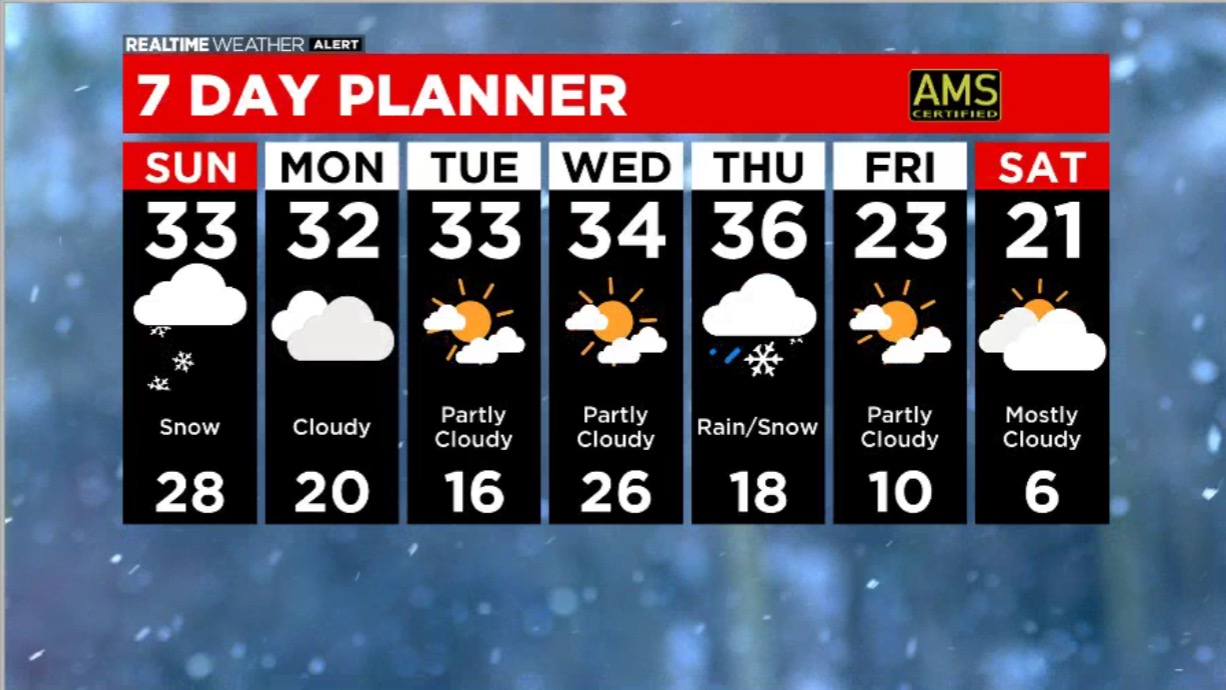