CHICAGO (CBS) -- In celebration of both the NFL and the Chicago Bears 100th seasons, the "2019 NFL Kickoff Experience" is coming to Grant Park Thursday.

The free event will take place from noon to 10:30 p.m. and will feature performances, photo opportunities, games and other NFL attractions. Fans are encouraged to register for NFL OnePass to get updates and information on the event.

The opener of the NFL's 100th season between Green Bay and Chicago at Soldier Field will be shown live on "massive screens throughout the park."

Fans will have the chance to take a photo with the Vince Lombardi Trophy, according to NFL officials.

The event will also have a full collection of 53 Super Bowl rings to visit.

Bears legends Richard Dent, Jim McMahon, Matt Forte and Charles Tillman will be at the event signing autographs throughout the afternoon.

The autograph schedule is listed below:

The performance schedule is listed below:

To get the NFL training camp experience, games will be set up throughout the event.

Fans can kick a field goal through NFL uprights, throw a deep pass over defenders into a drop-in net and field a booming punt launched from a machine.

Uniformed body-cast molds with NFL team members and over-sized helmets will make for fun photo opportunity attractions for fans to visit. There will also be an NFL auction.

Tailgate food from Chicago vendors will be available for purchase at the event.

NFL officials are encouraging fans to use public transportation to attend this event.

Road closures are listed below: 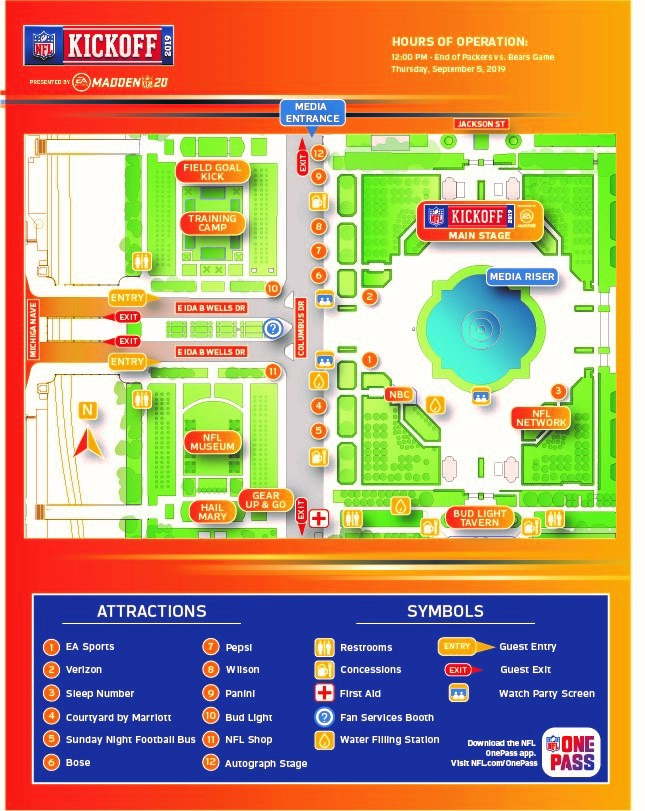