STURBRIDGE (CBS) -- State police say a tractor-trailer carrying more than 1,200 propane tanks was struck by an erratic driver of another tractor-trailer on Interstate 84 near the Massachusetts-Connecticut line on Thursday morning.

The crash happened in the eastbound lanes around 7:30 a.m. at the Sturbridge-Holland line.

Before the crash, the driver of the propane tractor-trailer had pulled over into the breakdown lane after seeing a Trooper in the median. The driver parked there because he wanted to let police know about an erratic driver he saw minutes earlier. 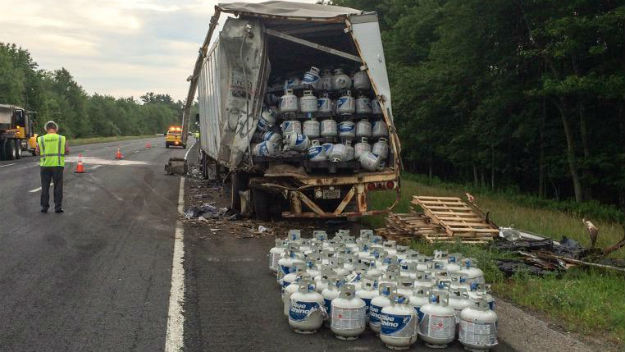 According to police, the erratic driver then rear-ended the parked tractor-trailer.  It had been hauling 1,224 full Blue Rhino tanks, many of which ended up scattered across the highway.

That driver suffered minor injuries and was taken to an area hospital.

No one else was hurt.

The accident caused delays on the highway and backups into Connecticut. Some lanes were closed briefly for the cleanup.