BOSTON (CBS) -- Al Horford did not play in Monday night's 112-104 Celtics win in Miami, taking the evening off to be with his wife and new baby daughter.

A small group of "Celtics fans" took issue with that decision on social media, because this is where we are in 2016. And, of course, it was a hot topic on sports talk radio as well, with some hosts also calling out Boston's $30 million man. Local sports bloviator Michael Felger was one of them, taking issue with Horford's decision on CSNNE on Monday night:

"He had the birth of his kid in Atlanta. The game was in Miami. I know when you make $30 million a year it ain't much to get a private jet," said Felger. "[Celtics owner] Wyc [Grousbeck] would probably pick it up to fly down at 3 o'clock in Atlanta. It's about a 90-minute flight to Atlanta. Play the game and come right back."

Felger did add that he'd have no issues with Horford missing the game if there were complications with the birth. But he quickly mentioned how he only missed a day when his wife gave birth to their most recent child. Which is kind of funny, because isn't that what Horford just did?

"I like my guys to forsake everything for the team," said Felger. "It's a little soft. Just go play the game."

This is just Felger being Felger. But while Boston sports fans are used to his antics on the air, Horford's family is not. The Boston big man's sister was not a fan of the comments, and took to social media to voice her displeasure with Felger in a rather colorful way: 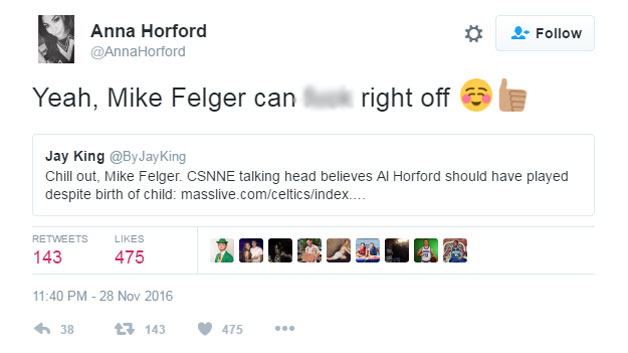 She was not alone, either. And it appears her Felger bashing earned Anna (and Al) some new fans on the Twitterverse. 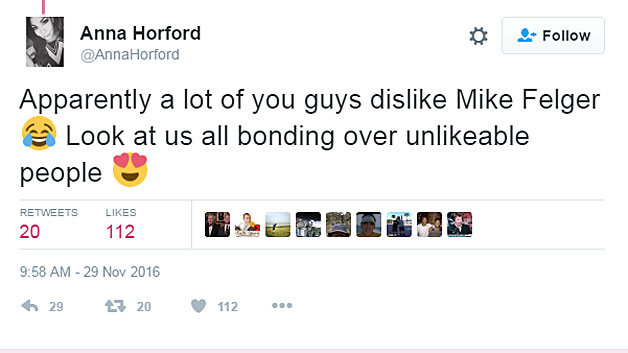 It's pretty ridiculous for anyone to criticize a player for missing a late-November game, against a massively undermanned opponent too, to be with their family on such an occasion. But that's just the kind of nonsense that lives in this never-ending news cycle, and really, just another day at the office for one Michael Felger.

Horford is expected to play Wednesday night when the Celtics host the Detroit Pistons.