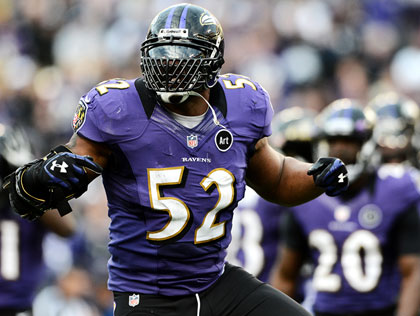 Wildcard weekend was fun, huh? Seattle went into Washington and knocked off the Redskins, with some help from some terrible field conditions and a knee injury to RGIII. Green Bay caught a break when Christian Ponder was scratched prior to the game, and the Vikings were forced to start Joe Webb (and Joe Webb, starting in the playoffs, on the road, in Green Bay went as well as you would have imagined. Ugh). Houston slogged through against the Bengals in a pretty forgettable game, and Ray Lewis got to celebrate a win in his last game ever in Baltimore with a win over the upstart Colts.  And oh yeah, we went 4-0 with the picks! Nice. It’s a great feeling going perfect with the weekend picks. But we all know what’s going to happen next, right? Yeah, the gambling gods are going to smack me down with a bad week. But let’s hope not.

I see some value in the card this week. The Falcons looks like its’ in a good spot to knock off the Seahawks, and I expect the Broncos to be firing on all cylinders against the Ravens this week. Houston should be able to hang in New England, and out west? I think the Packers have enough talent to pull a road upset in San Francisco. So check out the breakdowns below to see why and then next week it’s onto the Championship games. I still like my pre-playoff pick of Denver vs. Green Bay in the “big game” (see, I didn’t say Super Bowl so the NFL can’t sue me).

Stay in the loop. I usually tweet out some picks during the week and on game day, so follow me on Twitter (@Fantasource) to get the latest.

Let’s try to keep the perfect postseason in tact...

Denver, all day. I like the Broncos big in this one. Mainly because I don’t think the Ravens are very good, especially on offense. And they’re going to need to score at least 20 points if they expect to cover, not win, just cover and I just don’t see that happening. Baltimore is only averaging 18 points per game on the road this year, that’s not going to be enough to keep up with the high powered Denver offense.

This is a rematch of a Week 15 game where the Broncos won 34-17 in Baltimore, and it was a pretty dominating performance by the Broncos. Denver was winning that game 31-3 by the middle of the 3rd quarter. I expect more of the same this week.

We all know about Peyton Manning and the Denver offense but they have a pretty good defense, too. And I think that will make the difference here. Denver is second in the league in overall defense, and they should be able to slow down Ray Rice and the Ravens rushing attack. And Joe Flacco? He shouldn’t be a factor.  I’m thinking that Flacco will be seeing a lot of Von Miller and Elvis Dumervil this week. The last time they met in Week 15 the Ravens only managed 275 yards of total offense (and 92 of those yards came from two long touchdown passes from Flacco to TE Dennis Pitta), and they only managed only 56 yards on the ground. I think this game will play out the same, with Peyton Manning shredding the Ravens defense for a ton of yards as Denver jumps out to a big lead and never looks back.

Last week the Ravens played the Colts in Baltimore, they won the game 24-9 but they gave up 419 yards of total offense. So, if Andrew Luck can put up 419 yards on the road, how many yards do you think Peyton Manning will put up at home? Denver has scored 30 or more points in 11 of their 16 games this season, and they are averaging 32.5 point per game at home. They are 7-1 at home this year, with an average margin of victory of 19.2 points. That’s some home field advantage for the Broncos.

I like Denver to start their Super Bowl run this week but rolling over the Ravens. I’ll say 37-17 Broncos.

I think Aaron Rodgers and the Packers will get their revenge from the Week 1 30-22 loss to San Francisco. So much has changed since they met back in early September, most importantly the 49ers switched quarterbacks, benching Alex Smith and promoting Colin Kaepernick. So far, Kaepernick has played well as the starter, going 5-2 in seven games but this is the playoffs and playoff football is different and I think Kaepernick will learn that the hard way.

These two teams match up pretty well. Green Bay is 5th in the league on offense. San Francisco is 7th. Green Bay is 11th in defense. San Francisco is 4th. Both teams have playoff experience, and both are well coached. But this week I think it comes down to Packers QB Aaron Rodgers. Rodgers is playing lights out the past few weeks. Last week Rodgers led the Packers to a 24-10 lopsided win over Joe Webb and the Vikings. Sure, the Vikings D and the San Francisco D are light years apart in terms of talent but 4 weeks ago at Chicago, Rodgers put up a 116 QB rating against the #1 pass defense in the league. He will be ready.

The Packers defense is back at full strength with the recent returns of Clay Matthews and Charles Woodson and they will need both to play big games in order to pull the upset. San Francisco also gets a boost on defense if DL Justin Smith comes back this week. As of Thursday it looks like he will be playing after a Week 15 tricep tear. The Packers don’t really have a go-to running back so it will be all Rodgers, all day. And the 49ers know that they have to pressure him if they expect to win so having Justin Smith back will be huge.

But I think Rodgers will be up for the task this week, I expect him to have a big day against a good 49ers defense and I’ll say the Packers win a tight one, 24-23.

I’m pretty sure I’m not going to be on the popular side with this pick. I like the Falcons.

Yup, I know the Seahawks are the darlings of the NFL this season, and they pulled out a nice ‘come from behind’ road win last week at Washington but this week is a different story. They have to travel back to the east coast again to play a rested Atlanta Falcons team. But Falcons OT Tyson Clabo sees the travel issue a little differently than I do, "It's not like they're going to be going to the moon or anything,'' he said. That is true Tyson. Well put. But the old LA Rams in 1989 were the last west coast team to win back-to-back playoff games on the east coast. So, I don’t like this spot for Seattle.

I know a lot of people are saying that the Seahawks are the best team in the NFC right now, and they are the fancy pick to represent the NFC in the Super Bowl. Slow down. No way Seattle wins three playoff road games to make it to the Super Bowl.

Atlanta is a tough team at home, 7-1 this season with the only loss being in a meaningless Week 17 game against the Buccaneers. And Seattle, for all the hype they get were only 4-5 on the road this season (straight up and against the spread).

Last week Seattle went into D.C and beat a banged up Robert Griffin and the Redskins 24-14, but they were losing that game until midway through the fourth quarter. And let’s not forget that they quickly fell behind 14-0 in the first quarter.

I think the Atlanta passing game will be too much for the Seahawks. Yes, Seattle has a great defense, no question about that but they lost DE Chris Clemons last week with a torn ACL, he is the team leader in sacks. They are still strong on defense but the defensive front took a big hit with that injury. A weaker pass rush means more time for Ryan, which should be enough for him to get the ball to Julio Jones, Roddy White and Tony Gonzalez.

I know about all of the conventional wisdom in this game, “Falcons are over-rated”, “Matt Ryan stinks in the playoffs”, “Seattle is peaking at the right time” but I think a rested Falcons team at home will be up for the task, they should win and move onto the NFC championship.

This is a lot of points to give to the Texans, but there is a reason why the line is so high. These teams played back in Week 14 and the Patriots totally dominated the game, winning 42-14 and it wasn’t even that close. It was a massacre. Patriots went up 28-0 before Houston even got on the board. Before the line even came out last week I expected it to be around 10 points. That doesn’t mean I agree with it, but like Chris Rock says, “I understand”.

Last week the Texans beat the Bengals in a pretty ugly game. Houston was moving the ball ok, but they couldn’t seem to get it into the endzone. If they want to have any chance at winning this week they’re going to have to score touchdowns. Field goals just won’t do it against the Pats.

We always talk about Brady and the potent Patriots offense, and I know full well that they can put up points. But we forget that New England has a pretty average defense. They are giving up 373 yards per game on defense, which puts them 26th in the league. I think the Texans will be able to move the ball on Sunday and score enough points to at least keep it interesting.

On the other hand, the Houston defense is only surrendering 323 yards.  Which is good for 7th in the league, and last week they held the Bengals to only 198 yards of offense. Yes, Tom Brady > Andy Dalton, but still that’s an impressive showing against a playoff team.

Also keep in mind that when laying over a touchdown this season New England is 5-1 straight up but only 2-4 against the spread, it isn’t all blowouts for the Patriots like you might believe. And last year in the AFC Championship game against the Ravens the Patriots were 7-point favorites and only snuck by with a 23-20 win. So, winning but not covering is not unprecedented for the Patriots.

This week the Texans get an opportunity to exact some revenge for that Week 14 disaster, but I don’t think they have enough in the tank to pull the upset. I think the Texans give a valiant effort and keep it close but come up short in the end. Patriots win 27-24, but don’t cover.