For the first time since 2010, the Pittsburgh Penguins have advanced to the Eastern Conference Semifinals.

An overtime goal in Game 6 by Brooks Orpik closed out a hard-fought series against the New York Islanders.

The Penguins' reward in the second round is playing an Ottawa Senators team they are very familiar with.

In 2007, the Senators rudely welcomed the Penguins back to playoff hockey with a five-game beat down. The Senators went on to lose to the Anaheim Ducks in the Stanley Cup Finals.

In 2008, the teams met again and the Penguins made quick work of the Senators with a four-game sweep. As we all know, the Penguins went on to lose to the Detroit Red Wings in the Stanley Cup Finals.

In 2010, the Penguins knocked off the Senators in six games thanks to an overtime goal by Pascal Dupuis. The Penguins would then fall to the eighth-seeded Montreal Canadiens in the next round.

Combine all that playoff history with a freak accident that left reigning Norris Trophy winner Erik Karlsson with a partially sliced Achilles and if would be no surprise if this series gets nasty very quick. 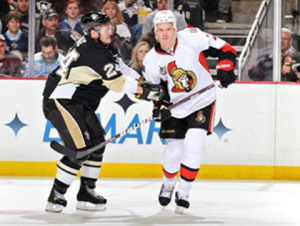 Of course, the incident I am referring to happened on Feb. 13 during a 4-2 Penguins win at CONSOL Energy Center.

We’ve all seen it. Karlsson and Matt Cooke race to a loose puck in the corner. Karlsson sees Cooke coming, initiates contact and Cooke’s left skate comes down on the back of Karlsson’s left ankle, thus causing the injury.

Everyone, and I do mean everyone, outside of Ottawa feels the play and resulting injury was a freak accident.

I understand the Senators being upset at seeing another one of their star players lost due to a freak injury. If anyone knows what they went through that night and the subsequent weeks of recovery that followed, it’s the Pittsburgh Penguins.

The man most upset by the play was and still is Senators owner Eugene Melnyk who launched an investigation into whether or not Cooke intentionally injured Karlsson.

The injury happened on Feb. 13.

Karlsson returned to the lineup on April 25 against Washington and played in three regular season games before the playoffs began.

The Senators qualified for the playoffs as the 7-seed.

The Senators easily dispatched the 2-seed Montreal Canadiens in five games in the opening round.

Karlsson had one goal and five assists in the series.

Melnyk’s investigation is still ongoing. No, seriously it is.

This storyline will undoubtedly be played up to no end. If we weren’t sick of it before, we will be when this series is over.

Senators At A Glance

Kyle Turris led the Senators with 29 points in the regular season. He also led the team with 12 goals.

As a team, the Senators scored 116 goals, which is the fewest of any team to qualify for the playoffs in the NHL. Conversely, they allowed only 104 goals, which was only second to the Chicago Blackhawks (102). 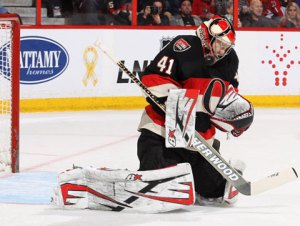 A large part of the Senators’ success was their stellar goaltending.

Craig Anderson only played in 24 games due to a sprained ankle, but posted a 12-9-2 record with a ridiculous 1.69 GAA and .941 save percentage. He also recorded three shutouts this season.

How They Got Here

The seventh-seeded Senators made quick work of the Montreal Canadiens in Round 1, defeating them in five games.

Alfredsson (two goals, four assists) and Karlsson (one goal, five assists) are tied for the team lead in points with six each.

Turris, Jean-Gabriel Pageau and Cory Conacher are tied for the team lead with three goals.

The Penguins swept the three-game season series and outscored the Senators 8-4. I’m not counting the goal awarded to the Penguins for winning a shootout in that total.

Alfredsson and Gonchar both had two assists to lead the team in points against the Penguins. The Senators’ four goals in the season series were scored by four different players. 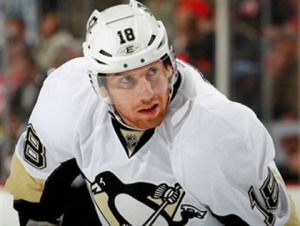 For Pittsburgh, James Neal led all scorers with three goals and one assist. Crosby was a close second with one goal and two assists.

Tomas Vokoun played in the third and final meeting of the season and allowed 1 goal on 35 shots. He will also be back in the net to start Game 1 Tuesday night.

As for special teams, both teams’ penalty killers were top notch in the season series.

The Senators were just 1-for12 on the power play, while the Penguins were only 1-for-15.

For the Senators, keep an eye on Conacher and Milan Michalek.

Sure, Karlsson and Alfredsson will be a major focus of the Penguins as well, but Conacher and Michalek have a tendency to fly under the radar at times.

Conacher was acquired at the trade deadline in a deal that sent goaltender Ben Bishop to Tampa Bay. He finished the regular season with 11 goals and 18 assists.

What he lacks in size at 5-feet-8-inches, he makes up for in speed and we saw what speedy forwards did to the Penguins in round one.

As for Michalek, he only played in 23 regular season games this year, but registered four goals and 10 assists. Against the Penguins Michalek has five goals and seven assists in 16 career games.

In their opening round win over the Canadiens, Michalek had one goal and one assist and was a plus-four. 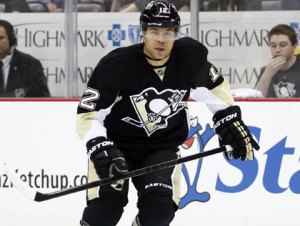 For the Penguins, keep an eye on Jarome Iginla and James Neal.

During Game 5, Iginla was finally moved to the right wing alongside Sidney Crosby and Pascal Dupuis. As the game went on, the line got stronger and more dangerous. Now that they have had a couple of games to gel, this could be a lot of fun to watch against Ottawa.

As for Neal, he was very quiet against the Islanders and part of that could be from the lower-body injury he suffered in Game 1. He’s had a couple days to rest up and I expect him to come out flying in this series. We all know what kind of chemistry he has with Evgeni Malkin and if he can get going, the Penguins will be even more dangerous.

KDKA-TV Predictions
(Note: I had to condense their predictions to fit this article. If you'd like to see their full analysis & predictions, click here)

KDKA-TV Morning News Co-Anchor Rick Dayton: The key to the series will be special teams. Pittsburgh's power play exploded in the first round and operated at a league-best 33 percent clip. Ottawa's penalty kill held Montreal to just 10 percent (2 for 20) -- and as they have said in hockey circles for decades, the best penalty killer is your goaltender -- and Anderson just might be the best in the business.

The old saying in baseball is that good pitching beats good hitting. Pens fans have to hope their offense is able to solve the Senators’ defense -- and they have to hope that if it is Fleury in net, he is markedly better than what he showed in Games 2-4 of the Eastern Conference quarterfinals against the Islanders.

Don't get me wrong, the Penguins can and should beat Ottawa. Pittsburgh won all three regular season games despite never scoring more than four goals against the Sens. The problem for Ottawa is that for long stretches this season they struggled to generate offense. If you expect the Penguins to score 30 goals in the series and win lopsided laughers, I think you will be disappointed. However, the Penguins will win and move into the Eastern Conference Finals.

KDKA-TV Reporter Ross Guidotti: This series will test the Pens more than the first round battle with the Islanders.

The keys to this series will be to match the speed and grit the Sens will bring to the ice. They’re established with veteran players including Sergei Gonchar back on the blue line as well as a possible return of Jason Spezza. Erik Karlsson is one of the best offensive-defensemen in the league. His play against the Canadiens was good enough and will likely only improve with each shift. Also, he’s not going to admit it, but the “Matt Cooke incident” will be running in the back of his mind and will fuel his desire to win.

Also, they won’t be facing a goaltender who was a human sieve like Evgeni Nabokov. Sens goalie Craig Anderson is playing like the best goaltender in the league. Do not underestimate Ottawa. This is a solid team and will make the Pens work.

PREDICTION: Hard, hurting, bloody and hateful, but the Pens in 7.

KDKA-TV Sports Anchor Bob Pompeani: This is a different challenge compared to the New York Islanders.

Ottawa does not have four lines with the speed of New York. They won't pose as much of a problem in the transition game as the Islanders did.

What they do well is get physical with their defensemen with all-in support of their goalie Craig Anderson, who has been one of the best in the NHL this year. The Penguins, it should be noted, have had success against Anderson, but he is far better than Evgeni Nabokov who, I thought, was terrible in the first series and the biggest reason why the Penguins advanced.

I think Brenden Morrow will be a much bigger factor in this series than last. Morrow looked slow comparatively to New York. Ottawa's style of game plays into Morrow's game. He's a banger and a guy who can cause havoc in front of Anderson. I firmly believe the Penguins will have to crash the net much more in this series and get rebounds, if Anderson gives any up.

PREDICTION: The Penguins are still the better team, I believe the Penguins will win this series in 6 games and move on to the Eastern Conference Finals.

My Prediction: I think the Penguins were issued a major wakeup call in the first round. This isn’t the regular season anymore, it’s the playoffs and if you want to win, you better show up and work for it.

The Penguins hung Marc-Andre Fleury out to dry at times and the result was him sitting on the bench for the final two games of the series. Vokoun stepped in and did an admirable job to settle things down and help the Penguins lock up the series.

However, if they want to beat the Senators they need to be more responsible with the puck and help out their goaltender. The forwards need to help out the defense to execute a fluid breakout as well. Basically, they need to be the team that showed up in Games 1 and 5 against the Islanders. Do that, and the Penguins will advance to the Eastern Conference Finals.

Game 3 – Penguins Vs. Senators at Scotia Bank Place – Sunday, May 19

Game 4 - Penguins Vs. Senators at Scotia Bank Place – Wednesday, May 22