WASHINGTON, D.C. (WJZ) -- Pope Francis will spend time in Washington during his September visit, stopping at both the White House and Congress on his first trip to the United States.

WJZ will bring you complete coverage on this historical visit.

Are you heading to Washington to meet the Pope? Plan ahead! Here's everything you need to know during the September 22-24 visit in Washington, D.C:

Who is Pope Francis?

Jorge Mario Bergoglio, more commonly known as Pope Francis, is the 266th pope of the Catholic Church. He was elected on March 13, 2013, and since then he's been known for his continual engagement with western and international politics.

Why is he coming to the states?

The Catholic church has around 1.2 billion members, and nearly 70 million of those members live in the United States. The Vatican has historically played a significant part in influencing U.S. elections and policy making when it comes to Catholic (and non-Catholic) voters.

His visit holds significance because it represents the United States' ties to the international community, and he's following a tradition that started even before his papacy.

When is he coming?

His first stop will be in Washington D.C. at Joint Base Andrews at 4 p.m. on Tuesday, September 22. He's scheduled to visit Washington D.C., New York and Pennsylvania before leaving the states to return to the Vatican in Rome.

Where is he going?

On his second day in Washington D.C., Pope Francis will arrive at the White House for a State Arrival Ceremony on Wednesday, September 23 at 9:15 a.m. Afterward, he is expected to have a private, informal meeting with President Barack Obama where they will discuss various environmental, social, economic and ethical issues.

Pope Francis will then be attending the Papal Parade along the Ellipse and the National Mall at 11 a.m. He will have Midday Prayer with U.S. bishops at Saint Matthew's Cathedral in D.C. at 11:30 a.m.

On Thursday, he will address the Senate and House of Representatives (Joint Session of Congress) at 9:20 a.m. That speech will be followed by his appearances at West Front of Capitol, St. Patrick's Catholic Church and Catholic Charities of the Archdiocese of Washington. He'll depart for John F. Kennedy International Airport in New York at 4 p.m., Thursday evening.

Upon reaching New York, the following day he'll address the United Nations General Assembly at 8:30 a.m. He's scheduled to then attend a multi-religious service at the 9/11 Memorial and Museum for the World Trade Center at 11:30 a.m. That service will be followed by a Papal mortorcade through Central Park at 5 p.m., and his attendance at Madison Square Garden Mass that same Friday. He'll then depart for Philadelphia International Airport on Saturday, September 26 at 8:40 a.m.

After Pope Francis arrives in Philadelphia at 9:30 a.m. on Saturday, he'll attend Mass at Cathedral Basilica of Sts. Peter and Paul at 10:30 a.m. and visit Independence Mall at 4:45 p.m.

On Sunday at 9:15 a.m., Pope Francis will have a meeting with Bishops at St. Martin's Chapel, St. Charles Borromeo Seminary. Afterward, he will meet with organizers and volunteers for the World Meeting of Families hosted at Atlantic Aviation at 11:30 a.m. He'll then host a mass at that same location at 4 p.m, which you can live stream here.

Pope Francis' final visit will be to the Curran-Fromhold Correctional Facility at 7 p.m., and he will then depart for Rome at 8 p.m., Sunday evening.

How can I see him?

If you are interested in seeing Pope Francis, here is a link to his official list of destinations. It includes which locations are open to the public and which ones require tickets.

What items are prohibited during the visit?

*Surrendered items will not be returned, or available for pick-up.

How will this affect you?

Here is a link to the general travel information concerning how his visit will affect traffic. Commuters near the area are strongly encouraged to look through this information to see how his six-day trip will affect your getting to work. 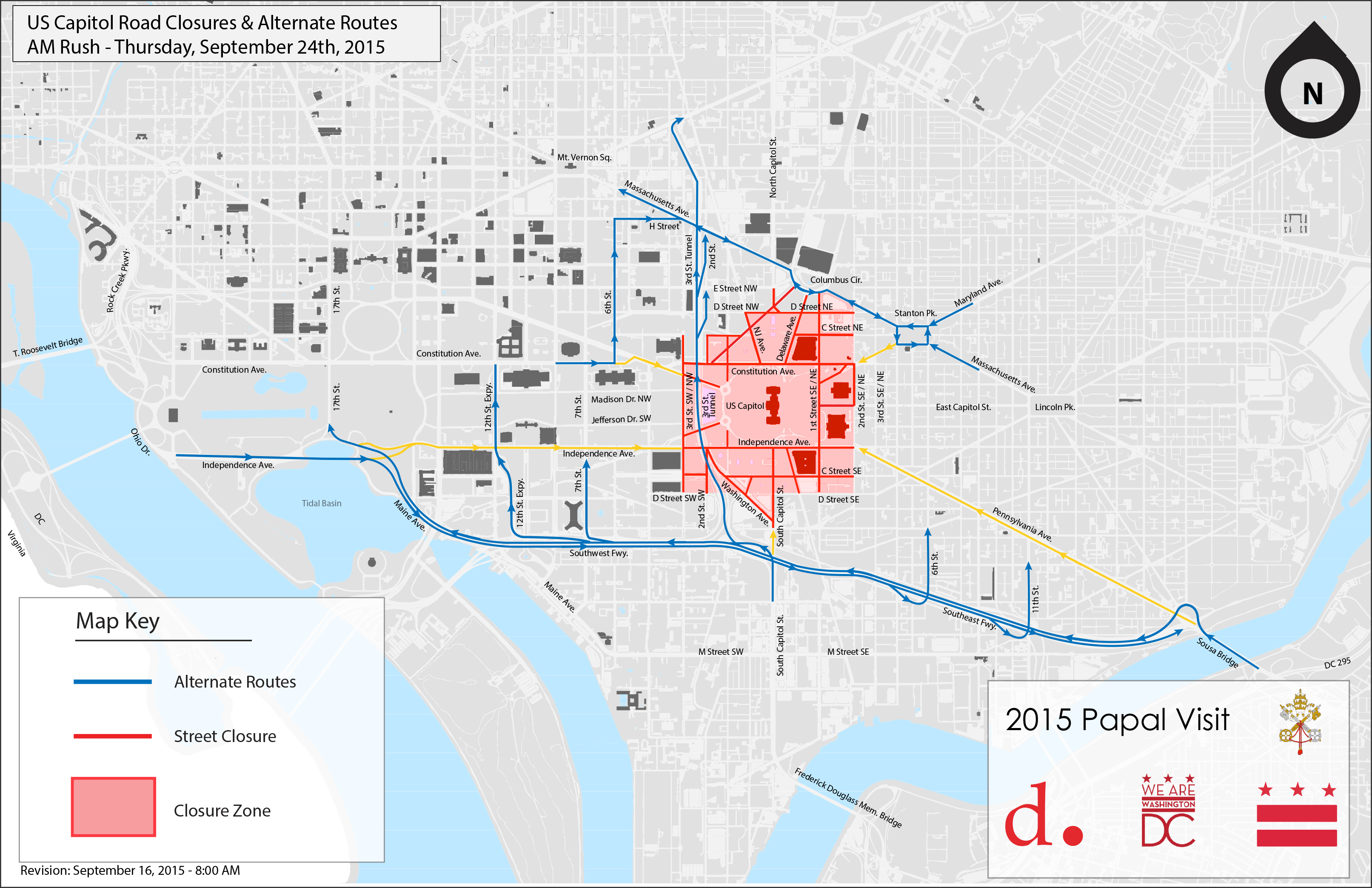 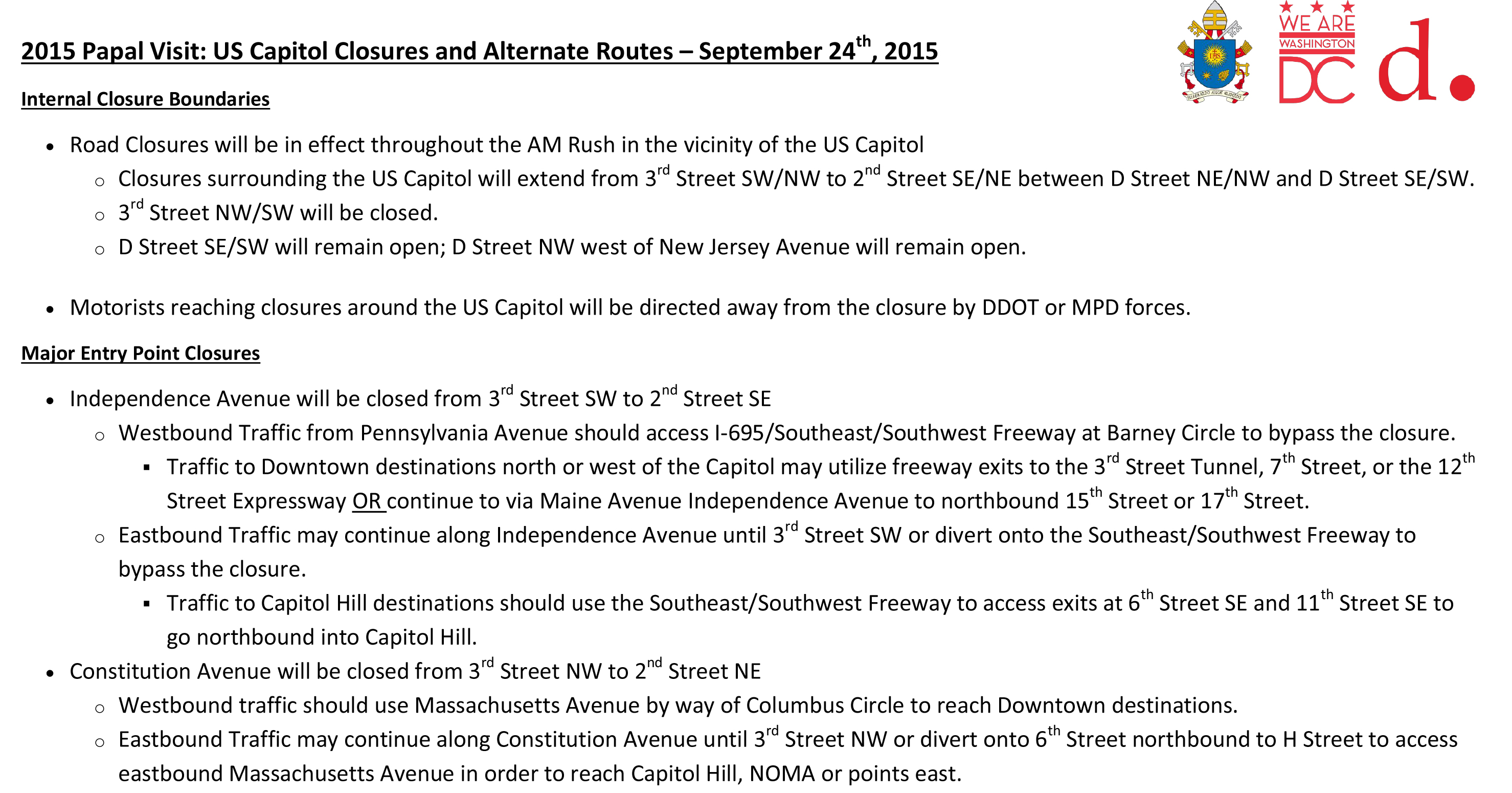 Looking for some Pope gear?

Everything from key chains and t-shirts to a life-size cutout of the Pope can be found HERE.