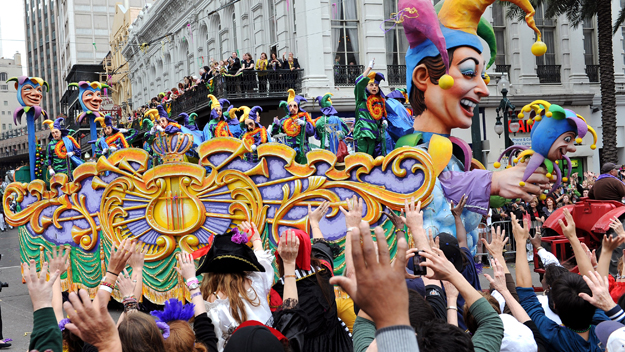 Recover from Valentine's Day and head straight into Mardi Gras. It's a busy time of year with Mardi Gras falling on Tuesday, February 17, 2015 and Lunar New Year commencing just two days later. Costume masks and beads at the ready, it's not too soon to think about where you'll party and with whom.

You cannot go wrong in a place with such a name. Live music on Thursday, Friday and Saturday nights is a regular happening for guests while they're enjoying "a taste of N'awlins" or the nightly happy hour. There's a host of cajun flavors: catfish, po'boys, jambalaya, crawfish étouffée, gumbo, blackened salmon, seasoned ribs and Southern fried chicken that hits the spot. Parties are held in the large room at the back of the restaurant, so join the fun or book your own party. Owner Dee W. Green, Jr. is from Bogalusa, Louisiana, on the banks of the Bogue Chitto River, where his mother's cooking was known far and wide.

Some of the fans say that the fresh crawfish at Crawdaddy that's shipped direct from Louisiana is like a party in your mouth. Seven years after introducing itself and its fresh shipments to San Jose, Crawdaddy opened a second location in Milpitas which is roomier and more modern, with a full bar, music and shorter waits. Updates are found on its Facebook page, including photos and descriptions of the live seafood shipments on arrival, so you always know when they're as fresh as can be.

A countdown to Mardi Gras is posted on Nola's website -- not just the days, but the hours, minutes and seconds. This spot has recreated a corner of Bourbon Street in a historic Palo Alto building with three floors and seven dining rooms dubbed as party central for Mardi Gras. For a cocktail, choose a classic hurricane to sip under your mask and beads. Try fried oysters or gumbo to start and then dig into a spicy Cajun New Orleans favorite such as seafood jambalaya or Delta crawfish, shrimp and scallop étouffée.

Calling itself San Jose's New Orleans joint, this restaurant in an old house throws a party with live music from 5 p.m. to 9 p.m. on both Lundi Gras (Monday evening) and Mardi Gras (Tuesday evening). In a location one block south of the SAP Center, it's known to be busy before and after games. Poor House Bistro has sound and a stage outside for bands on Friday and Saturday nights from 6 p.m. to 10 p.m. Order your hot po'boy or muffaletta sandwich at the counter or go with blackened chicken wings, gumbo, crawfish pasta, BBQ shrimp or jambalaya.

This is Mardi Gras Caribbean-style, like they do it back home (which is the meaning of "back a yard" in Jamaica). A funky soundtrack sets the mood in the big dining room covered with scenic murals, so everybody gets in the groove before the food is served. Enjoy the jerk or the BBQ chicken, pork, salmon, sausage or steak which is so good that it's been recommended by Michelin in 2015. Back A Yard suggests coconut water to cool the palate, followed by a sweet potato pudding dessert. Beer and sangria are also served.

Related: Best Sports Bars In The South Bay
Laurie Jo Miller Farr loves walkable cities. A tourism industry professional and transplanted New Yorker by way of half-a-lifetime in London, she's writing about the best of the bay and beyond for Yahoo, USA Today, eHow, and on Examiner.com.