SAN FRANCISCO (CBS SF) – In this election, an unprecedented amount of money is coming from Bay Area technology companies and their employees.

California has the sixth strongest economy in the world - only the U.S. as a whole, China, Japan, Germany and the United Kingdom had a greater GDP in 2015.

Whether it's PayPal founder and Facebook board member Peter Thiel pledging $1.25 million to Donald Trump, or Facebook and Asana co-founder Dustin Moskovitz's pledging $35 million over the last two months to help Democrats including presidential nominee Hillary Clinton, tech money is pouring into politics.

Thiel was also a delegate for Trump and spoke at the Republican convention in July. He held a press conference Monday expressing his continued support for Trump.

The total amount raised by candidates in this election cycle so far is $1.3 billion, plus $576 million raised by super PACs supporting their campaigns, according to Federal Election Commission filing data compiled by the Center for Responsive Politics.

Even in this expensive election, tech companies and their employees stand out as major contributors – giving well over $100 million to candidate campaigns, political committees and outside spending, including third-party political action committees (PACs). Many of those tech contributions are from employees at Bay Area technology companies that didn't exist a couple election cycles ago.

Post-Election Impact – Favors for Silicon Valley?
The findings of a field test released in the current issue of American Journal of Political Science by political scientists at UC Berkeley found that those who contributed to political campaigns secured preferential treatment from policymakers in Congress.

The authors performed the first ever randomized field test on the subject and found that senior policy makers made themselves available between three and four times more often when they were informed that prospective attendees were political donors.

Dr. Casey Dominguez, an associate professor in political science at the University of San Diego, said contributions can indicate political support, but agrees that it can be a way to buy a seat at a fundraiser, go to parties or "buy access" to a candidate. The amount of the donation matters, though. According to Dominguez, when someone gives a few thousand dollars -- "You can't be expecting to buy influence with that."

All the recent campaign giving shows, "The tech community has been finding its voice in politics," Dominguez told CBS San Francisco. She described that voice as generally aligned with Democrats on social issues such as climate change and gay marriage, but on corporate regulatory issues, they may side with Republicans.

On issues like intellectual property or immigration, tech companies are not neatly on one side or the other. For example, Dominguez explained that many tech companies are supporting legislation that would make it easier for highly-skilled foreign workers to come to the United States. But many Republicans object to foreign workers coming to the U.S., which is why Donald Trump's anti-immigration rhetoric has attracted many followers.

Tech Super PAC Contributors
Not all of the big bucks spent by California tech leaders have gone to winning candidates. With so many Republican candidates in the primary, many of the biggest conservative givers ended up backing candidates who have suspended their runs.

For instance, Thiel gave $2 million to the CARLY for America Super PAC which stands for Conservative, Authentic, Responsive Leadership for You and for America. 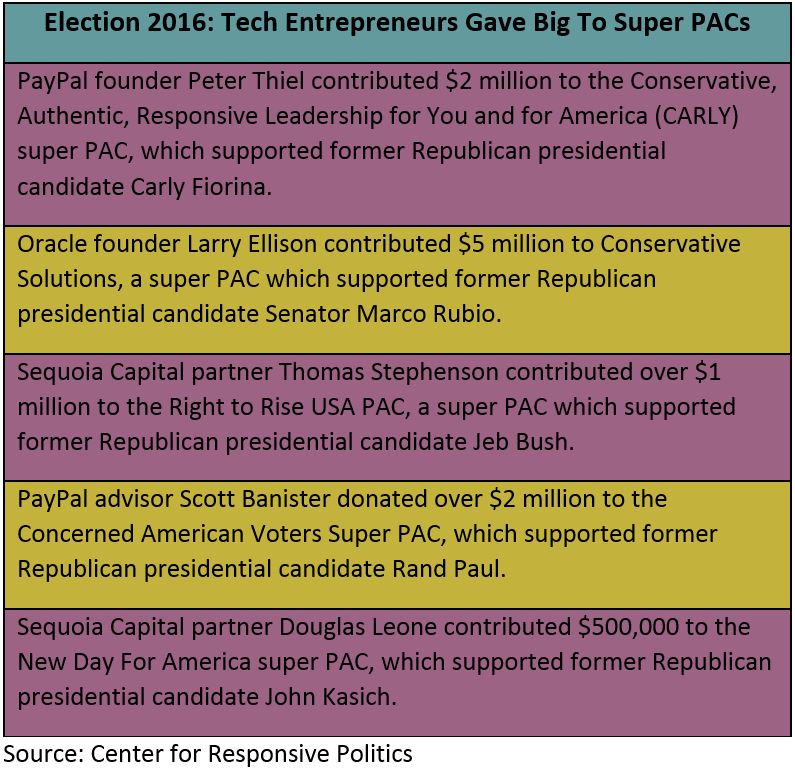 In February, Whitman refused to support Trump saying, "Donald Trump is unfit to be President. He is a dishonest demagogue who plays to our worst fears. Trump would take America on a dangerous journey."

In March, Whitman donated $100,000 to the anti-Trump super PAC, Our Principles PAC, and has since endorsed Clinton.

Napster co-founder and Palo Alto resident Sean Parker, donated $200,000 to Defending Main Street Super PAC, which supports moderate Republicans. He has also given $8.5 million this year toward Proposition 64, which would legalize marijuana for recreational use in California.

Tech leaders are also spending on the other side of the political divide, but most have bet on Hillary Clinton.

Jim Greer, co-founder of Kongregate gaming company, which was acquired by Gamestop, donated over $400,000 to a super PAC he created, called CounterPAC, which aims to remove the influence of money in politics by changing the incentive structure for politicians.

Company PACS
In addition to giving to super PACs or via individual donor contributions, many companies, including major tech companies, are giving via regular company PACs. While a super PAC can collect unlimited amounts of money but cannot coordinate with a campaign or give directly to a campaign or party, a regular PAC raises money and, subject to limitations, gives it directly to candidates or political committees.

"It is important for Facebook to develop relationships with elected officials and candidates for public office who share our vision of an open Internet and a culture of innovation."

Company PACs are prohibited from giving more than $5,000 in an election cycle to federal candidates, so the money they collect from their employees and others is largely contributed to candidates running for seats in Congress.

Marc Andreessen, co-founder of venture capital firm Andreesen-Horowitz, sits on Facebook's board and gave $5,000 to the Facebook PAC. His wife Laura also gave $5,000 to the PAC, as did Mark Zuckerburg, Sheryl Sandberg, Thiel and Elliot Schrage, Facebook's president of Communications and Public Policy.

Google NetPAC
This election cycle, the Google NetPAC has contributed over $1.4 million to Congressional candidates, giving almost 60 percent of contributions to Republican candidates and 40 percent to Democratic candidates.

"Google's political spending decisions are based exclusively on what's best for Google and an open Internet. Personal political preferences of Google executives, directors and employees play no part whatsoever in these decisions."

NetPAC campaign contributions, the Google website states, "are never made in return for, or in anticipation of, an official act" and decisions about contributions made by NetPAC are decided by the Google NetPAC Board of Directors, comprised of a bipartisan group of senior Googlers.

Professor Casey Dominguez said that while it is illegal for an employer to require its employees to donate politically, it may be that there is encouragement going on behind the scenes.

Employees may also be motivated to contribute to the PACs because it will benefit the company's bottom line and by extension, their equity in the company.

Google, Facebook and other tech companies tend to balance out funds across the different candidates and interests, making it difficult to see allegiances or motivations.

But electronics manufacturers and telecommunication companies are giving considerably more to Republican candidates running for seats in Congress.

Direct Campaign Donations
Apart from super PAC and company PAC donations, top tech executives and employees managing some of the biggest Silicon Valley companies' communications and government policies are also contributing directly to campaigns. These donations are limited to $2,700, per candidate, per election.

"It's my personal money. I made the maximum contribution to Hillary Clinton because I don't think I'd have a career in the technology industry if it weren't for the outstanding public STEM education I received in Arkansas, from schools and programs she pioneered in the 80s."

Eventbrite co-founder and president Julia Hartz, when asked if she could explain why she decided to donate $2,700 to Clinton's campaign, told CBS San Francisco, "Sure thing - because she's the most qualified candidate for the job."

Lily Wyden, a Facebook spokeswoman, made a personal contribution of $500 to Clinton, but declined to explain what moved her to do so.

Wyden was one of many communications or government policy employees at tech companies who donated to campaigns, but declined CBS San Francisco's request for comment.

Lobbying Influence
Regardless of what form political contributions arrive at candidates, Dominguez argues that the real influence comes with the lobbying of Congress.

"Hiring a lobbyist will do more in terms of influence," Dominguez said.

This may explain why tech companies have also hired lobbyists to increase their reach in Washington D.C.

Last year, tech firms spent $49 million paying Washington lobbyists, while the five largest banks shelled out less than $20 million, according to data compiled by the Center for Responsive Politics.

While lobbying expenses may seem high, companies justify the spending because they can make even more money if their lobbyists are successful.