SAN FRANCISCO (CBS SF) -- The lockdown at Balboa High School and three other nearby schools in San Francisco has been lifted and four suspects detained following an incident where a gun was found on campus, according to authorities.

SFPD tweeted shortly after 1 p.m. that there was no active threat at the school. One person suffered a non-life threatening injury during the incident and a firearm was recovered. The parents of the injured student have been notified. 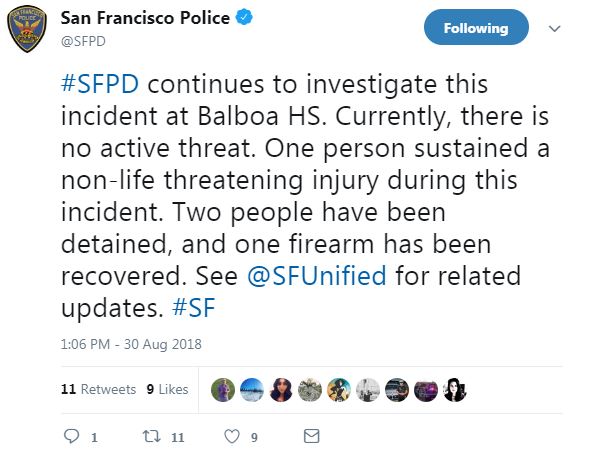 Police later clarified that a fourth Balboa High student was taken into custody after the incident.

Of the four students, only one is under investigation in connection with the firearm's discharge. The other three student suspects are being investigated as possible accessories after the fact.

It was also confirmed that the one injury sustained during the incident was unrelated to the gun discharge. A female student sustained a minor back injury. She was treated at the school and released to her parents.

Students at Balboa High were dismissed for the day shortly before 1:30 p.m. Parents would be notified by the school district where to pick up their students if necessary.

The three other area schools that were placed on lockdown -- Denman Middle School, San Miguel Early Education School and Leadership High School -- would remain in session with the school day continuing as planned.

Three teens were seen being taken from the school in custody by San Francisco police in video shot by Chopper 5 at about 1 p.m.

Shortly after 11:30 a.m., students were placed on lockdown and asked to stay in their classrooms and shelter in place following reports of a single gunshot, according to a student on campus.

There were dozens of officers and at least 15-20 police units at the school.

The San Francisco Unified School District sent out text and email alerts at about 12:07 p.m. notifying parents of the incident at the high school. The message said that students were safe and the police department was investigating.

Denman Middle School and Leadership High School were also on lockdown, according to the message. An automated phone call followed at about 12:15 p.m.

SFPD also tweeted about the incident at about 12:11 p.m.

San Francisco police and a representative for the SFUSD later confirmed that there were reports of a firearm on the Balboa High School campus at about 11:15 a.m.

Police are continuing their investigation into the incident and searching the Balboa campus. SFPD spokesperson Grace Gatpandan said they could not confirm whether the firearm had been discharged.

Officers with their weapons drawn could be seen walking around the perimeter of the school.

Many parents came to the school to wait for the end of the lock down to take their children home. They were stuck behind crime tape, waiting for word from school officials while their students were still sequestered inside Balboa High.

Balboa High parent Amia Taeotui doesn't take these moments for granted. And it's not just because she spent hours outside the school wondering about the safety of her boys who attend Balboa High.

"It's really emotional, because we just lost one of our family members to gun violence," Taeotui said with tears in her eyes. "And it's so hard to be here and go through this."

Her cousin Joe -- an anti-gun violence activist -- was shot and killed just two and half weeks ago.

When she found out her sons' school was locked down because of a gun she panicked and got there as soon as she could.

Taeotui said for her and her family, the events of Thursday were still an unwelcome reminder of their loss.

"Just love them, cherish them," she said as she cried. "Give them a big hug. It's so emotional."

"I was in the bathroom and they told me to put my hands up," said Montes. "I thought kids were just playing with me, but I walked out and saw a gun pointed at me and they had their shields. So I dropped my phone and put my hands up."

The students were finally allowed out when the lock down was lifted just after 1 p.m. They were clearly happy to be reunited with their parents.

"I'll probably just go home and hug my dad for the rest of the day," said student Thaai Lee.