The legendary New York burger joint is slowly growing its footprint in the Bay Area. In December, it opened its first Bay Area location in Palo Alto to rave reviews and long lines.

Now, the target is the upscale Marin market. Again, it was hard to find a disappointed customer. 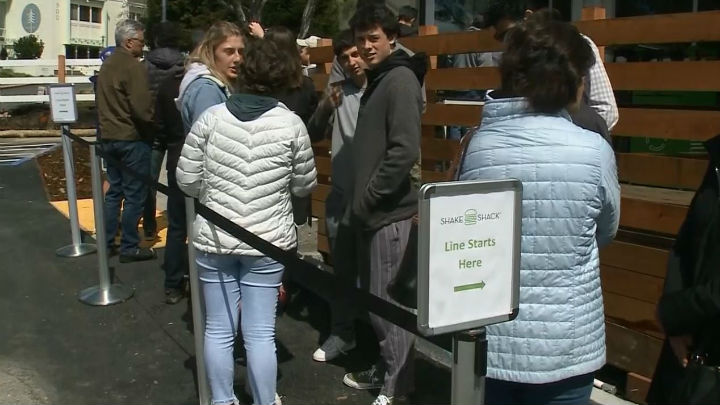 Among the connoisseurs of fine fast food was Ben Stoops, who already had selected a new favorite when it came to burgers.

"It's a school day. It's lunchtime. Decided to come to Shake Shake. It's a great day," he said.

When asked about his new favorites, Stoops -- who attended a friends and family event at the restaurant on Tuesday -- was quick with his answer.

"The smoke shake with bacon and cherry peppers on it. I'm going to say that's the bet burger in the menu," Stoops said. "And then there is the cookies and cream shake. The milk shakes are great."

Likewise, Daniel Duffy was also smitten with the oreo cookie and cream shake.

"I'm eating some amazing food," Duffy said of his lunch. "We got a long line here. The weather is beautiful. People are loving it."