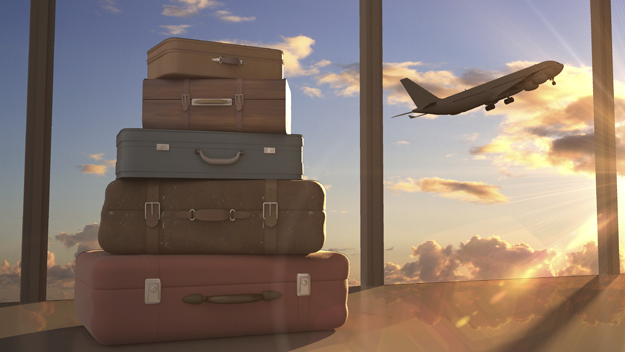 It doesn't matter if you're traveling for business or leisure, it's never been more important to safeguard your valuables. That's because not only do you have to watch out for pickpockets, but you also have to protect yourself from cyber criminals. While the vast majority of travelers will enjoy an incident-free trip, others might have something valuable stolen, such as a laptop, camera or a smartphone. To minimize the risk of theft, try using these five important tips on protecting your valuables while traveling.

There shouldn't be any reason to carry a large amount of cash regardless of the length of trip. ATM machines can be found most everywhere although it's important to be mindful of any charges when using one that isn't in your interbank network. If you plan to bring along more than one credit card, keep them in separate spots like one in the wallet and the other in a secure place such as a money belt. Lastly, consider leaving valuable items like jewelry and expensive electronics at home.

Related: How To Easily Book Last Minute Travel
Book A Hotel Room With A Safe

If you're staying in a hotel, one of the best forms of protection when traveling is your room safe. Most safes are easy to program and are large enough to store several items, including a laptop. Nevertheless, it's important to remember that hotel room safes can be easily opened by hotel staff in the event of an emergency or otherwise. If you're not staying in a hotel or uncomfortable with storing your valuables in a safe, you can store items in your luggage and secure it with a reliable lock. Alternatively, you can leave any of your valuables at the hotel desk.

One of the worst things to happen on a trip is to be the victim of a robbery. Not only will you feel violated, but you may also experience trouble getting back home, especially if your passport is lost or stolen. One excellent form of protection is to use a money belt, which are typically inexpensive and come equipped with two zippered compartments and an elastic strap to put around your waist. Other items worth considering are wallets, neck pouches, purses and backpacks featuring RFID blocking materials to guard against identity theft and anti-theft neck wallets for passports and other important documents. One important reminder is to be wary of your surroundings whenever you're exposing valuables in public.

Watch Out For Pickpockets

Even if you're using a money belt or some other protective item, you still run the risk of being pickpocketed. This is especially true when traveling internationally, where incidences of pickpocketing are much higher than in America. Among the worst cities for pickpockets are Barcelona, Rome, Prague, Paris, Buenos Aires and Amsterdam. Many thefts occur in crowded places such as subway trains and major attractions and some thieves are known to be so brazen, they'll run up to an unsuspecting victim and snatch their smartphone or other valuable and then dash off. Be especially careful of accidental bumps from a stranger in close corners and be aware that many thieves operate in groups, with some members tasked to distract a victim while another makes the theft.

Be Aware Of Your Surroundings

You've heeded all of the advice on protecting valuables, but if you aren't aware of your surroundings, you could possibly be robbed or worse yet, assaulted. Last year, more than three million mobile phones were stolen in America and accounted for about a third of all robberies. Thieves have been known to look for unsuspecting passengers using cell phones on board public transit and upon arrival at the next stop, the assailant grabs the phone and dashes off. It may be difficult for some cellphone users, but the best solution is to keep the valuable device hidden from view. Lastly, be especially aware of your surroundings when traveling alone, walking at night, using an ATM machine or entering an unknown area.

Related: How To Find Last-Minute Hotel Deals
Randy Yagi is a freelance writer covering all things San Francisco. In 2012, he was awarded a Media Fellowship from Stanford University. His work can be found on Examiner.com Examiner.com.