SAN FRANCISCO (KPIX) -- San Francisco Bay is playing host this weekend to a new sailing competition called Sail GP. The races are short, the boats are very fast and, if Saturday's crowd was any indication, it may be the wave of the future.

This is only the second season for Sail GP, an international sailing competition that patterns itself on the Grand Prix auto racing circuit. The 50-foot catamarans ride up out of the water on foils, turn on a dime and can reach speeds over 60 mph.

"Sail GP is all about high-adrenaline, close-to-shore racing," said chief marketing officer Erica Kerner. "It is the fastest boats on the water. It is absolutely incredible."

Unlike America's Cup, which is as much a technology competition as a boat race, Sail GP boats are identical so the races are won or lost by the skill of the sailors. This weekend is the season's last event and the prelims will decide who joins the U.S. and Australia in Sunday's final, single-race sprint for a $1 million.

"I think it's a great idea, I do, and this is the best place to sail," said racing fan Doug Roberts. "That's why they're going to end up here, because you're not going to find any place like San Francisco Bay." 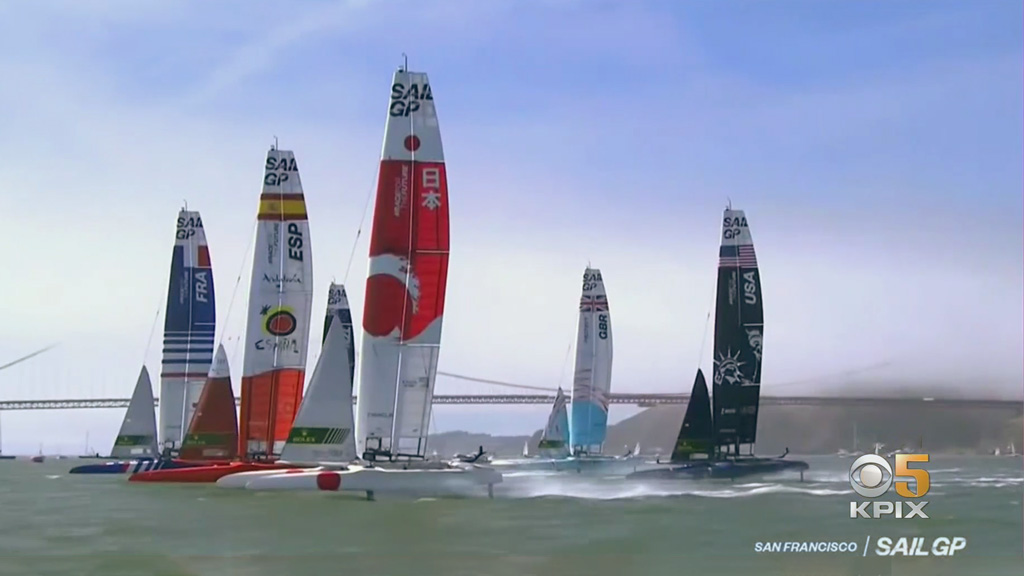 San Francisco Bay is an ideal venue for to watch a sailing competition. It features strong winds and provides an accessible waterfront giving people an up-close view of the action. The prospect of seeing boats moving so fast, so close to shore, brought out a huge crowd of spectators Saturday.

"It's doggone thrilling! Who doesn't want to be thrilled?" said Greg White, who traveled from Santa Barbara to watch the races. "This is pretty good stuff."

White, who is an avid sailor, said Sail GP is already having an impact on the racing community. He said America's Cup switched from single hulls to catamarans and are now also racing on foils.

"They realize they have to do something, because this is here to stay," White said. "There's a little bit of, 'I'm going to catch up with these other crazy fellows,' and good on 'em for it."

Sailing enthusiast Nate Bernardo thinks the shorter, 14-minute sprints of Sail GP may become more popular with the public than traditional yacht racing and the America's Cup might be in trouble.

"The America's Cup is more prestigious but Sail GP is a little bit faster-pace and I think it will appeal more to the younger demographic," he said. "That is the future."

There will be three races Sunday, two more qualifiers then the final, million-dollar race at 3 p.m. The event is centered at the Saint Francis Yacht Club and can best be viewed anywhere along the waterfront from Crissy Field to Marina Green.